Officials are the backbone of U.S. Figure Skating, ensuring fair competition for all skaters by enforcing the rules and regulations that govern the sport of figure skating. 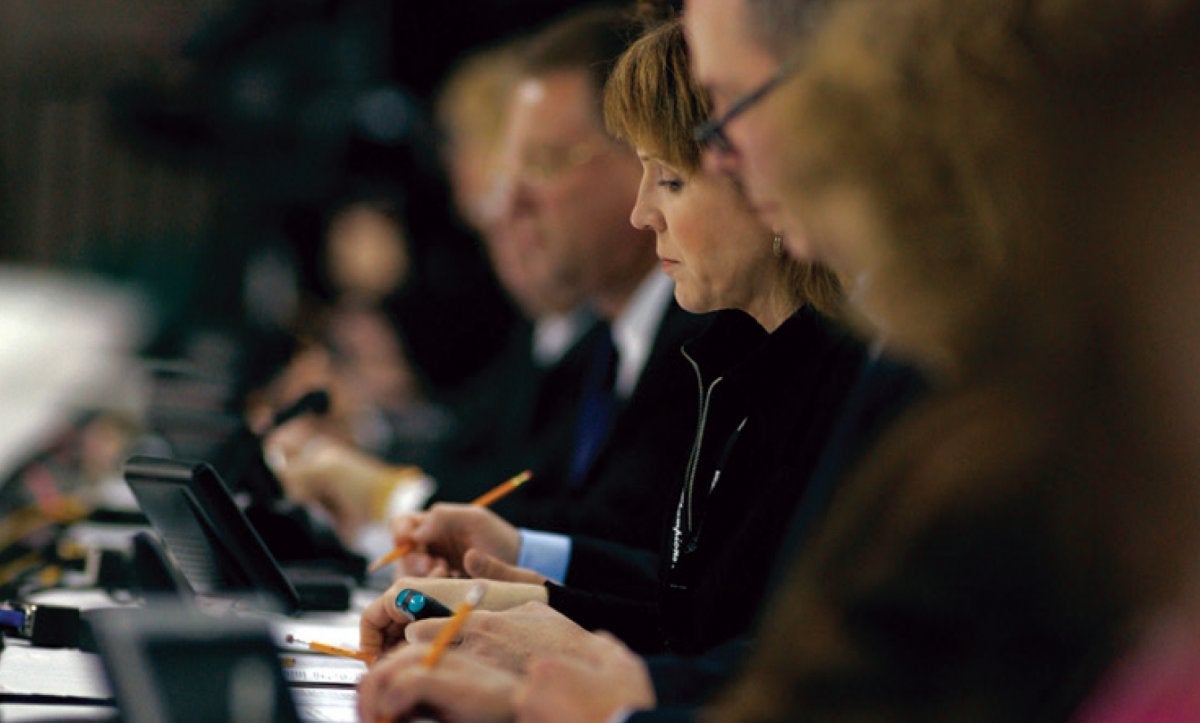 If you are interested in becoming an official, or are just getting to know the different types of officials within the sport, spend some time browsing the information below and using the form below with any questions.

The accountant's role begins weeks, sometimes months, before a competition. Working with the Local Organizing Committee and chief referee, accountants are responsible for preparing the paperwork that communicates the following information:

Accountants are also responsible for providing the judges, referees and technical panel officials with documents for recording their decisions. Finally, the accountants are responsible for ensuring that the scoring software is set up properly, the scores are entered accurately and the results are calculated correctly.

Technical accountants are a subset of accountants who specialize in the setup and operation of the rinkside computer equipment utilized for automated scoring under the International Judging System (IJS).

Announcers are responsible for announcing competitors before they perform at a competition. Announcers might also be asked to announce scores, names of officials and other general competition information as necessary.

As the voice of an event, announcers need to be able to work as part of a team and have the ability to communicate effectively with competition hosts, referees and other officials.

If you're interested in getting certified as an announcer and/or volunteering for your local club(s), begin by contacting clubs and competitions in your area to let them know of your interest.

Ice technicians are utilized at certain qualifying and international competitions to ensure the safety and quality of the ice surface. Primarily utilized at large competitions, the ice technician is the go-between for the event referee and arena personnel, and ensures each event runs safely and smoothly.

Individuals interested in becoming ice technicians should be willing to spend long hours at the ice rink on a daily basis during a competition. Usually the role requires arrival to the ice rink at least half an hour before the first event of the day and remaining until the last session is over.

To be able to serve as an ice technician at U.S. Figure Skating competitions, one first needs to be a Certified Ice Technician (CIT) through the U.S. Ice Rink Association. To become a CIT, an individual must complete the following three operations courses and pass the exams:

Once certified, the individual should let the U.S. Ice Rink Association know of his or her interest in serving at U.S. Figure Skating competitions.

For more information on becoming a CIT, please visit the U.S. Ice Rink Association's website and click on "Education.”

Judges are likely the most well-known type of figure skating official. Though the days of score cards are long behind us, U.S. Figure Skating still relies on judges to adjudicate competitions and interpret rules and regulations. Currently, judges work in all four skating disciplines and every competitive opportunity U.S. Figure Skating offers.

There are also two different classifications of judges:

Learn more about what it's like to be a judge.

Volunteers can serve as music officials at nonqualifying competitions without being certified as an official U.S. Figure Skating music technician. To do this, simply contact clubs in your area and let them know of your interest.

Referees are the designated leaders and spokespeople for an event. They also manage the panel of judges and, depending on the size of the competition, may serve as one of the event's judges as well. Before becoming a referee, one must be certified as a judge.

The event referee’s responsibilities include timing the programs, taking certain deductions (in IJS), deciding on all protests with respect to their event, conducting pre-event meetings (usually held at qualifying competitions) and allowing a skater/team to restart a program that has been stopped in accordance with U.S. Figure Skating rules.

Chief referees are responsible for setting up the competition schedule, assigning officials, overseeing seeding and draws for events, interpreting rules, deciding on protests and any breaches that occur without protests and determining if the condition of the ice will permit conducting the competition.

Becoming and serving as an official takes time, but it also has a lot of perks. First and foremost, getting to watch skating, usually from the best seat in the house, knowing you're making it possible for skaters to pursue their dreams by providing the support necessary for competitions and test sessions to be held. When you add on the ability to interact with wonderful and interesting people who also share a passion for figure skating, the decision becomes a no-brainer.

Start the process of becoming an official by completing this interest form.

In Person an Online Schools

There are two primary judging systems that are used to administer U.S. Figure Skating competitions:

The 6.0 system is still in use at some United States events as U.S. Figure Skating transitions to the International Skating Union (ISU) judging system, but the IJS is currently in use at all major competitions to ensure U.S. figure skaters are able to compete with other athletes on the world stage. .