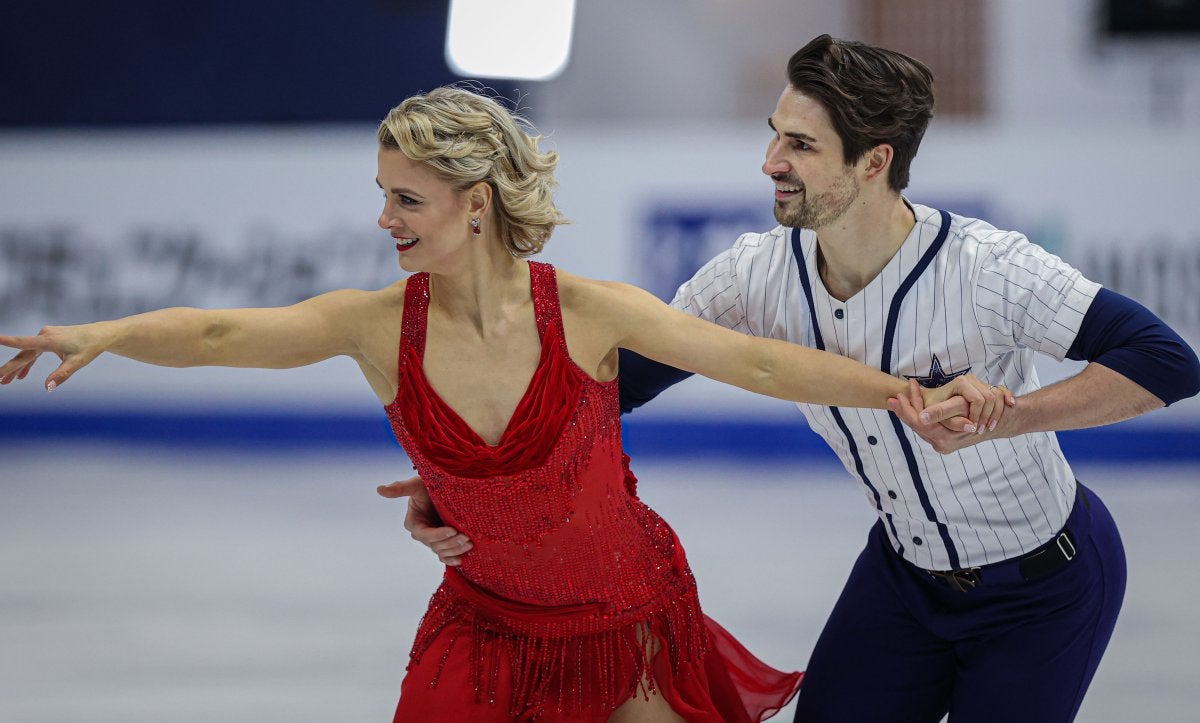 Hubbell and Donohue took the top spot in the rhythm dance scoring an international-best 85.95 points for their Marilyn Monroe-themed program. The two-time World medalists opened with Level 4 twizzles and notched over 2.50 points for their grade of execution for four of five elements.

“Zach and I felt great today,” Hubbell said. “It was a really strong performance. We felt it was our most precise of the season and we were happy to get a season’s best. Everything felt fun and easy.”

Chocks and Bates sit in second place after the rhythm dance with 85.76 points, also an international best. In their performance to “Too Darn Hot” by Cole Porter, the 2019 Four Continents champions had the top program components score of the field with 37.54 points. Just .19 points separate first and second place, the smallest margin in Four Continents history.

“It felt great,” Chock said. “I feel like this is the best we have performed our rhythm dance so far this season and that’s what we have been working towards, to keep building our performance and speed and fun in the program.”

Kaitlin Hawayek and Jean-Luc Baker finished seventh with 71.93 points. The 2020 U.S. bronze medalists’ routine to music from Saturday Night Fever received Level 4 marks for their twizzles, but had a fall late in the program.

In the ladies competition, Tennell was the top U.S. finisher in second place. In her short program to “Chronos/Mechanisms” by Kirill Richter, the 2018 U.S. champion opened with a strong triple Lutz-triple toe loop combination to notch 75.93, a new international best. Tennell also received all positive GOE and Level 4s on three elements.

“Overall I’m pretty happy with my short program tonight,” Tennell said. “I think I was very relaxed out there and really having fun. There were a couple little things that could have been better, but going into the free skate I feel really confident.”

Karen Chen is in eighth place with 67.28 points. The 2017 U.S. champion had an international-best skate to "You Say" by Lauren Daigle.

Amber Glenn placed ninth in the short program with 65.39 points. Glenn skated to "Scars" by Madilyn Bailey in her Four Continents debut.

Japan’s Rika Kihira won the short program with 81.18 and Young You of the Republic of Korea sits in third place with 73.55 points.

“I think our performance as a whole went really well,” Calalang said. “Besides the bobble on the jump, I really feel like we stayed focused and continued honing in on the program.”

Alexa Knierim and Chris Knierim placed fifth with 63.14 points. The 2020 U.S. champions skated to “At Last” by Beyoncé and received Level 4 marks for three elements.

In seventh place, Tarah Kayne and Danny O’Shea scored 62.65 points for their rendition of “Clair de Lune” by Claude Debussy.

Canadians Kirsten Moore-Towers and Michael Marinaro are in first place after the short program (76.36), while Chinese teams Cheng Peng and Yang Jin (75.96), and Wenjing Sui and Cong Han (73.17) sit and second and third place, respectively.

Competition continues tomorrow with the free dance and men’s short program. The event will be broadcasted on NBC and NBCSN throughout the week, as well as live and on-demand on the Figure Skating Pass on NBC Sports Gold. Visit competition central on the U.S. Figure Skating Fan Zone for more details.