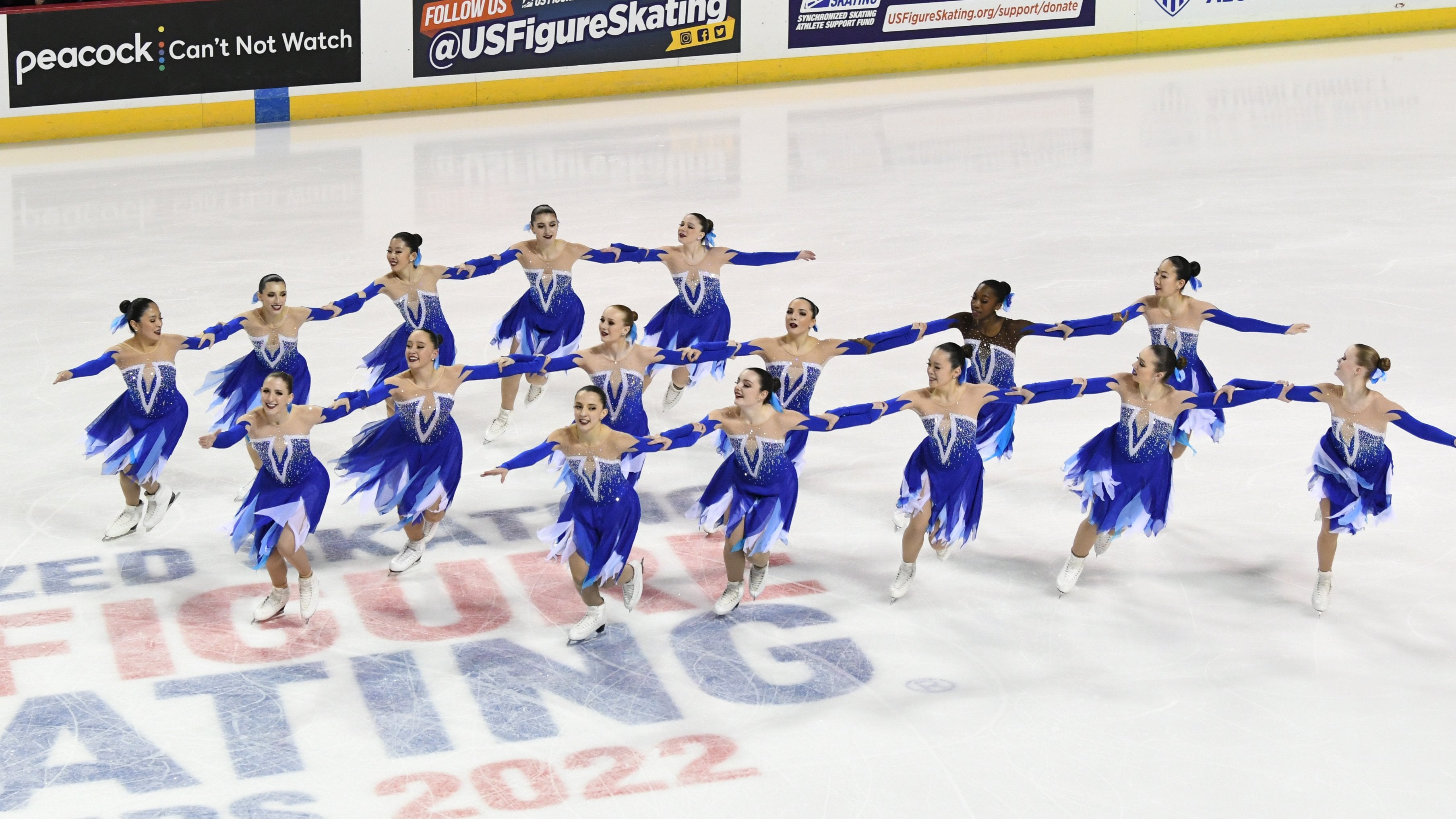 Team Image (Individual Member) made history on Friday night, grabbing their first-ever U.S. junior medal and winning the title in one swoop. In just their third season as a junior team, the New Jersey squad grabbed gold with a total score of 192.28 points. After winning the short program, Team Image came into the free skate with less than three points over the field. Their oceans-themed free skate earned 124.17 points and included Level 4 marks for their move element, pivoting black, synchronized spin, traveling circle and step sequence. They finished second in the free skate and were able to hold on to take home the junior trophy.

"It's every coach's dream to have two clean skates and for them to put that out at nationals (U.S. Synchronized Championships)," said head coach Cindy Kim. "We had gone for more hard powerful themes before this season and I really want them to be more expressive and kind of take it back to traditional, beautiful quality skating so I chose this music to emphasize that."

For the second consecutive Championships, Teams Elite (Individual Member) earned the silver medal in the junior competition. The Illinois-based crew was third after the short program and won the free skate to tally 190.85 points. Their Missy Elliot medley featured a Level 4 synchronized spin, intersection, move element and pivoting block. They also had the highest program components of the night with 65.02 points.

Skyliners junior finished third overall with 175.95 points. Their free skate called the "Two Faces of Gemini" included a Level 4 pivoting block, intersection and move element. They had a fall in each of their intersections and placed fourth in the free skate with 110.21 points. With their bronze medal, the team out of the Skating Club of New York has finished in the top three for six consecutive Championships.

Teams Elite (Individual Member) ran away with the intermediate title to kick off competition on Friday afternoon. The Illinois-based team tallied 79.57 points to top the field by over nine points and set a new season's best. Their video game-themed program notched Level 3 marks for five of seven elements, including an intersection that received 7.70 points. This marks their fourth-straight Championships in the top three and second intermediate title.

"We worked so hard for this," Teams Elite skater Angelina Arakelian said. "Everything we have done in practices, double run throughs with KN-95 masks on, it all paid off."

The Capital Ice Chips (Bismarck FSC) earned intermediate silver for the second consecutive time with 70.42 points. Their program inspired by mental health awareness included a Level 3 traveling circle, no-hold, intersection and move element. The team unfortunately fell coming out of their intersection, but otherwise received all positive grades of execution.

The Haydenettes (Individual Member) soared to the top of the pack in the senior short program, earning 79.13 points. The 28-time U.S. champions skated to "Sweet Dreams" by Dave Stewart and His Rock Fabulous Orchestra and earned Level 4 marks for their intersection, traveling circle, no-hold and step sequence. The Boston-based team had the top technical score and program components with 42.44 and 36.69 points, respectively.

"Tonight was just about finally getting out there, enjoying the ice, enjoying each other, enjoying the crowd and just doing it for ourselves and having a good time," Haydenettes skater Ava Dimmick said. "We love this program."

The Skyliners are in third following the short program, earning 71.47 points for their skate. Performing to "Everybody Wants to Rule the World", the Skating Club of New York squad notched Level 4s for their traveling circle, intersection and no-hold and step sequence. The team had a fall late in the program, but still received all positive grades of execution.

Adrian College Varsity Team (Adrian College) is in fourth place with 61.70 points. Skating to "Waloyo Yamoni" by The Water & The Wind, the Bulldogs earned 9.00 points for their intersection, but had a collusion in their traveling circle that cost them two points.

The Crystallettes (Dearborn FSC) are in fifth place with 53.14 points after their short program set to "You Will Be Found" from the Dear Evan Hansen soundtrack.

Competition concludes tomorrow with the juvenile, adult, collegiate and senior free skates. The junior, senior and collegiate competition can be streamed live and on-demand on Peacock Premium. The juvenile, novice, intermediate, adult and masters competition are available on Video Corner on the U.S. Figure Skating Fan Zone. Fans can also follow along on the competition central page.