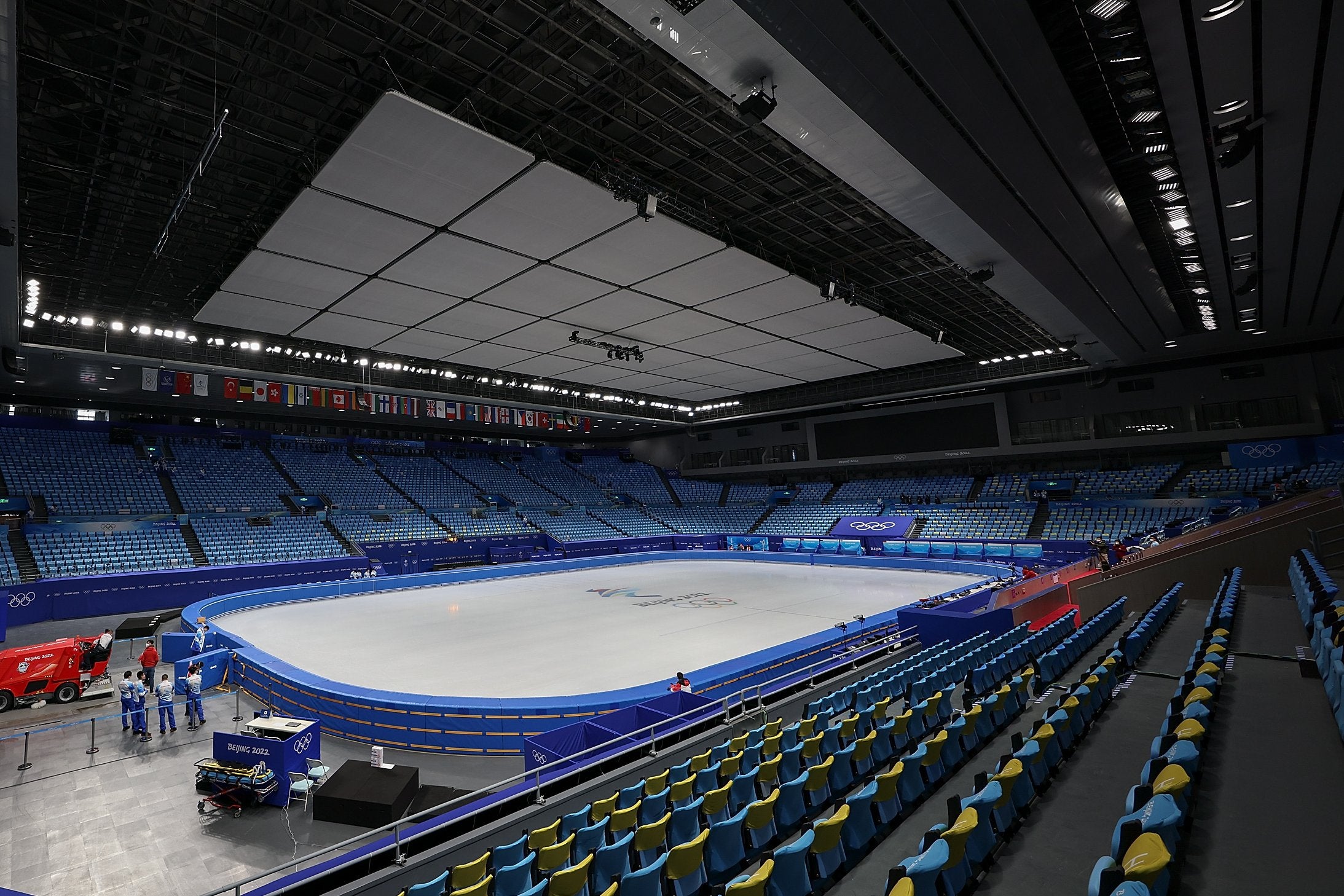 The U.S. Olympic Figure Skating Team has nine returning Olympians, including past Olympic medalists Jason Brown, Nathan Chen and Alexa Knierim. They will be joined by four-time Olympian Evan Bates, who is joined by his partner, three-time Olympian Madison Chock. Ice dancers Madison Hubbell and Zachary Donohue, Karen Chen and Vincent Zhou will be appearing in their second consecutive Olympic Winter Games.

The networks of NBC and NBC's Peacock will broadcast live coverage of all 11 days of figure skating competition. Please visit the U.S. Figure Skating Fan Zone or www.nbcolympics.com for more information.

Women
Mariah Bell – The 2022 U.S. champion is making her Olympic debut in Beijing. The oldest U.S. Olympic women's figure skater since 1928, Bell, 25, has made four World Teams, and finished ninth 2019.

Karen Chen – The 2017 U.S. champion is making her second Olympic appearance fresh off of a silver medal at the 2022 Toyota U.S. Figure Skating Championships. Chen's free skate and fourth-place finish at the ISU World Figure Skating Championships 2021 helped secured three entries for the United States at this year's Olympic Winter Games. Chen finished 11th in the ladies competition at the 2018 Olympic Winter Games

Alysa Liu – Liu makes her Olympic debut as the youngest member of Team USA. The 2019 and 2020 U.S. champion, Liu's title at 2021 Nebelhorn Trophy helped confirm the Americans' three women's entries at this year's Olympic Winter Games. At the 2022 U.S. Championships, Liu was third after the short program but withdrew after testing positive for COVID-19.

Men
Jason Brown – Brown makes his return to the Olympic stage after an absence in 2018. Brown's "Riverdance" program propelled him to the World stage at the 2014 Olympic Winter Games in Sochi, Russia, where he earned a bronze medal in the Team Event. After the 2018 season, Brown moved to Toronto to train at the Toronto Cricket Club under Tracy Wilson, Brian Orser and Karen Preston.

Nathan Chen – Six-time U.S. champion and three-time World champion
Chen returns to the Olympic Winter Games after earning a bronze medal in the 2018 Team Event and finishing fifth overall in the men's event. Chen, who had a disappointing short program in PyeongChang, won the free skate with the highest free skate score in history. Since the 2018 Olympic Winter Games, Chen has won all but one competition that he has competed in.

Vincent Zhou – Zhou returns to the Olympic Winter Games after making his debut in 2018 with a sixth-place finish in the men's event. Since 2018, Zhou has earned a World bronze medal (2019), a Four Continents bronze medal (2019) as well as three ISU Grand Prix medals, including gold at 2021 Guaranteed Rate Skate America. Zhou's first-place finish at 2021 Nebelhorn Trophy helped confirm three entries for the Americans in the men's competition at this year's Games.

Pairs
Ashley Cain-Gribble and Timothy LeDuc – Cain-Gribble, a former singles skater, and LeDuc paired up in 2016 (LeDuc was performing on a cruise ship at the time) and earned the pairs title in 2019 and 2022. The duo is coached by Cain-Gribble's parents, Peter and Darlene Cain, and train in Cain-Gribble's hometown of Euless, Texas. LeDuc is the first openly non-binary athlete to appear at an Olympic Winter Games.

Alexa Knierim and Brandon Frazier – Knierim and Frazier teamed up in 2020 just as the COVID-19 pandemic began. Knierim, who earned a bronze medal in the team event at the 2018 Olympic Winter Games in Pyeongchang, skated with her husband, Chris, until his retirement in 2020. Alexa and Chris won three U.S. titles together. Frazier, a 2017 U.S. champion with his former partner Haven Denney, is making his first Olympic appearance. The duo won the U.S. title in 2021 and did not compete at the 2022 U.S. Championships after Frazier tested positive for COVID-19.

Teamwork Makes the Dream Work…
Team USA's first opportunity to medal in Beijing will come in the Olympic Figure Skating Team Event, which debuted in the Olympic program in 2014. Team USA has won bronze the first two iterations of the event (2018, 2014).

Each team will consist of one woman, one man, one pairs team and one ice dance team to be selected from athletes who have qualified in their individual disciplines. Each nation will be allowed to make up to two exchanges after the short program/rhythm dance. The team event will consist of the 10 best national teams from NOC/ISU members and the five teams with the highest number of points after the short program/rhythm dance will qualify for the free skate/dance. Athletes receive points based on their finishes in each segment of competition. The team with the most aggregate points through eight segments of competition will win.

Entries to the team events will be announced at the following times (in Beijing time):

*Bay Area - The Bay Area is home to Alysa Liu, Karen Chen and Vincent Zhou. All three now train in Colorado Springs, Colorado, but grew up and trained in the Bay Area earlier in their careers. The area is home to U.S. figure skating greats Peggy Fleming, Brian Boitano, Rudy Galindo, Debi Thomas and Kristi Yamaguchi.

*Colorado Springs – The home of the U.S. Olympic and Paralympic Committee, pairs skater Brandon Frazier lists his hometown as Colorado Springs and spent many years training and going to school in Olympic City, USA. His partner Alexa Knierim also used to train out of Colorado Springs. Three athletes—Karen Chen, Alysa Liu and Vincent Zhou— currently train at the World Arena Ice Hall, which is connected to the Broadmoor World Arena. Additionally, Mariah Bell and Jason Brown both spent considerable amount of time training in Monument, Colorado, a northern suburb of Colorado Springs.

*Detroit – All three American ice dance teams have ties to Detroit. Madison Hubbell and Zachary Donohue trained in Bloomfield Hills, Michigan, through the 2015 season and now train in Montreal. Hubbell is from Sylvania, Ohio, which is just south of Detroit. Madison Chock and Evan Bates trained in Novi, Michigan, until 2018, and also now train in Montreal. Bates earned a bachelor's degree in organizational studies from University of Michigan in 2013. He is the 52nd member of his family to graduate from University of Michigan. Kaitlin Hawayek and Jean-Luc Baker also trained in Novi before heading to Montreal in 2018.

A Family Affair…
Ice dancer Jean-Luc Baker and pairs skater Ashley Cain-Gribble are making their respective families' second appearance at an Olympic Games. Baker's mother, Sharon Jones-Baker, was an ice dancer for Great Britain at the 1988 Olympic Winter Games in Calgary. Of note, Baker's father, Stephen Baker, was a former pairs skater for Great Britain, where he won the 1976 World Junior title. Cain-Gribble's father and coach, Peter Cain, competed at the 1980 Olympic Winter Games in Lake Placid, New York, with Ashley's aunt, Elizabeth Cain, under the Australian flag. Cain-Gribble's mother and coach, Darlene Cain, was an ice dancer for Canada. Of note, Stephen Baker competed against Peter Cain in the late 1970s when Peter and Elizabeth were permitted to compete at the British Championships.

Rippon Returns…
Adam Rippon made his Olympic debut at the 2018 Olympic Winter Games in PyeongChang, where he earned a bronze medal in the team event and finished 10th in the men's event. He became a household name through appearances on NBC properties, and later won Dancing with the Stars before becoming a popular American media personality. In 2022, he returns to the Olympic stage as a coach for American skater Mariah Bell. Rippon trained with Bell until retiring after the 2018 Olympics and joined her team in Irvine as a coach and choreographer.

Rippon isn't the only member of 2018 coaching a member of the 2022 squad. Chris Knierim, while not in Beijing, joined the coaching team for his wife Alexa and her partner Brandon Frazier.