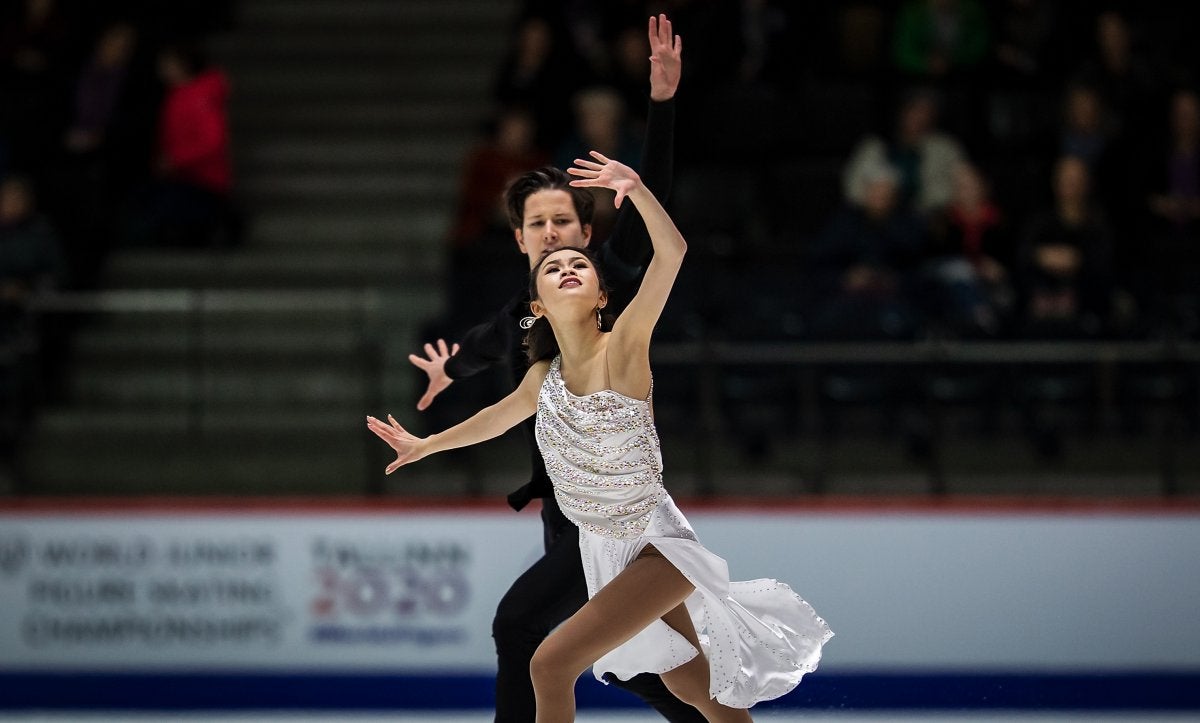 Nguyen and Kolesnik were in third place coming into the free dance on Saturday with less than two points separating them from the top of the podium. The 2020 U.S. junior champions were the final team to skate and rallied for an international best performance to "Piano Concerto No. 2" by Sergei Rachmaninoff, collecting 108.91 points. Their grades of execution ranged from 1.57-3.20 points and helped them earn a technical score of 58.64, nearly three points higher than the rest of the field. With an overall score of 177.18, another international best, Nguyen and Kolesnik secured the ice dance title after narrowly missing the podium last season.

Also in the ice dance competition, Katarina Wolfkostin and Jeffrey Chen scored 159.20 total points to place seventh in the competition. The new team out of Michigan tallied 94.43 for their free dance to music by Sam Smith, earning Level 4 marks for their stationary lift, twizzles, curve lift and combination spin. With a first- and seven-place finish, the United States secured three ice dance spots at next year’s World Junior Championships.

Oona Brown and Gage Brown were 11th coming into the day and finished ninth in the free dance to take the 10th spot overall with 152.05 points. The sibling duo earned 92.55 points for their performance to "Bloodstream" by Tokio Myers and "Air" by Jan Werner. In their World Junior debut, the New Jersey-based team earned international bests for the rhythm dance, free dance and overall score.

Georgians Maria Kazakova and Georgy Reviya earned the silver medal with 176.19 points, and Elizaveta Shanaeva and Devid Naryzhnyy of Russia grabbed bronze with 175.17.

In the ladies competition, Liu rallied from her fourth place short program to finished third in the free skate and overall. The two-time U.S. champion had the second highest technical score in the field with 78.12 points. Despite a fall on her quadruple Lutz, Liu went on to land a triple Axel and six additional triple jumps. She also received Level 4 marks for all of her non-jumping elements. Scoring 137.31 points for her performance to "Illumination" by Jennifer Thomas, the 14-year-old collected 204.83 points to secure the bronze medal in her World Junior debut.

Starr Andrews placed eighth in the ladies competition with a total score of 180.87 points. Her free skate to “Salome” and “Dance of the Seven Veils” by Richard Strauss opened with a strong triple toe loop-triple toe lop combination and included four additional triple jumps. The California native scored 115.56 for her performance and helped Team USA lock in three spots for the 2021 ladies event.

Lindsay Thorngren finished 26th in the short program and did not qualify for the free skate.

On-demand replays are  on the ISU YouTube page. Follow along with Team USA on U.S. Figure Skating Fan Zone.