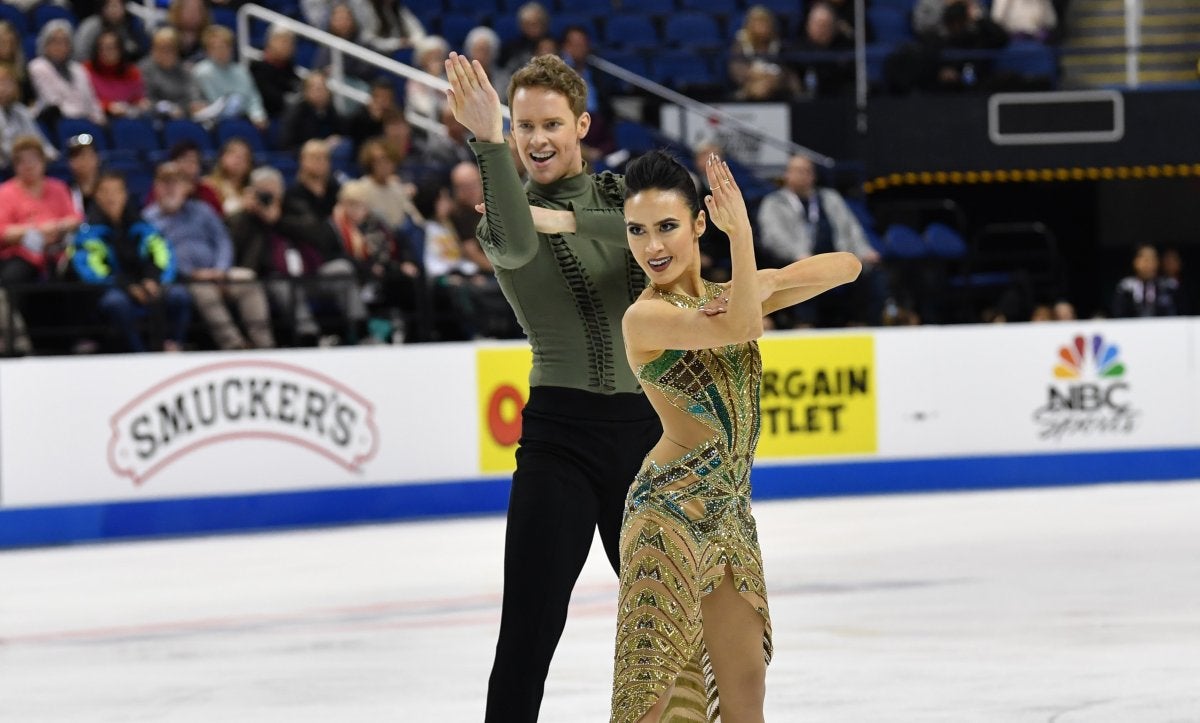 Chock and Bates were in second place after the rhythm dance by just .19 points. In their Egyptian-themed free dance, the 2020 U.S. champions notched Level 4 marks on five elements, including a curve lift-curve lift combination that earned 14.92 points. Despite a fall, they earned 127.42 points for their performance to tally 213.18 overall and defend their title.

“We are so happy to be back here in Korea at Four Continents,” said Chock. “It was a bit of a fight today in parts, but overall we still really enjoyed ourselves and had a good time performing our free dance. This program brings us so much joy and it’s a pleasure for us to perform every time.”

Hubbell and Donohue also found a spot on the podium in Seoul, earning 208.72 total points to secure the bronze medal. They earned 122.77 points in their program set to music from A Star is Born, which included four Level 4 elements and all positive grades of execution.

“I would say that this free dance has been a little bit of a challenge for us this season,” Hubbell said. “I’m a little bit sick of saying, ‘It wasn’t a great performance.’ I think we have to look at what we did well and we are improving. We have to go back to the drawing board a little bit with our team back home and figure out what to improve and show the strength that we have as a team.”

Kaitlin Hawayek and Jean-Luc Baker finished sixth overall with 188.49 points. After finishing seventh in the rhythm dance, they rallied to a fifth-place free dance scoring 116.56 points for their performance to “Beethoven’s Fifth” and “Paganini’s Caprice” No. 24 by Marcin Patrzalek.

Canadians Piper Gilles and Paul Poirier won the silver medal with a total score of 210.18.

In the men’s competition, Brown led the U.S. contingent and is in third place after the short program. In his clean routine to “I Can’t Go On Without You” by Kaleo, the 2020 U.S. silver medalist had the second highest program components score with 45.90 and notched Level 4s for his four non-jumping elements. With 94.71 points, Brown also secured a new international best score.

“Coming to Four Continents and as the season goes on, you always want to keep improving your score,” Brown said. “I’ve had a really rough early part of the season, so to be able to really learn from those events and come out and do a strong program at Four Continents Championships, I’m really proud of that.”

Tomoki Hiwatashi is in eighth place with 88.09 points heading into Sunday’s free skate. The 2020 U.S. bronze medalist opened with a quadruple toe loop and had all positive grades of execution in his clean skate to "Love Runs Out" by One Republic.

In his Four Continents debut, Camden Pulkinen scored 84.66 points for his program set to "Caruso" by Josh Groban. He is currently in 10th place.

Japan’s Yuzuru Hanyu is in first place with 111.82 points and Boyang Jin of China sits in second place with 95.83 points.

Competition continues tomorrow with the ladies and pairs free skates. The event will be broadcast on NBC and NBCSN throughout the week, as well as live and on-demand on the Figure Skating Pass on NBC Sports Gold. Visit competition central on the U.S. Figure Skating Fan Zone for more details.