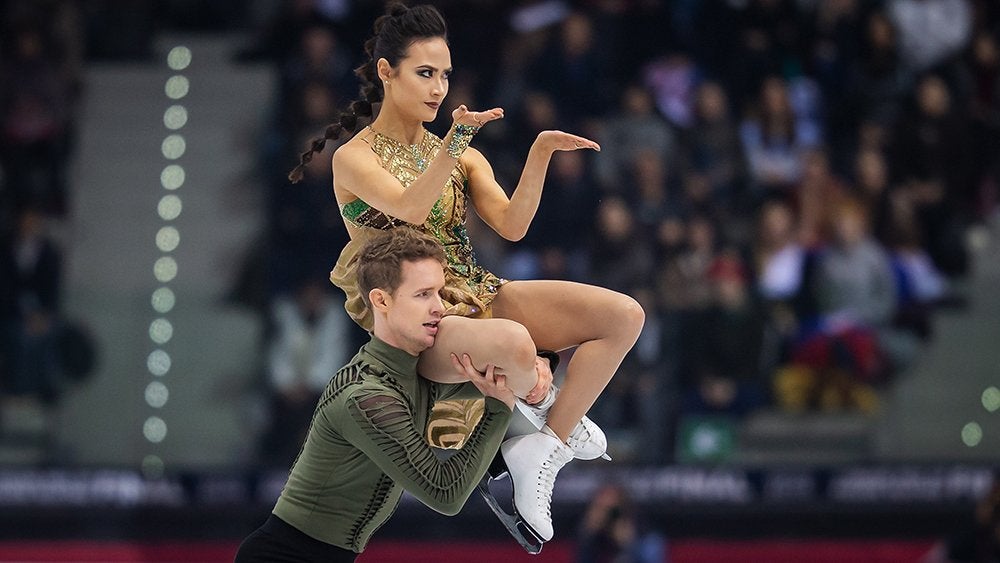 (1/25/20) - The pairs team of Alexa Knierim (DuPage FSC) and Chris Knierim (Broadmoor SC), and the ice dance team of Madison Chock (All Year FSC) and Evan Bates (Ann Arbor FSC) were crowned champions on Saturday night at the 2020 Toyota U.S. Figure Skating Championships in Greensboro, North Carolina. Both teams earned their first U.S. titles when the event was last held in Greensboro in 2015.

In the pairs competition, held at the Greensboro Coliseum Complex, the Knierims secured their third U.S. title (2018) with an overall score of 216.15, a new U.S. Championships record. They posted a free skate score of 139.09.

Skating to “Drop of Fragrance” composed by Maxim Rodriguez and “Experience” by Ludovico Einaudi, the duo overcame an early fall to achieve two Level 4 spins, a Level 4 lift and a Level 4 death spiral. They had the segment’s top program components score.

“We had a great short, and to pull out the win was special,” Chris said. “We’ve had lots of ups and downs this year, so it’s a blessing to be on top of the podium.”

“We’re just fighting for our dreams, like anybody else,” Alexa said. “Nobody sees what happens behind the scenes, that’s why we react the way we do. And that’s why all the kids out there react to a great performance the way they do, because we put so much into it that is unseen. You live for these moments, and I’m excited to claim our title, and three’s a charm.”

Training mates Jessica Calalang (DuPage FSC) and Brian Johnson (Detroit SC) earned the silver medal, posting the best free skate score of the night and a new U.S. Championships record with 146.01 points. They performed to “Your Are The Reason” by Calum Scott and Leona Lewis. Their free skate, propelled by three Level 4 lifts, helped the team to an overall score of 213.57.

Calalang and Johnson finished fourth at Skate America last October and were fifth at the 2019 U.S. Championships in their first season together.

Tarah Kayne (Broadmoor SC) and Danny O’Shea (SC of New York), the 2016 U.S. champions, claimed the bronze medal with an overall score of 204.07 points. Their free skate score of 133.72 was third best in the segment.

“It was a good night,” Chock said. “We are happy to be back in Greensboro. It was fun. We performed and that was our goal, to have a good performance and enjoy ourselves. We are so thrilled.”

2019 U.S. champions Madison Hubbell and Zachary Donohue (Lansing SC) earned the silver medal with a total score of 217.19. Their 130.88-point free dance to music from A Star is Born received Level 4 marks for five elements, including their synchronized twizzles. Hubbell and Donohue also won the title in 2018.

In just their second year at the championship-level, Christina Carreira (SC of New York) and Anthony Ponomarenko (SC of San Francisco) collected the pewter medal with 194.16 points. The 2018 U.S. junior champions scored 116.14 points for their free dance.

In the men’s competition, Nathan Chen (Salt Lake Figure Skating) has a commanding lead after the short program, setting a U.S. Championships record with 114.13 points. The three-time and reigning U.S. champion turned in a clean performance to “La Boheme” by Charles Aznavour, which included a quadruple flip and quad toe loop-triple toe loop.

“[That was] probably one of the best [short programs],” Chen said. “Everything felt calm, really paced throughout the program. I felt like I was in control of everything that I was doing, and I was happy with the program I put out. I hope that I continue that throughout the rest of the season.”

Jason Brown (Skokie Valley SC) is second with 100.99 points, a new personal best. The 2019 U.S. bronze medalist posted the top program components score, notching 48.58 points in his performance to “I Can’t Go On Without You” by Kaleo.

Andrew Torgashev (Broadmoor SC) produced a personal best score of 97.87 points and is in third place. The 18-year-old opened with a quadruple toe loop and received Level 4 marks for three elements.

Vincent Zhou (SC of San Francisco) sits in fourth place with 94.82 points. In his first competition since the U.S. International Figure Skating Classic in September, Zhou received all positive grades of execution for his elements.

The men’s free skate will take place on Sunday, Jan. 26. The 2020 Toyota U.S. Figure Skating Championships will be featured on NBC and NBCSN and is also available live and on-demand on the Figure Skating Pass on NBC Sports Gold.