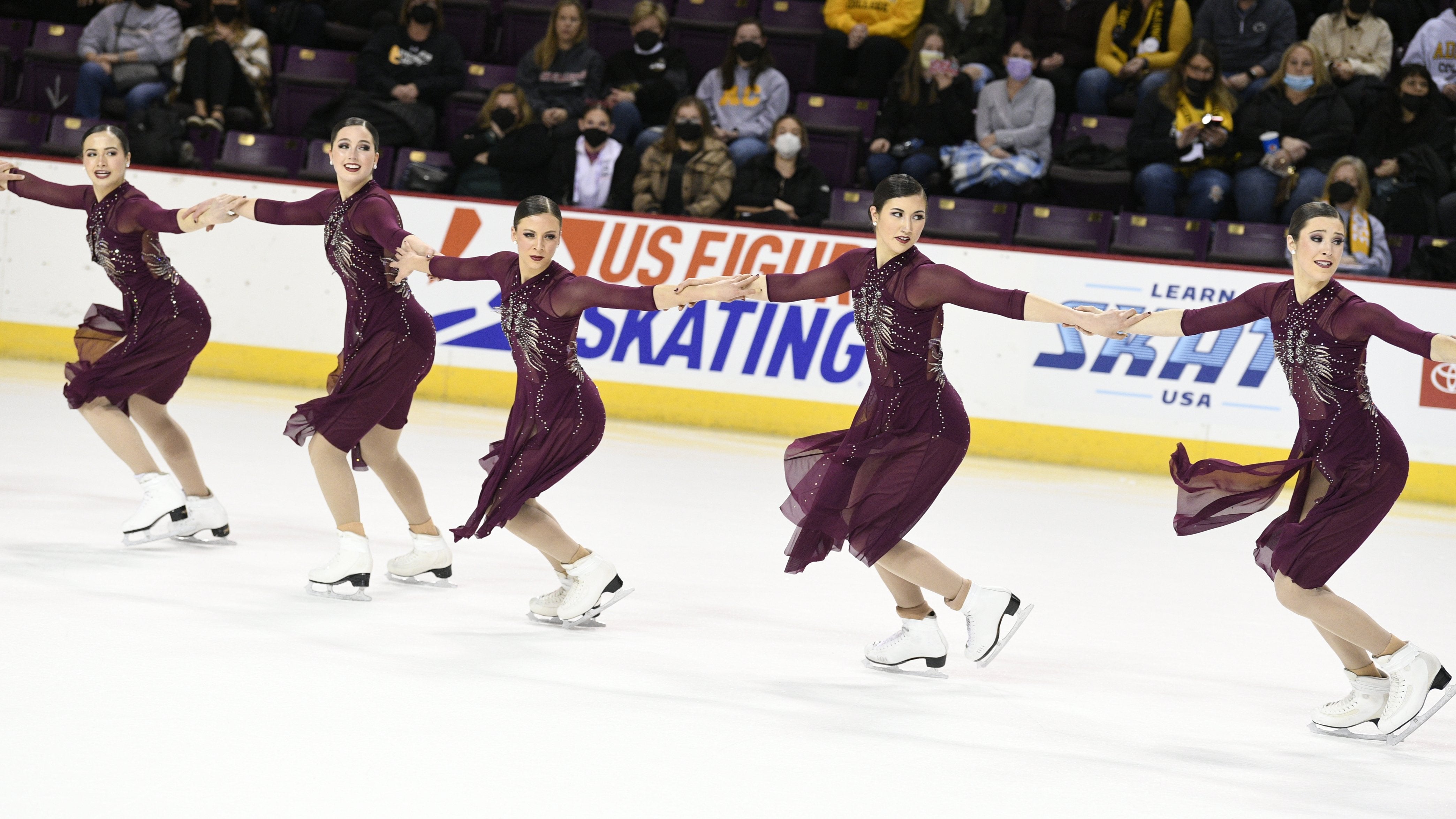 The Haydenettes (Individual Member) won their 12th consecutive U.S. title with a total score of 218.86 points. In their free skate to "Hold on to Tomorrow" by Brennan Heart, the Boston-based team earned Level 4 marks for their twizzles, group lift, move element and intersection, as well as the step sequence in their no-hold element to notch 139.73 points. Their 72.69-point program component score was the highest of the competition. The team had two falls in their creative element at the end of the program, but still finished second in the free skate.

"All we wanted to do was put out a solid performance to show off our skating skills and be calm and have a fun time, and I think we did that," said Haydenettes skater Cameron Feeley. "We did have a couple of mistakes toward the end, but that isn't something we are concerned about; we are hoping we make the World Team and peak there."

Miami University won the free skate and secured the silver medal with a total score of 214.67. Their 140.84-point "Femme Fatal" program had the highest technical score of the night with 71.17 points and included Level 4s for their no-hold and step sequence, pairs element, move element, twizzles and final intersection. This marks their best finish since 2016.

The Haydenettes and Miami University were named to the 2022 U.S. World Synchronized Skating Team and will compete in London, Ontario, April 7-9.

The Skyliners grabbed the bronze medal with a final score of 208.36 points. The Skating Club of New York squad earned 136.89 points for their stalker-themed free skate, which featured a Level 4 group lift, intersection, pair element, move element, twizzles and no-hold element. The Skyliners have placed in the top three for seven consecutive Championships and were named the first alternates to the World Team.

Adrian College finished on the U.S. podium for the first time in their program's history, claiming the pewter medal with a total score of 183.75 points. The Bulldogs finished fourth in the short program and free skate, notching 122.05 points for their "Butterfly Effect" themed free skate and six Level 4 marks. They were named the second alternates to the World Team.

Crystallettes (Dearborn FSC) placed fifth in the senior competition with a total score for 174.01 points. They earned 120.87 points for their Cruella program.

The collegiate competition broke numerous records after the top three teams finished over 100 points on Saturday night. Miami University Collegiate Varsity Team took back their crown, securing the highest score ever recorded at the collegiate level with 116.95 points. The Redhawks had previously broken the collegiate record at the Midwestern Synchronized Skating Sectional Championships with 113.70 points. Their diamonds-themed free skate featured a Level 4 intersection and traveling circle. This marks their 20th collegiate title.

"Having had a year of training a lot of skill work, a lot of strength work and putting in the hours when nobody is watching, I think they have taken the ice with so much joy and gratitude and excitement," said coach Carla DeGirolamo. "I think that is what we have had everyday at practice and this is what they do every day, which is really tremendous. They have been really consistent."

Adrian College Varsity Team earned the silver medal for the second straight Championships with 105.74 points. Their free skate set to a cover of "Bohemian Rhapsody" opened with a Level 4 move element followed by Level 4 synchronized spins. The Bulldogs were unable to compete at sectionals, but came back to competitive ice and scored a new personal best in Colorado Springs.

Earning the bronze medal, Western Michigan University also broke 100 points with their hustle-themed free skate. The Broncos received all positive grades of executive and a Level 4 synchronized spin to collect 104.30 points, a 20-point bump from their score at Midwestern Sectionals.

The University of Michigan rounded out the podium in fourth place, earning the pewter medal with 97.95 points. Their bodyguard-themed skate included four Level 4 elements.

The adult competition came down to the wire with the top three teams separated by less than one point. The Crystallettes came away with gold, collecting 64.94 points to win their fourth adult title. Out of the Dearborn Figure Skating Club, the team performed to a medley by Sia and received Level 3 marks for their move element, traveling wheel and intersection. Their technical score of 33.53 points was the highest of the night.

“They performed this program better than at sectionals,” said coach Stacy Holland. “They really worked hard to improve on a couple of elements since then — whip intersection and traveling wheel — and today they did them well, so we are happy.”

DC EDGE was right behind the Crystallettes with 64.32 points, good enough for the silver medal. The Washington Figure Skating Club team skated to an 80s workout mix which included a Level 4 intersection. The team had the highest program components of the field with 33.21 points.

Team Del Sol Adult (San Diego FSC) earned the pewter medal with 60.83 points. The Californians skated to music by Anne Lennox and received a Level 4 for their traveling circle.

Teams Elite (Individual Member) grabbed the juvenile title for the second consecutive Championships, notching 54.67 points. With this win, Teams Elite squads won gold in the juvenile, intermediate and novice competitions. Their football-themed free skate received Level 3 marks for their figure skating moves and the point of intersection in their whip intersection. They received all positive grades of execution and performed in blue football player costumes.

“We really worked as a team to prepare,” said Teams Elite skater Victoria Anguiano. “I felt really confident going into it and it felt so good to get it all onto the ice. This theme is very strong and when I skate it, I feel very strong and confident so I think it helps our skating.”

Mini Mates (Hayden Recreation Centre FSC) earned the silver medal with 52.27 points. Their “Wild West” free skate received Level 2 marks for five of six elements, and they earned Level 3s for their figure skating moves and point of intersection. The Mini Mates earned bronze in 2020 and upgrades to silver in Colorado Springs.

Narrowly behind in third place, Team Image (Individual Member) scored 52.11 to collect the bronze medal in the juvenile competition. Dressed up as firefighters, the team cracked the top-three for the first time. They also received Level 3 marks for their figure skating moves and point of intersection.

The junior, senior and collegiate competition can be streamed on-demand on Peacock Premium. The juvenile, novice, intermediate, adult and masters competition are available on Video Corner on the U.S. Figure Skating Fan Zone. Fans can get a behind-the-scenes look at the event by visiting the competition central page.