The veteran coaching team of Jenni Meno, Todd Sand and Christine Fowler-Binder enjoyed tremendous success in the 2019–20 season, with two of their pairs teams finishing with gold and silver at the 2020 U.S. Figure Skating Championships in Greensboro, North Carolina. 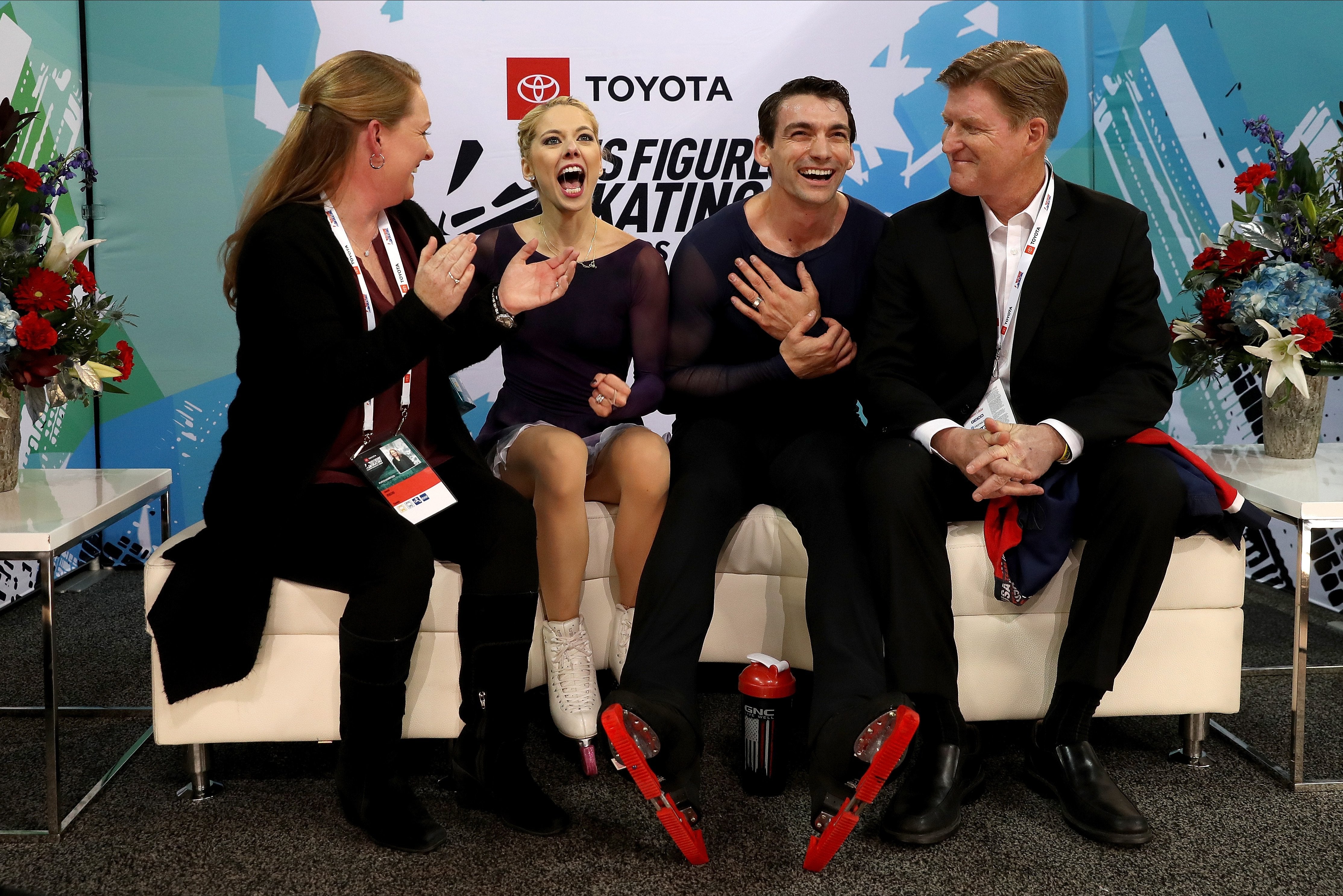 The veteran coaching team of Jenni Meno, Todd Sand and Christine Fowler-Binder enjoyed tremendous success in the 2019–20 season, with two of their pairs teams finishing with gold and silver at the 2020 U.S. Figure Skating Championships in Greensboro, North Carolina.

Alexa and Chris Knierim claimed their third title in six years, while second-year team Jessica Calalang and Brian Johnson broke through with a silver medal.

In May, the Professional Skaters Association honored the trio of coaches with its coveted PSA Coach of the Year honors.

Writer Lynn Rutherford talked to the coaching team about their working relationship and the special PSA award for a story that appears in the August-September issue of SKATING magazine.

Here is a list of the other PSA EDI Award winners for 2020:

Betty Berens Award is presented to a coach who has overcome adversity — physical or emotional — and has continued in dedication and perseverance to serve their profession with dignity and fortitude. Gloria Leous

Gustave Lussi Award is presented to a male, professional skater or coach who has brought recognition to the sport in a positive and favorable manner. Jason Brown

Sonja Henie Award is presented to a female, professional skater or coach who has brought recognition to the sport in a positive and favorable manner. Gracie Gold

Distinguished Official of the Year Award is presented to a judge or official who, through the years, has given to the sport of figure skating through dedication, reliability and integrity. Roger Glenn

Carole and David Shulman Award for Lifetime Achievement is the highest recognition bestowed by the Association to a member who has given of themselves in time, effort and dedicated service for many years to accomplish the goals of the PSA. Barb Yackel

F. Ritter Shumway Award is presented to a person in the skating world who has earned distinction for unending dedication and significant contribution to the world of figure skating. Christy Krall

Joe Serafine Volunteer of the Year Award is presented to a candidate who is recognized for outstanding service to the PSA over the past year. Cheryl Faust

Developmental Coach of the Year Award is presented to an active coach who, along with other criteria, serves as a role model, upholds professional standards and ethical behavior, cooperates with other professionals and has made a significant impact on athlete performances at the developmental levels (juvenile, intermediate, novice, junior). Laura Lipetsky

Pieter Kollen Sports Science Award is given in recognition to a figure skating coach who utilizes scientific techniques and/or equipment as an integral part of his/her coaching methods or is involved in research, publication and education in the areas of sport science and medicine as it relates to figure skating and coaching. Garrett Lucash

Paul McGrath Choreographer of the Year Award is presented to a coaching member who brings a unique choreographic combination of creativity, artistry and respect for the technical demands of the skating performance. Marie-France Dubreuil

The President’s Award of Excellence recognizes exceptional grassroots coaches, in all disciplines, for their positive contributions to the sport of figure skating. One coach from each region is selected to receive this prestigious award. The winners are:

PSA Coaches Hall of Fame Inductees:
The highest award of recognition by the PSA, the Figure Skating Coaches Hall of Fame recognizes a lifetime of accomplishment in coaching. Through the success of their athletes and/or their profound contribution to the coaching profession, these coaches have made a significant impact. The candidate must have produced the majority of their work in the United States.

Action Photo of the Year
Photos for this award are judged on the quality, drama, balance and ability to have captured the moment. Marisa Jarae