Setting the Ice on Fire

Born with a condition that limits her vision, Katie Taylor doesn't let anything stop her from feeling free on the ice. 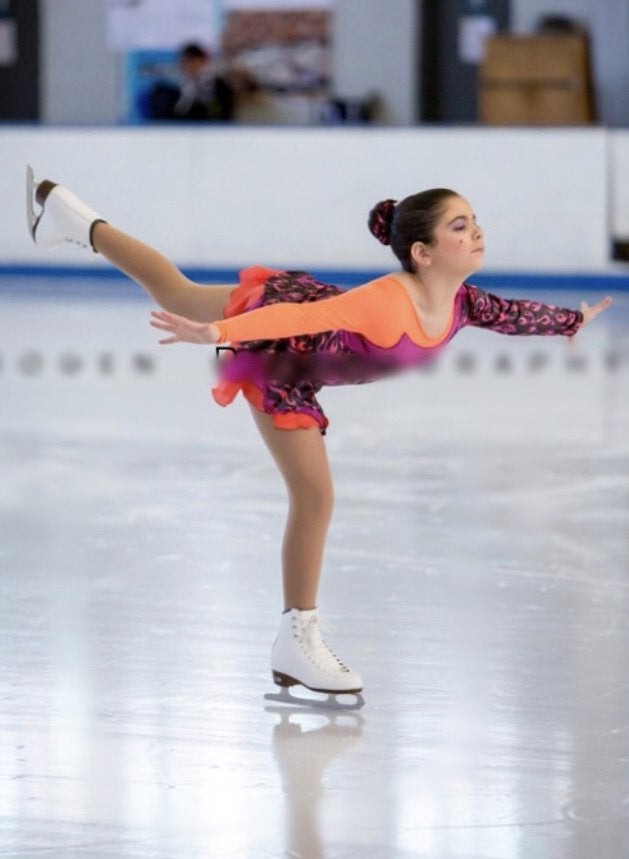 Alicia Keys’ “Girl on Fire” blared through the arena as Katie Taylor glided across the ice. Those in the audience were so focused on the girl’s flame dress and perfectly timed dance moves that they thought Taylor’s red-tinted glasses were just another part of her costume.

They had no idea that the glasses actually played a key role in allowing her to be on the ice in the first place.

When Taylor was born, she was everything that her parents, Bryan and Nicole, could have hoped for: Healthy. Strong. Beautiful. For the first six months of her life, she grew and progressed as any newborn does. Then, one day as they cradled her in their arms, Bryan and Nicole noticed that their daughter’s eyes darted back and forth in a way that was not typical.

They brought her to the doctor, who immediately scheduled a test to see if the movement was due to a brain tumor. For the young parents, the idea that their little girl might be dealing with such a serious medical prognosis was not an easy pill to swallow.

“It was scary,” Bryan said.

To their relief, the results came back negative. With the tumor eliminated as a potential cause, medical professionals— and the Taylor family— embarked on what would be a years-long endeavor to figure out what had altered Katie’s vision.

Tests revealed that she had nystagmus, an involuntary side-to-side or rhythmic motion of the eyes. The condition is rare, with only two in a thousand people receiving its diagnosis. However, as Katie got older, Nicole and Bryan suspected more was going on. Katie could see more clearly in darker environments than she could in light, and sorting objects by color proved difficult.

“We would notice that, you know, she'd be in a room playing with Legos trying to stack everything together, and it would be, you know, all dark reds, and then a couple of blues and blacks would be mixed in,” Nicole said. “And I'm like, ‘Whoa, I wonder if she's colorblind.’”

When medical professionals wrote off that possibility, Nicole and Bryan began doing research on their own. A quick search of “nystagmus and color blindness” yielded results. They believed their daughter could have achromatopsia, a condition that the American Association for Pediatric Ophthalmology and Strabismus defines as “a non-progressive and hereditary visual disorder… characterized by the absence of color vision, decreased vision, light sensitivity and nystagmus.”

They were later found to be correct, and Katie was officially diagnosed with achromatopsia at the age of 5.

To mitigate her condition, Katie began wearing red-tinted glasses to make colors that she would otherwise be unable to see more distinguishable— the same pair that would later add an extra flair to her “Girl on Fire” performance.

Katie first discovered skating at the age of 4 while on a weekend trip to Dennis, Massachusetts, with her family. They had made the outing to support her father and brother’s participation in a hockey tournament, and along the way, they made a pit stop at Tony Kent Arena. After watching others glide around the ice, she asked if she could try, too.

“She had a little red helmet on and was probably only as tall as my thigh,” he said. “I told her to march around and try to get her feet under her. She was so excited.”

Katie had tried her hand at various sports, including swimming, soccer and hockey. Though she enjoyed all of them, one thing made skating stand out above the rest.

“[I got to] be all alone,” she said. “I could just have the ice all to myself, and [I didn’t have to] think about where I should go. Because when that happens, I run into people.”

She hasn’t looked back since that afternoon in Dennis. A bout with learn to skate to gain basic on-the-ice skills was followed by private lessons, and she is now a part of the Lower Cape Figure Skating Association.

Skating brings Katie a sense of freedom. Though her limited vision means she must stay focused at all times, the ice is a place where she can relax and where the rest of the world fades away. To Bryan, that sense of comfortability is evident in her performances.

“When she gets out there on the ice, especially in a competition, she’s the only one out there,” he said. “And she’s just— she’s really, really focused and graceful.”

However, serenity is not the only gift skating has given Katie. The sport has also provided a network of others who see beyond her limitations.

“They all help each other out,” Nicole said. “Katie was helping one of her friends with one of her spins, and then her friend will help Katie go find someone [that she’s looking for] on the ice.”

Katie has experienced the same sense of openness from her various coaches. Being surrounded by such unwavering support has been invaluable as she has found her place on the ice, and she believes the world beyond the rink could learn something from her figure skating journey.

“If you’re interested in something, just do it,” she said.

The mantra sums up Katie Taylor’s career on the ice in a nutshell, and by so fearlessly embracing her passion, Katie embodies the character that Alicia Keys sang about in her hit single: a young woman whose strength and self-confidence burn so brightly within her that she leaves an indelible mark on everyone she encounters.