On “Secret Celebrity Renovation,” Nathan Chen Gives Back to Rink Where it All Began 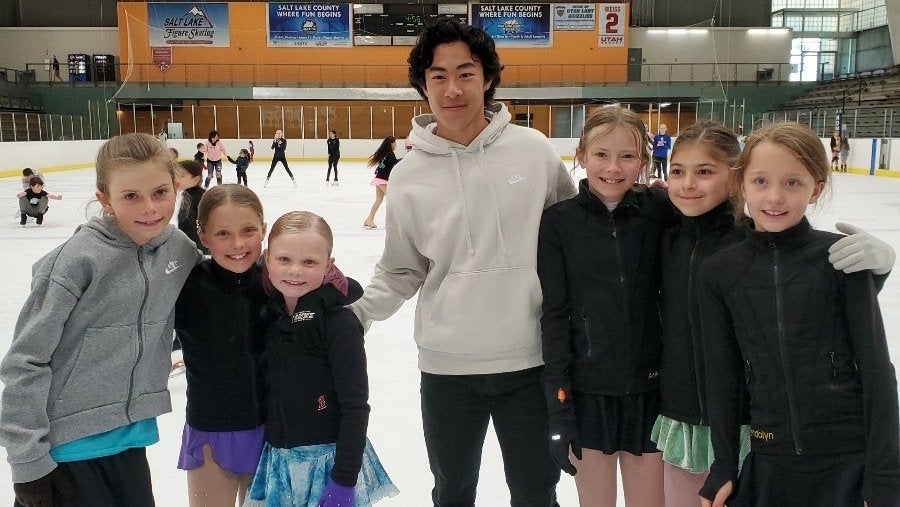 Above: Nathan Chen poses with skaters at the Salt Lake City Sports Complex during the reveal for "Secret Celebrity Renovation."

Twenty years – and three world titles, six U.S. titles and an Olympic gold medal – later, Chen still considers Salt Lake City home, and recently returned to give back to the rink that allowed his Olympic dreams to take root, participating in the latest season of the TV Show “Secret Celebrity Renovation.”

“There are so many people in my career that have helped me so much, but my first steps on the ice were at this sports complex,” said Chen in a sneak peek preview of the show released by CBS. “I was three years old. Never skated before.”

The show gives celebrities the opportunity to gift a renovation to a person who helped guide them to success. For Chen, who acknowledges the many people who have helped him along the way, that meant gifting the Salt Lake City Sports Complex a new skater’s lounge and dressing room.

“It is beautiful,” she said of the skater’s lounge. “It is just kind of a nice place to gather. Parents get to sit in there and visit with each other. It helps our community come together in a different way than when you’re sitting on the bleachers, spread apart, watching your kids skate.”

The space is immediately being put to use this weekend as the Salt Lake City Sport Complex hosts the 2022 Copper Cup, part of U.S. Figure Skating’s National Qualifying Series.

As for the dressing room, Thomson says it’s just as special.

“I walked into that room and there were some young skaters that were checking everything out, and there’s these three big mirrors along the wall,” she said. “And just watching these skaters look into the mirrors and see themselves, I wondered what was going on in their minds. I have to wonder if they looked in that mirror and saw something great.”

While this was all in the works, the rink had gotten a heads up that something was afoot and was able to clear out the necessary spaces. When the show came to do the renovations, they blocked off those areas, and Thomson said everyone was wondering what was going on.

“Then we get an announcement that there’s going to be this big celebrity reveal, come skate with Nathan Chen, and people just came to see what was happening, both from the figure skating community and the Salt Lake community and area,” Thomson said. “So that was fun, to see old friends come together, new friends, new skaters, skaters from other clubs, just all so excited to be a part of this.”

“Now there’s a plaque hanging there that these renovations were to honor them and their dedication to the sport and their inspiration that they gave to Nathan,” Thomson said. “One thing about Nathan is that he never claims to have done it all on his own. He goes out there and he skates, and it is all Nathan, but he always gives credits to those who are around him, whether they be skating friends, whether they be coaches or the skating club. Nathan always gives credit to those who helped him, and I’ve always been so impressed by that.”

Salt Lake Figure Skating puts a large emphasis on giving back, last year hosting Skate to Eliminate Cancer with Scott Hamilton. When Chen was 10, the club created a skater recognition fund to pay for tests and offer competition assistance to skaters. In order to qualify, you have to put in volunteer hours.

“We’ve been supporting Nathan through a lot of tests and a lot of competitions,” Thomson said with a laugh. “Nathan left us about six, seven years ago, but he was still a member of our club. He’s always called Salt Lake home. And his mom or his dad – usually his dad, and his sister – would always come put in those volunteer hours so Nathan could be a recipient of those funds. They never took for granted that they were part of the club, they were part of the team, and they did their service.”

Now, Chen is giving back to his skating club in a big way.

“He’s always giving,” Thomson said. “He truly is a gift to the skating community and to us here in Salt Lake City. For him to honor his coaches and his mom and the community by saying, ‘Yeah, I’d like to do something to give back to the rink where I started skating’ was just an honor.”

Although the TV show has now aired, the luster of these new renovations will last long beyond this weekend. While the Salt Lake City Sports Complex was already a wonderful place to learn how to skate, in the shadow of the Olympic legacy, Thomson is looking forward to carrying on this excitement into Learn to Skate classes in the fall.

Maybe the next Nathan Chen is already in their midst.

“The most exciting thing for us as a club is that we get to share what Nathan created,” Thomson said. “And so we will use that space to welcome guests and to celebrate the parents and the volunteers. It’ll help us make these events possible. That’s really an honor and a privilege. We’re proud to be supporters of Nathan Chen.”