Scholarships and grants pay it forward to future generations

U.S. Figure Skating's scholarships and grants were created to pay it forward to future generations of skaters. 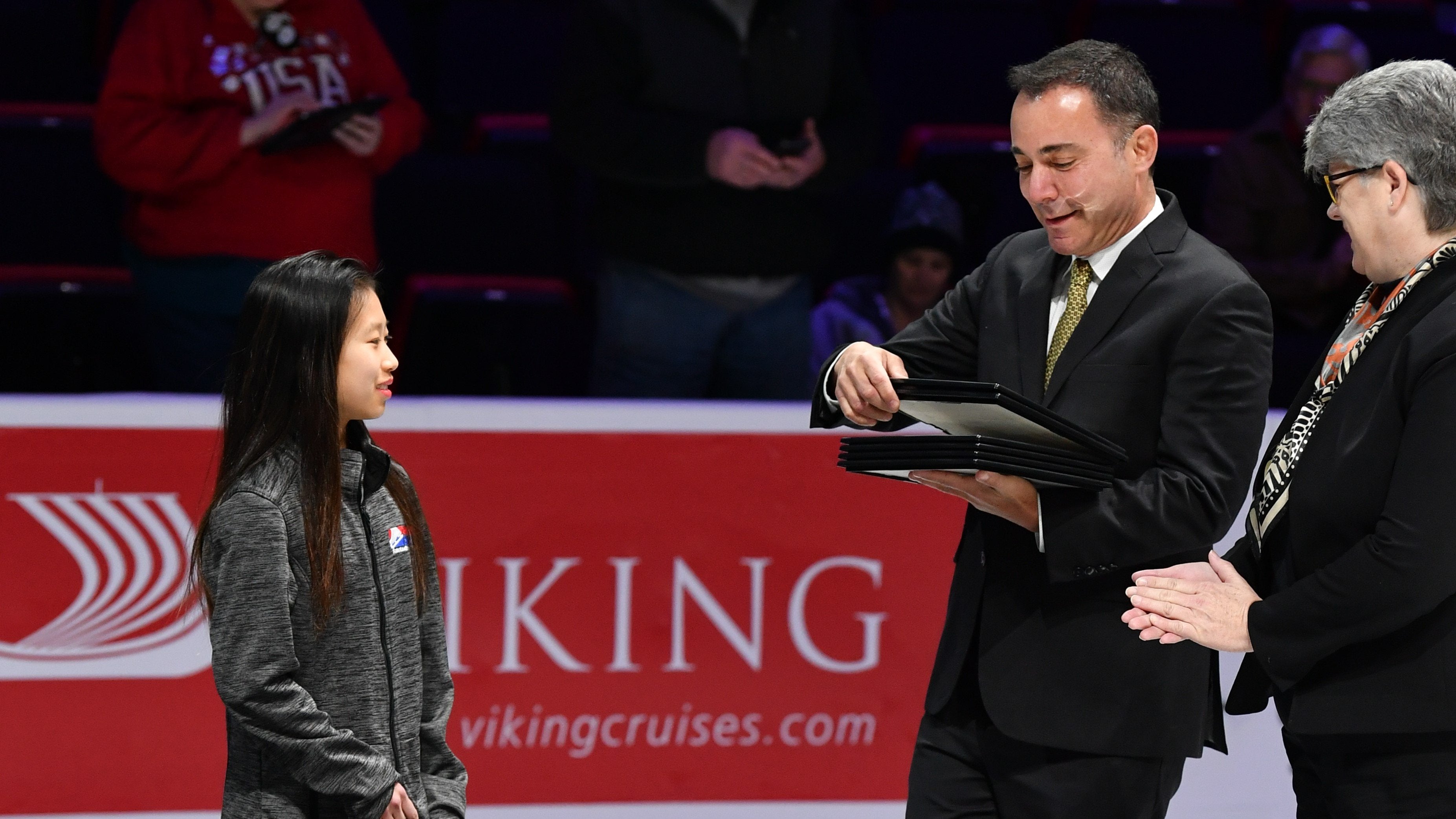 Above: Jonathan Geen presents an award for the 2019 Scholastic Honors Team.

When Barbara Buch was younger, she and her brother Peter competed in ice dance. The duo eventually reached the U.S. Figure Skating Championships® and represented Team USA at the World University Games twice.

Though she didn’t know it at the time, her parents Ilse and Frederic worked two jobs to support their skating and received financial support from U.S. Figure Skating.

“I found out much later that U.S. Figure Skating gave my parents a loan so that we could continue skating and going to school,” Barbara said. “And for a couple of years, we had some of our tuition paid by something like the Memorial Fund. So, U.S. Figure Skating supported us through our career, and I will tell you, we were not like top-five champions of the country or anything.

“My coach always told us, ‘You’ve got to have a backup plan. Go to college.’ He was one of many people who always supported our desire to continue our education, and U.S. Figure Skating did too.”

While they were still competing, Barbara and Peter discussed how fortunate they were to be receiving help and hoped to one day pass it forward.

“My brother and I had always talked about, when we got old and rich, we wanted to establish a foundation for kids who were not the most elite of athletes but still enjoyed the sport and wanted to continue competing and striving for that elite status, and still wanted to go to college, continue their education and reach academic excellence,” Barbara said. “We had talked about this for years when we were competing. We always felt like, ‘Well, somebody’s always looking out for us. We have to do this at some point later in our life.’”

When Peter passed away in 2010, followed by Frederic two years later, Barbara decided it was time to act.

Thus, the Buch Family Academic Scholarship was born. Established in 2013 in memory of Peter, Frederic and Ilse, the scholarship is based on athletic and academic achievements and financial need. It recognizes active amateur skaters who pursue excellence in both their academic and athletic pursuits.

“My parents benefitted, and I hope that others can benefit from continuing their education and continuing the sport that they love, because both of those are pretty expensive, and not everybody has a sponsor,” Barbara said. “I just sort of wanted to do something to acknowledge that and give back to others who could benefit the way that I benefited from being in the sport and having somebody support me and help my parents out.”

Another such offering is the Joyce Komperda Athlete Support Fund, which intends to provide financial assistance for intermediate, novice and junior-level athletes who demonstrate financial need.

Komperda began skating at 8 years old to help with her asthma symptoms. After 10 years as a skater, she went on to become a judge and next year will celebrate her 50th year doing so.

“It was part of my life for so many years, and still is, and I just think there’s so many people that could use a little bit of help reaching their goals,” Komperda said.

Komperda will occasionally see the recipients of her fund skating, and she says it’s endlessly rewarding to know that she had a hand in helping them.

“It just makes me feel good when I see somebody out there who’s competing, and that’s a person I’ve maybe helped a little bit with the money that’s been given to them, and just see that they’ve come a long way,” Komperda said. “It's a pleasure for me to just enjoy their skating.

“Some of them have had hard lives, and they have done a lot to improve themselves. Every one of them has been special.”

While Komperda chooses recipients based on financial need and hardships skaters have overcome, she continues to be impressed with what the applicants have accomplished outside of skating.

“They’re so much involved with other things, either musicians or artists, or just involved in totally other things besides skating,” Komperda said, “which is nice to see because you’re seeing a well-rounded person being developed.”

One of the oldest and most prestigious financial awards is the Scholastic Honors Team, which recognizes 10 high school-age U.S. Figure Skating members each year who have distinguished themselves in figure skating, high school academics and community involvement.

“I think one of the things that is most impressive about these skaters, these scholar-athletes, is what they contribute to their communities,” Geen said. “We have Scholastic Honors Team members who have created their own 501(c)(3) charities for so many different things: for the elderly, for music, for disadvantaged kids. And not all of them, obviously, have formed their own charities, but several have, and even the ones who haven’t are very involved in their communities and community activities.”

The Scholastic Honors Team was formed in 1996 to reward students balancing figure skating training and high-school accomplishments. Such elite-level skaters as Sarah and Emily Hughes and Jason Brown have been recognized, but any high school student competing at least at the novice level is eligible.

“Some of them are not known. Some of them have never been to the U.S. Championships. Some of them have never been to sectionals,” Geen said. “But because they’re competing at the novice level and above at least at regionals, they have the same balancing in terms of training and school and their extracurriculars. So, I think it certainly is important and wonderful to reward the world-level, internationally ranked skaters, but I think it’s equally important to recognize these scholar-athletes that wouldn’t be recognized but for the Scholastic Honors Team.”

While financial awards are available based on a wide variety of accomplishments and criteria, the people behind them say that it all comes back to one thing: helping those that have come after them.

“Every kid that goes into some sport wants to be at the Olympics,” Barbara said. “It’s not realistic for a lot of people, and we were so happy to get to U.S. Championships and be able to compete at that level, and then be able to be representing the U.S. at the World University Games. It’s the most unbelievable feeling. We just sort of said, ‘You know, somebody else should feel that.’ And so this is a means to the end.

“You have to have a little bit of talent, but it sure helps to have somebody looking out for you and supporting you, and I think that’s basically what’s behind this, is just helping somebody else.”