Park City Skater Looks Back on One Amazing Year

Chloe Taurel reminisces on a positive experience at the Excel Final and National Solo Dance Series. 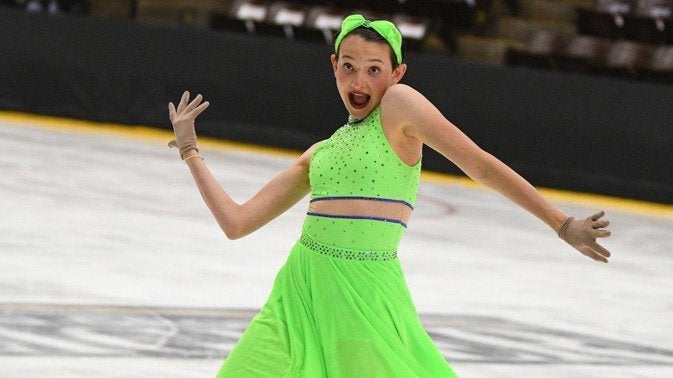 Above: Photo by KR Photogs Photography

“At our club, she inspires many of our younger athletes to compete in more disciplines,” Roberts said. “She is a superstar in our club’s eyes.”

For the Park City, Utah, teen, the past season was incredible, a bit “crazy,” but filled with special memories on and off the ice.

The Excel Final proved fun as Taurel could be competitive in freestyle for the first time in years.

“It was also a blast to be with people who still loved to skate but wanted to do it for themselves instead of just [wanting] to land triples,” Taurel said.

“I made friends at every competition I went to,” Taurel said. “Then we all reunited in Santa Clarita (California). It felt more like a celebration than a competition because everyone cheered each other on and worked hard to show what they could do at the final competition. For many of us, it was our last for the foreseeable competition as most of us are seniors in high school.”

As she looks back, the young woman who enthusiastically embraces all her disciplines surprisingly didn’t always embrace figure skating.

“I started in first grade and honestly hated it,” Taurel said. “It also didn’t help that my best friend at the time broke her arm skating with me that same year. But my mom signed me up again in second grade, and I absolutely loved it. My coach that year, Tiffany McNeil, has been my freestyle coach. I loved the friends I made, the games we’d play on the ice and the feeling of improving.”

In fact, the most significant motivational factor for Taurel is to continually improve.

“There’s nothing in the world that beats getting off the ice feeling good,” Taurel said. “ So my goal is always that feeling. While our sport is meant to be objective, I’ve learned that it is still subjective and that sometimes I need to trust that gut feeling over what the score or placement says and to remember how much I’ve improved.”

She also credits her many coaches at the Figure Skating Club of Park City, who helped her succeed in multiple disciplines.

“I’ve been working with Tiffany McNeil the longest,” Taurel said. “She’s gotten me from dips to double Axels and seen me grow as a person. Erika Roberts put me on my first moves test, my gold moves test and every one in between. She’s not only like a mom to me, but she helps me improve my skating skills every day. She’s the one who encouraged me to branch out and try solo dance, leading me to Chris Obzansky, the dance coach at our rink.”

Obzansky pushed her out of her comfort zone and to be better every day. Club coaches Katie Tucker, Kylee Richards and Stephanie Bass also lend a hand.

“Every single one helps me improve a different aspect of my skating, and I love working with all of them,” Taurel said.

It is also worth mentioning that Taurel achieved all this after being born with club feet.

“I was in casts and braces from the time I was born, had my first surgery at two weeks, and my last at 5 years,” Taurel said. “I started skating a year later.”

This one-of-a-kind athlete also serves as an inspiration for the younger club skaters.

Now in her final year at Park City, Taurel hopes to continue skating while in college and be involved in the sport for many years.

“I hope the younger skaters remember that skating is about more than the score; it’s the friends, the communities and the lessons you learn. Don’t forget that, above all else, skating is supposed to be fun.”

And she is still waking up at 4:30 a.m. for early practices.

“I love stepping on the ice every day,” Taurel said. “I love feeling invincible because I feel more comfortable on a 1/8-inch blade than my feet on the ground. I love being outside and gliding on scratchy ice and spinning in circles. I love trying new things, laughing with friends, meeting competitors and traveling to cities I never thought I would visit.”