The Origins of Get Up - Celebrating the Fifth Anniversary

“We all fall. It’s how we get up that matters.”

Those 10 words serve as a mantra for athletes of all levels, across all sports.

They are also at the core of U.S. Figure Skating’s Get Up campaign. 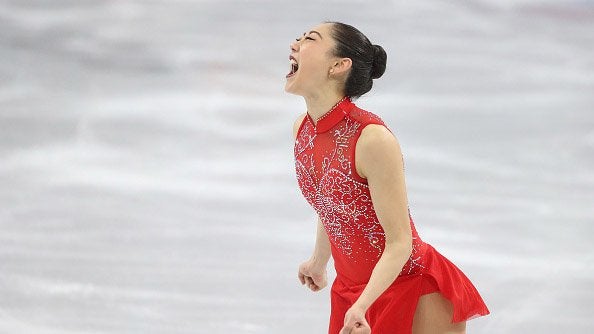 “We all fall. It’s how we get up that matters.”

Those 10 words serve as a mantra for athletes of all levels, across all sports.

They are also at the core of U.S. Figure Skating’s Get Up campaign.

Launched in the fall of 2016, Get Up is an initiative aimed at increasing the number of people engaged with figure skating while changing their view of the sport. The two simple words apply to all human beings – whether it be in triumphing after a setback or fighting for what one believes in – but they are also intrinsic to figure skating in a literal sense. One of the first lessons in Learn to Skate USA is getting back up after falling down on the ice.

When U.S. Figure Skating set out in 2014 to devise a campaign that would reposition the sport, it enlisted the help of external marketing agencies as well as those within the sport: athletes both elite and grass root, parents, officials and others.

“There kept on being this underlying theme of resilience and this idea of the first lesson that you learn in the sport of figure skating is how to get back up again,” U.S. Figure Skating’s Chief Marketing Officer Ramsey Baker said. “There was that aspect that the agency really grabbed on to and when they presented us with this idea of ‘Get Up’ and creating a ‘Get Up’ movement.”

Coincidentally, “Get Up” was a term Baker and his colleagues had been wanting to put to use for a few years. It arose from the 2011 film RISE, which U.S. Figure Skating commissioned. On the 50th anniversary of one of the sport’s greatest tragedies, RISE told the story of the plane crash that took the lives of the entire 1961 U.S. World Figure Skating Team.

It was the ultimate Get Up moment, with the sport being forced to rebuild domestically and rise from literal ashes.

“When we did that film, there’s a part where Scott Hamilton is talking and he just poignantly looks into the camera and says the words, ‘Get up,’” Baker explained. “He’s talking about times being tough and when you’re hit with something like this, you have no choice but to get up.”

U.S. Figure Skating held on to the idea, contemplating whether to put it on merchandise, until it returned as if by fate.

“It was just this moment of, this is it, this is the right thing to do because everything seemed to be aligning and everyone seemed to be coming back to this same route that’s inherent in this sport of this Get Up spirit. That’s where the Get Up campaign was forged, and then we moved forward with building it out.”

WeGetUp.com was launched, which at the time featured films created by British director Rob Chiu, featuring U.S. Figure Skating members discovered in a nationwide search, as well as interviews with Team USA skaters, inspirational Get Up stories and a celebration of organizations making a positive impact in their communities.

Scott Hamilton was the initial Get Up ambassador, helping to launch the program on the TODAY Show.

The 1984 Olympic champion has defined the term since birth. He was given up as an infant and adopted. At age 2, he was told he had a disease that would cause him to stop growing. As an adult, Hamilton faced testicular cancer, as well as three brain tumors over the course of 12 years. He has continued to get up, and also to give back.

“He truly embodies it,” Baker said. “Everything about him from when he started in skating and no one thought he was going to do anything in the sport, to reaching the pinnacle, to the multiple bouts of cancer. His willingness to continually give, give, give when so many other people probably would’ve said, OK, enough already, I’m going to go tuck myself away and be alone. …

“To me he epitomizes not only what Get Up means, but his willingness to give in support of the campaign and share his story, and listen to others who share their story with him, that probably is what means the most to me from the Get Up campaign.”

Another memorable Get Up moment for Baker came during the men’s short program at the Olympic Winter Games Sochi 2014, just months before the campaign was devised.

On his opening jump, Jeremy Abbott fell hard on the ice, crashing into the boards. He lay still for a matter of seconds, clutching his ribcage. Instead of staying down any longer, Abbott got up – literally – and continued his program.

“As much of a disappointment as this is, I’m not ashamed,” Abbott told reporters after his performance. “I’m not in the least bit ashamed. I stood up, and I finished that program. And I’m proud of my effort, and I’m proud of what I did under the circumstances.”

“That was something that maybe five years before even, we wouldn’t have tried to talk about it much,” Baker said. “It would’ve been that was the moment where he had this unfortunate fall and lost his chance at medaling. No, it became this moment of him showing what figure skaters are all about.”

The Get Up campaign, which, one year in, was organically rebranded We Get Up after the realization that it was a more collective movement for society as a whole, gave skaters permission to talk about and celebrate their failures. It was revolutionary in a sport where perfection is rewarded and a look of flawlessness is sought after.

Baker has seen thousands post their own Get Up stories, which can be done on social media using the hashtag #WeGetUp, including other national governing bodies and their athletes.

“It’s been great to watch because I think it’s something where those who perform at a high level in whatever their sport might be all go through the same thing, and it’s been interesting to watch them have an outlet to talk about some of those things that they’ve dealt with,” Baker said.

Guaranteed Rate is the presenting sponsor of the fifth annual National Get Up Day, which will include the inaugural Get Up Virtual 5K. Participants can register online through Feb. 26. They will receive a printable bib – with the number 1961 to commemorate the World Team 60 years later – and have the opportunity to skate, run, bike, walk, roll or complete the 5K distance any way they choose through the end of February.

Get Up was initially slated to last a year and a half, culminating with the Olympic Winter Games PyeongChang 2018, where the sport would have its greatest audience. Additional initiatives, such as National Get Up Day, have ensured the campaign – and movement behind it – is truly never-ending.

U.S. Figure Skating encourages members to nominate themselves or their peers as Get Up Champions annually. All nominees are recognized in SKATING magazine, and select nominees are chosen as Get Up Ambassadors. The ambassadors, which in 2020 included 2014 Olympian Gracie Gold, post about the Get Up spirit on their own social media and are featured more extensively in SKATING magazine.

Since the launch of the campaign, Get Up moments have continued to be take place on the sport’s largest stage.

Nathan Chen entered the 2018 Olympic Winter Games as a medal favorite. During his short program, Chen fell on the opening jump, stepped out of another and put both hands down on a third. He was 17th. Instead of giving up, Chen put out the highest-scoring (and record-setting) free skate the following day and rose to fifth. He has continued to “get up” from a performance he called “disastrous” and has won all 13 individual competitions he has entered since.

Ice dancers Madison Chock and Evan Bates had also hoped for a medal in PyeongChang, but those dreams were dashed when Chock aggravated an ankle injury while warming up for the short dance. Then during the free dance both skaters fell entering a spin. They finished ninth. Chock had surgery that spring and they continued to rebuild. Chock and Bates earned the titles of U.S. champions and Four Continents champions in 2020.

The PyeongChang Games also saw athletes get up from hardships other than falls. Adam Rippon made the Olympic Team on his third attempt – and a year after suffering a shoulder injury, while Mirai Nagasu made the team after missing out on the 2014 Olympic Team. She then became the first U.S. woman to land a triple Axel in Olympic competition.

According to Baker, “Even though the official campaign itself only went for about a year and a half, there have been a number of legacy components of the campaign that will continue forever because it’s truly built into who we are and it’s in the DNA of the sport.”