Michelle Kwan: From the Podium to Politics

The last time Michelle Kwan stared into competitive skating’s glaring spotlight was among the hardest times of her athletic career.

Seated alone at an elevated press conference table, Kwan’s glorious career — unknowingly to her — would soon come to an end.

Calm and subdued, the most-decorated athlete in U.S. Figure Skating history faced a throng of international journalists to discuss her injury and decision to withdraw from the 2006 Olympic Winter Games in Turin, Italy. 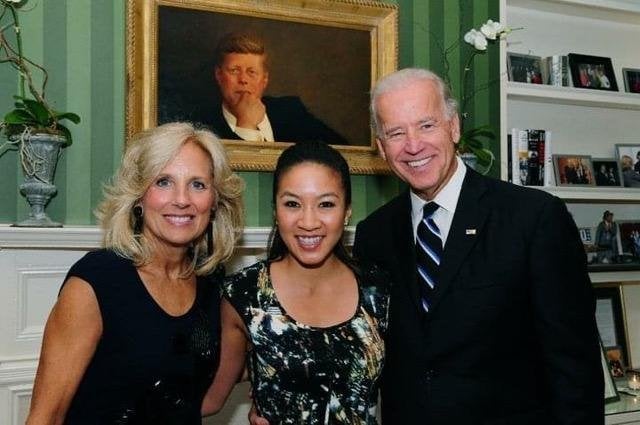 During U.S. Figure Skating’s Centennial Celebration, we look back at some of the sport’s most-impactful athletes and catch up with what they are doing now.

The last time Michelle Kwan stared into competitive skating’s glaring spotlight was among the hardest times of her athletic career.

Seated alone at an elevated press conference table, Kwan’s glorious career — unknowingly to her — would soon come to an end.

Calm and subdued, the most-decorated athlete in U.S. Figure Skating history faced a throng of international journalists to discuss her injury and decision to withdraw from the 2006 Olympic Winter Games in Turin, Italy.

“It was the one of the most difficult things I’d ever gone through up to that moment,” Kwan, now 40, said remembering the scene some 15 years ago. “Looking back, it was a blur: the trip to Italy, the judges coming to my training facility [to audit competition readiness], the press conference …”

After spending much of the past decade on the East Coast working for two U.S. presidential campaigns, Kwan is comfortably back in her native Los Angeles. She’s happy to wake up each morning in her longtime home with beloved dog Ginseng and enjoys living within driving distance of her parents (Estella and Danny Kwan), siblings (Ron and Karen Kwan), teen nieces (Olivia and Sophia) and her baby nephews (Cade and Jake).

California’s sunshine and laid-back vibe present a stark contrast from Kwan’s hectic life on the campaign trail. After working as a surrogate outreach coordinator on Hillary Clinton's unsuccessful 2016 presidential campaign, Kwan spent the past two years as the director of surrogates for President Joe Biden’s campaign, engaging and coordinating high-profile supporters.

The path from international skating star and cultural icon to Washington insider was as choreographed as her 1998 Rachmaninoff program.

“After those 2006 Olympics, if I had been 22, then maybe I would have tried to make it to 2010,” Kwan said. “But I was 26 and I had other interests, like going back to school and pursuing a master’s degree in foreign policy. I had many chapters of my life ahead of me and it felt like it was time to turn the page.”

Still on crutches after her Olympic-induced hip surgery, Kwan enrolled at the University of Denver, her first in-person school since middle school. She graduated in 2009 from DU’s prestigious Josef Korbel School of International Studies with a bachelor’s degree in international studies and a minor in political science.

While in college, DU alumna and then-Secretary of State Condoleezza Rice appointed Kwan as the first U.S. Public Diplomacy Envoy, which sent her across the world to engage in a cross-cultural dialogue with international youth.

“The gained experience through international cultural exchange and civic participation really opened up my views of the world,” Kwan said. “I discovered that diplomacy — finding common ground, helping people and countries come together — was a real interest for me. And it makes sense, because where does the world come together every two years? Where do 200 countries come together at one time? The Olympics! In many ways, my Olympic and athletic background prepared me in my role as a diplomat.”

In the midst of her worldwide travels, Kwan was accepted to the graduate international affairs program at Tufts University. While a graduate student, she was asked by Secretary of State Clinton to continue her role with the Department of State.

After earning her master’s degree in law and diplomacy in 2011, she moved to Washington, D.C., to pursue a new career path. Kwan’s first job was at the Department of State, serving as a senior advisor for the Bureau of Educational and Cultural Affairs. In this capacity, she helped broaden the scope of the department’s public diplomacy with strategies to reach larger segments of the world's population.

“It was exciting to be in a position to develop innovative policy for public engagement to enhance public affairs on key priorities across the department,” Kwan said.

Kwan also served as an advisor to Secretary Clinton’s U.S.-China Women’s Leadership Exchange and Dialogue, which focused on strengthening ties between the two countries in the areas of women’s issues, including education, culture, sports, and science and technology. Inspired by Clinton’s leadership, Kwan later joined her presidential campaign.

“I had the opportunity to work with her firsthand and wanted to jump in on the campaign trail to help get the first female president elected,” Kwan said. “During her announcement speech, she said the reason she was running for president was because she envisioned an America where a father can tell his daughter, ‘Yes, you can be anything you want to be. Even president of the United States.’ I found that very powerful.”

After the surprise of Clinton’s defeat, Kwan returned to her other interests, including the Special Olympics International, which supports people with intellectual disabilities. Calling the organization “near and dear to my heart,” Kwan has served on its board of directors since 2010 and is its current treasurer.

Meanwhile, she kept one foot in politics, working with the Democratic Congressional Campaign Committee in support of campaigns across the country.

In March 2019, when Kwan was in Abu Dhabi for the Special Olympics World Games, she received a call asking her to be director of surrogates for Biden’s campaign, which officially launched April 15, 2019.

“There were so many candidates [for the Democratic nomination] with great platforms,” she said. “But I believed the vice president was the candidate who had the experience and biggest opportunity to win.”

“My dad said, ‘Will you stop working already?’” she said. “But I’m always looking for my next obstacle and ready to take on any challenge.”

Early in the campaign, Biden’s staff size was just 10 percent of Clinton’s well-oiled machine. But Kwan was excited to be on board, spending the first few months traveling to campaign stops in the four early primary states.

“The last time I was on an airplane was in March [2020],” she said. “I was scheduled to go to Seattle, but they had the early outbreak, so I redirected to Boise. That’s it. My last flight since the pandemic”

Kwan moved back to Los Angeles, and, like many across the world, worked from home.

“Working on a presidential campaign you keep a very crazy and hectic schedule,” she said. “I started each day at 6 a.m. [Pacific Time] on a call with our department and my emails wouldn’t stop until about 11 p.m. —and that’s 2 a.m. on the East Coast where most of my colleagues lived.”

After nearly two years working on the campaign, Kwan’s final task was as a senior advisor for talent on the Presidential Inauguration Committee. Among those she recruited to take part in the festivities were superstar athletes Nathan Chen (figure skating), Allyson Felix (track) and Elena Delle Donne (basketball).

“It was the best feeling to be able to include fellow Olympic athletes into the Inaugural festivities,” she said. “It felt like my two world’s colliding!

“It was exciting to help put the Inauguration together, but it was really a bummer that I couldn’t attend in person. I was really looking forward to finally getting the opportunity to wear a gown and experience my first inauguration after so much hard work on the campaign trail.”

With the inauguration complete, Kwan again has time to breathe.

Now, instead of deploying high-profile people to speak at campaign rallies, she drives to her parents’ house to take a stroll in the park with her mom and her dog Penny, and of course, Ginseng. She even recently brought her brother’s favorite apple pie to his birthday celebration. And sometimes, Kwan drops in on her family’s East West Ice Palace in Artesia, California, occasionally lacing up her skates and staying grateful.

“Skating laid the foundation for my life and I am thankful for it teaching me so much. I am a better person because of the sport,” she said. “When I look back at my athletic career and the opportunities provided by skating, it’s a blessing. It wasn’t about medals. It’s all the things I learned through sports. Even as a 5-year-old, when I first took the ice, I learned about persistence.”

It’s that persistence that will continue to drive the fierce competitor who won two Olympic medals, five World titles and nine U.S. Championships.
Which begs the question: Are politics in Michelle Kwan’s future?

What about a run for office?

“I would never say never, but I don’t see it in the near future,” she said. “But then again, it depends what month you catch me in.”