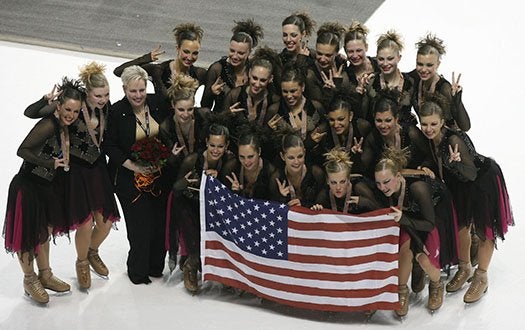 That’s partially because it was the first medal achieved— and 14 years later, remains the highest placement earned — by a U.S. team at the World Synchronized Skating Championships.

But the program itself is also memorable because the team was, well, magic, according to now head coach Carla DeGirolamo.

“This particular team had a lot of grit,” DeGirolamo recalled of her fourth season as an assistant coach. “There were a lot of strong personalities, which didn’t make every practice easy, but they were extremely fierce and willing to do whatever it took to achieve their goals.”

While the balance of talent and determination was seemingly perfect, the athletes and coaching staff had a lot of work to do throughout the 2006-07 season before becoming World silver medalists. They had won the U.S. Synchronized Skating Championships the year prior, but the idea of the World medal for Team USA loomed in the back of their minds.

Considering how quickly the sport was evolving in the mid-2000s, skaters needed resilience to keep up with the demands of increasingly difficult rule changes. In the 2005-06, the International Judging System (IJS) was introduced to synchronized skating before the World Championships, so Team USA was constantly adjusting to “hit a moving target,” according to DeGirolamo.

“Technical strategies and styles were completely different year to year,” DeGirolamo explained. “In 2006, every element from wheels and circles featured step sequences.”

In the early 2000s, the Haydenettes and Miami University typically represented Team USA in the international event — but had never reached the podium. The RedHawks nabbed seventh place in 2005, then fourth at the 2006 World Championships.

“By creating a new kind of student-athlete experience, my mom attracted talent and competitive skaters,” Vicki’s daughter, Ashley Korn, explained. “She also thought of herself as the CEO of the team, so she hired the right staff to put the best product out there.”

And that staff consisted of choreographers and coaches from different disciplines and countries, all there to mold the RedHawk’s signature style.

As an alumna, DeGirolamo was her right-hand visionary.

“Our coaching methods were complimentary because of our emphasis on instruction, meaning our athletes should understand the techniques well enough to physically execute and verbally explain the elements and skills,” DeGirolamo said. “And being in a university environment, the skaters were naturally inquisitive.”

Another strength for the RedHawks that season was their earned confidence and experience from seasons past.

“We had been building momentum for a while leading up to 2007,” DeGirolamo said. “Especially after the team didn’t qualify in 2004. After that, we had a fire to climb up the ranks and gain placements at the World Championships.”

One of first stops that season was in Torino, Italy, for the FISU World University Games. The team stayed in the Olympic Village and competed in the venues used for the Olympic Winter Games Torino 2006. While the RedHawks had not yet reached their peak, DeGirolamo said she could feel all 16 skaters hitting their stride.

“I think we finished fourth out of five teams,” she said. “But it was an incredible experience —  partially because of the atmosphere, but primarily because we could tell the girls loved the programs. That energy never waned throughout the season.”

The momentum carried the girls through 2007 U.S. Synchronized Skating Championships in Colorado Springs, Colorado. As the reigning champs, all eyes were set on the RedHawks to reclaim their title.

But — they fell short of gold, less than two points behind the Haydenettes.

“I’ll never forget walking into that locker room and telling them they finished second at the [U.S. Championships],” DeGirolamo said. “We huddled together and told them, ‘You can let this defeat us and take away all of the great work we’ve done, or we can use the disappointment as fuel to do what no one else has ever done before.’”

So, the team focused inward and “stayed in their bubble” until they had another chance to test their potential. This time, their opportunity was on the world stage.

When the athletes arrived and began practicing in London, Ontario, Canada, Korn and DeGirolamo noticed more and more spectators trickled into the arena for glimpses at the RedHawks. It was like the fans caught on that this team had a shot, as DeGirolamo describes.

The crowd’s enthusiasm only grew from there. During the short program, the arena was “electric.”

“Competitions in North America are already special for Team USA,” DeGirolamo said. “The fans were so loud and so jam packed, that we could barely hear the announcers while our skaters took the ice for the warm-up block.”

After a clean skate, Miami University sat in third after the short program — meaning their goal of capturing a medal from the World Championships was in reach. For the first time in program and Team USA history, they attended the small awards ceremony and a press conference. Then, it was time to refocus on the free skate.

“As a coach, sometimes it’s more nerve wracking to be on the sidelines than it is on the ice,” DeGirolamo said. “But that weekend was different. I just felt excited.”

And she thinks the girls felt ready, too.

As for head coach Korn, Ashley — who was a current skater on Miami University’s collegiate team — remembers watching her mom from the stands as the RedHawks took the ice and throughout the performance. They were the last team to skate in the event, and the arena had gone from boisterous cheers to a familiar eerie silence before their music began.

Then, the first few notes of electric guitar strummed over the speakers, and their “Black Magic” program began.

Side-by-side lifts opened the free skate, while accompanying skaters gained speed with crossovers around the edges of the rink. The shape-centric program effortlessly transitioned from block step sequence to a classic line element, which featured twizzles, choreographed strumming motions and, briefly, a fall.

But the mistake did not phase the team — the 16 athletes realigned and set up a triangular intersection to a circle, with an accented movement on every crescendo in the music.

It seemed coach Korn also remained calm, proudly watching her athletes execute every element, just as they had trained it.

“As I was watching her, she had her hands behind her back and was bending her knees, moving along with the team with a smile on her face,” Ashley said. “Seeing her so relaxed and at peace — I knew they were going to do it. I knew she was finally going to get the opportunity to show the world what she had built all of these years.”

Gaining momentum throughout, the rest of the program contained cartwheels, spread eagles and strongly executed traveling elements. To close, an energetic, flawless no hold.

“It wasn’t a perfect skate, but when they got off the ice they were laughing, crying and just relieved because they knew they had left it all on the ice,” DeGirolamo said.

Then it was time for the scores. When the numbers finally flashed onto the screen — an accumulative 198.71 points — DeGirolamo said the skaters’ mouths dropped in disbelief.

“I’ll never forget that moment because the whole season we knew this team was something special,” she said. “But the feeling of accomplishing our mission to make history was indescribable.”

Miami University was bringing home Team USA’s first medal from the World Synchronized Skating Championships — and it was a silver.

The team finished behind Sweden’s Team Surprise, who earned a total of 222.24 points. The RedHawks had edged out Nexxice in the free skate, leaving the Canadian team in third with 194.08 points. The Haydenettes finished fourth with 193.36.

Since 2007, the Haydenettes have brought home five more World Championship medals for Team USA — but Miami University’s silver-medal finish has yet to be topped.

Editor’s note: Vicki Korn passed away on April 9, 2020. She will always be remembered for her work at Miami University, and the strides she made in synchronized and collegiate skating.