A Memorial Fund Tribute: We must never forget

On this day, Feb. 15, 1961, the greatest tragedy in figure skating history happened. Today, we remember the crash of Sabena Flight 548 carrying the 1961 U.S. World Team. From this great tragedy arose the living legacy that is the U.S. Figure Skating Memorial Fund. 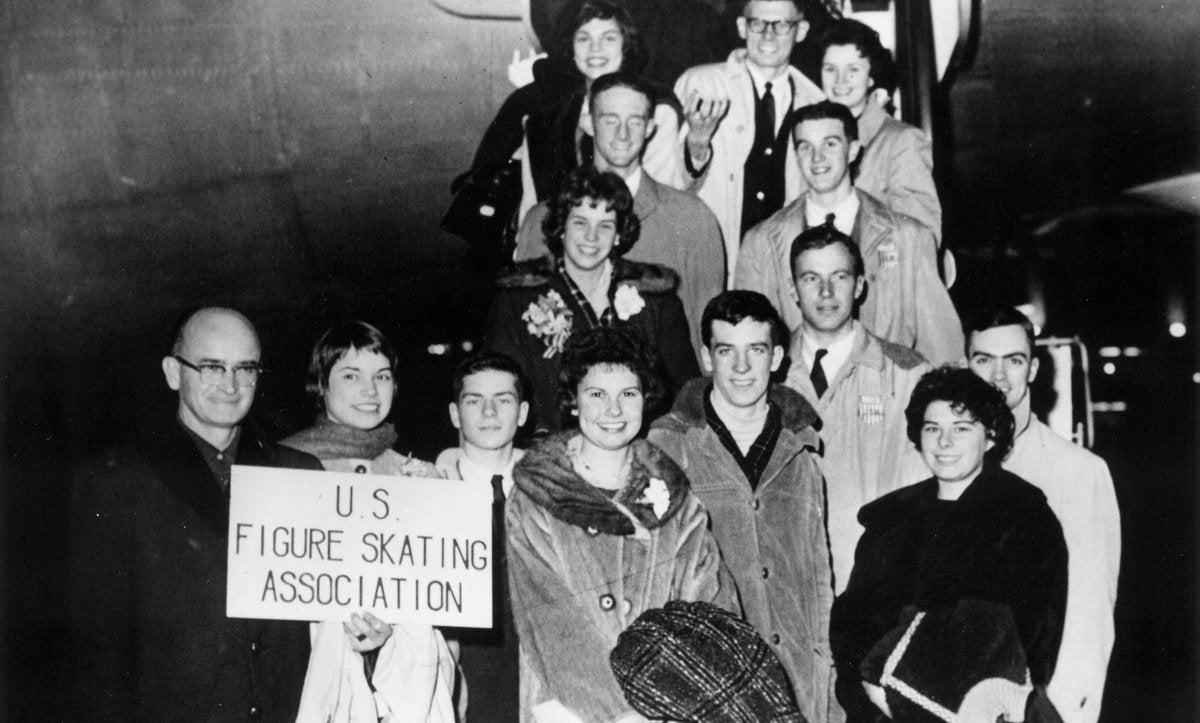 Editor’s note: Gary Clark was a close friend and training partner to many on the 1961 U.S. World Team, which perished in a plane crash en route to the competition in Prague. This is the first column in a series written by those who personally knew the World Team members and experienced the aftermath of this tragedy.

On Wednesday, Feb. 15, 1961, I was in a church on the Michigan State University campus with my high school chorus practicing Brahms’ Requiem for a performance the following weekend.

I had just gotten home from the North American Figure Skating Championships in Philadelphia the night before. My parents had let me go to watch my friends on our U.S. team compete, especially Gregory Kelly, Bradley Lord and my best friend in skating, Douglas Ramsay. We all skated, lived and trained in East Lansing and had become fast friends.

Many of us had stayed up all night going room to room to visit old and new friends at the Treadway Inn where we all stayed. Later that day, I waved a tired “goodbye and good luck” as I got into a car and headed back home to East Lansing.

Our U.S. team got on a chartered bus from Philadelphia to New York’s Idlewild airport, where they subsequently boarded Sabena Flight 548 for Prague, Czechoslovakia, and the 1961 World Championships.

We were singing in the chapel with the light coming in through the stained-glass windows behind us, making patterns of light on the floor. Suddenly, one of the boys behind me tapped me on the shoulder and whispered in my ear, “Did you hear about the plane crash where all the skaters were killed?” My classmates often teased me for being a figure skater, but I thought to myself that that was the meanest thing yet.

“I turned and said, “That is just not funny!” He repiled, “I’m not kidding. It was on the news this morning.”

As soon as the music stopped, I went to the nearest pay phone and called my father at work. “Can this be true?” I asked.

He replied, “Yes, but I was not going to tell you until after school.”

Then I saw a newspaper lying on a table near the phone. The opening lines read: “Today, February 15, 1961, a plane carrying 72 people, including the entire 18-member United States World Figure Skating Team, some of their coaches, and some of their family members traveling to the World Championships in Prague, were killed instantly in Belgium in the fiery crash of Sabena Flight 548.” I thought of Jean Ramsay and of the other families. Then I thought of my skating partner, Joey (Joanne)Heckert, who was in algebra class. I went outside and sat under a tree and cried.

This started a long series of funerals, memorial services and crying alone and with friends. One of those friends was Bruce Heiss, who had almost been on the World Team. Bruce served with me as a pallbearer at Doug’s funeral. We spoke many times about Sundays at my partner Joey’s house where we enjoyed delicious dinners cooked by her mother Verna (the Big “V”). We remembered the singing and piano playing, croquet, and canoeing in the Red Cedar River behind their house. These were crazy, fun times at the skaters’ dormitory. Our personal and skating relationships, which were now severed, would last our lifetimes.

The story of the crash was world news and it was kept alive in the media for weeks, so you could not escape the tragedy. Yet those skaters and coaches who were left, some in the junior and some in the senior ranks, began to realize the meaning of the loss beyond our personal sorrows. We started to rise up to try to fill the void that now existed in skating in the United States. I will always remember the heroism of Barbara Roles, who had retired the year before the crash, had a child and then returned to training after the tragedy to try to help our team earn (World) places for the U.S. the following year.

When I returned to training, I skated in the same arena where my lost friends’ skates had made their marks on the ice. I was certain their spirits were there encouraging us. I can still see Doug smiling at me across the ice. “Fall down? Then get up!” he would say, smile and skate off to do a double Axel with his hands in his pockets. Doug and the others on that plane became my inspiration and my skating partner Joey’s as well. As we stood on the podium after making the World Team in pairs (1965), we said a special thank-you to our lost friends, knowing they had inspired our efforts and success.

The loss of those I knew in 1961 has affected my adult life in many ways. I feel a special bond with others in the skating world who share my experience. I hold my friends a little closer, and I am made stronger as an adult by remembering the power and spirit of our sport’s rebirth.

I have told a part of my own story related to this tragedy, as others will, in subsequent issues of SKATING magazine. In this way, those of us who are old enough to remember the people who were killed in the plane that crashed that day in 1961 will pass on our memories to a younger generation of skaters, parents and coaches. Although we have risen above the tragedy of 1961, our stories and our gifts assure that we will never forget our history.

More information about each of our 1961 World Team members, their coaches and family members can be found in Patricia Shelley Bushman’s book Indelible Tracings.

One way we can always remember and respect those whose lives were lost on that tragic day in 1961 is by supporting our current skaters with donations to the Memorial Fund. Gifts to the Memorial Fund provide skating and academic scholarships to athletes who have demonstrated excellent competitive potential and/or academic achievement.