The kickoff event of the 27th International Skating Union Grand Prix of Figure Skating Series will take place for the third consecutive year just off the glitzy Las Vegas Strip at the Orleans Arena. 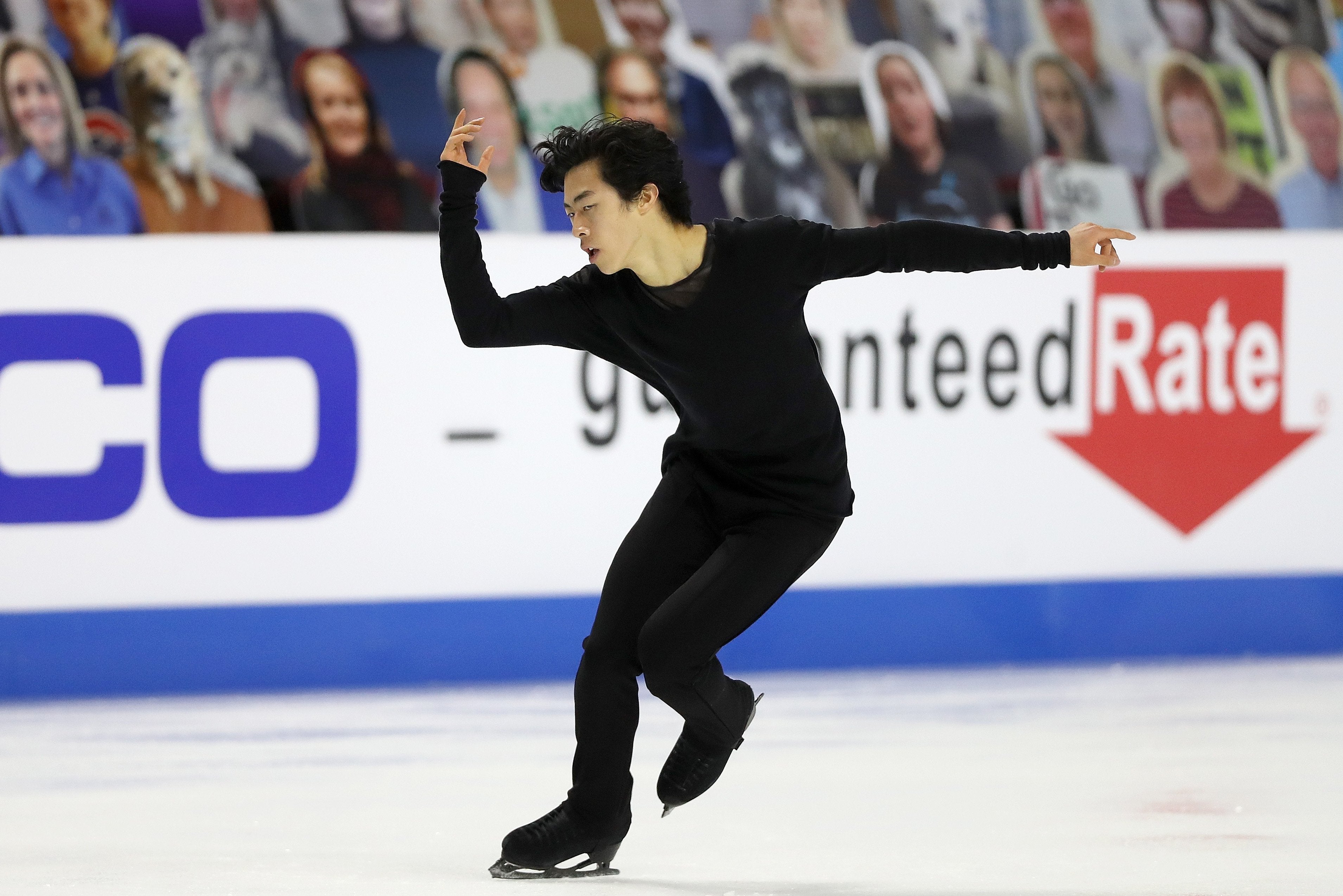 For the first time, all the gold and silver medalists from the previous U.S. Figure Skating Championships will compete at the new season’s Skate America®.

The kickoff event of the 27th International Skating Union Grand Prix of Figure Skating Series will take place for the third consecutive year just off the glitzy Las Vegas Strip at the Orleans Arena.

After competing there without fans and international competition in 2020 due to the pandemic, the top skaters in the country are primed to show off their programs and hopefully engage with the fans this weekend, pending the local health department guidelines.

“We both missed all the fans and the support they give every time we step on the ice,” Brian Johnson, U.S. pairs silver medalist with Jessica Calalang, said. “We’re excited as well to see familiar faces and reconnect with everyone.”

Adding to the excitement and drama of this first major competition of the Olympic season is an all-star cast of international skaters, including some of the best skaters from the powerhouse countries of Russia and Japan.

“I always say that my biggest competition is myself, but of course, I love having the opportunity to compete against the world’s best, especially in America,” U.S. women’s champion Bradie Tennell said. “I’m friends now with a few of the Japanese girls, so it’s always fun to see them at competitions. I think it’s great for the fans to see that level of skating, because I feel there are a lot more competitions in Europe, so Skate America® gives the American fans the chance to see their favorite skaters up close.”

It was 2017 Skate America in Lake Placid, New York, where Tennell enjoyed her breakthrough competition, surprising everyone by earning the bronze medal before going on to capture the U.S. title and qualify for the 2018 Olympic Winter Games.

This year marks the fifth consecutive time for the two-time and reigning U.S. champion from Carpentersville, Illinois, to compete at Skate America®.

“Every time I go back [to Skate America®] I just remember how it felt like being there for the first time,” Tennell said. “It brings back a little bit of that childhood wonder, almost, when I step on the ice.”

Tennell, 23, arrives in Las Vegas as a medal favorite and with expectations of returning to the Olympic Winter Games in Beijing in February.

“I want to go out there and enjoy every second,” Tennell, who trains in Colorado Springs, Colorado, under coach Tom Zakrajsek, said. “I want to put my programs [choreographed by Benoit Richaud] out there for the world to see. These programs are special to me; I love them so much.

“My short program is not what people are expecting. My free program is not even in the ballpark of what my short is like. I’m excited about that contrast this year, showing my range of styles.”

Team USA’s Amber Glenn will look to build upon her momentum from last season, in which she earned a career-best silver medal at her fifth senior-level U.S. Championships. The Texas native, who turns 22 a few days after Skate America®, includes a triple Axel in her short program and returns to her free skate program to “Rain in Your Black Eyes.”

Audrey Shin, 17, won a skate-off at Champs Camp in late August to secure a berth at Skate America®. Shin, who trains in Colorado Springs, Colorado, captured the bronze medal at 2020 Skate America and was seventh at the 2021 U.S. Championships. She brings back her short program to “The Giving.”

Chen, 22, will look to become the first skater to win five consecutive Skate America® titles. Todd Eldredge of the U.S. won five, but not in a row, in the 1990s.

The three-time World and Grand Prix Final champion, Chen enters this Olympic season having won every competition since finishing fifth at the 2018 Olympic Winter Games.

For the Olympic season, Chen has once again teamed up with renowned choreographer Shae-Lynn Bourne.

“We tried to do styles that I was comfortable with, yet somewhat different,” Chen said. “The short program [“Eternity” and ”Nemesis” by Benjamin Clementine] is almost a re-creation of a piece that I’ve done in the past, and the free program [a Mozart medley] is again almost a similar style that I’ve done in the past, with a slightly modern twist.”

Vincent Zhou, the reigning U.S. and Skate America® silver medalist, kicked off the season at 2021 Cranberry Cup International, where he dominated the mostly domestic competition. His personal international record-breaking short program (102.53) featured an opening quad Lutz-triple toe loop followed by a quad Salchow. His free skate was also superior, with four consecutive quads landed at the start of the program.

Zhou, who trains in Colorado Springs, is bringing back his short program from last year, to “Vincent (Starry Starry Night)” and his free skate from the 2018–19 season, music from Crouching Tiger, Hidden Dragon.

“The short program is a comfortable and special program for me because it was my own music choice and it’s a program that highlights my strengths very well, which is my ability to emote and feel the music in a more internal way,” Zhou, who turns 21 the day after Skate America®, said. “We are working on bringing it out and bringing up my projection and my presentation.

“My free skate is also a special program to me and it’s a fan favorite; it’s the one I won my World bronze medal in 2019 to, plus it’s culturally appropriate for the setting of the Olympics and for me, too. When I first returned to this program, I just felt like stepping into a real good pair of old shoes, right away.”

If he can stay healthy and his equipment holds up, Zhou said he could make a serious run at qualifying for the Grand Prix Final, as well as accomplishing a goal of breaking 300 points internationally.

The top international challengers for a medal include Japan’s Shoma Uno, who won the silver medal at the 2018 Olympics and was fourth at the 2021 World Championships. Michal Brezina of the Czech Republic returns for the fifth time to Skate America®, where he won the gold medal in 2011 and the silver medal in 2018. He’s a three-time Olympian.

While U.S. champions Alexa Knierim and Brandon Frazier are looking to get off to a quality start this Olympic season at Skate America®, they are more excited about returning to the city and venue — Las Vegas and Orleans Arena — where their new partnership enjoyed its first taste of success.

It was at 2020 Skate America where the two veteran skaters debuted together at an in-person competition. They won the event, setting the stage for their victory at the 2021 U.S. Championships in the same city and venue.

“For us there’s more excitement to return to a familiar place where we have good memories and attribute that to the start of the Olympic season, more than put pressure on this specific event that is initiating our Olympic trial body of work,” Knierim said.

Sporting two new programs, Knierim and Frazier opened this season with a second-place finish at the 2021 Cranberry Cup International in Norwood, Massachusetts, finishing behind the veteran Russian team of Evgenia Tarasova and Vladimir Morozov.

Knierim and Frazier will be joined at Skate America by their Irvine, California, rinkmates Jessica Calalang and Brian Johnson, and new team Chelsea Liu and Danny O’Shea.

“We are thrilled to show off our new short program, choreographed by Benoit Richaud,” Johnson said. “It’s a different style than our previous programs, but we love the choreography and the music, and we hope the audience enjoys it as much as we do.”

Calalang and Johnson, the reigning U.S. silver medalists, placed third at the Cranberry Cup, while Liu and O’Shea finished fifth.

“Starting the competitive season somewhere familiar is a big advantage,” Hubbell said. “And going in as reigning national champions is always a great feeling. I remember being a kid, looking up at the posters of Meryl [Davis] and Charlie [White] on all the promo stuff, so it’s definitely a cool feeling to have your face up there promoting the event.”

On their heels are compatriots Madison Chock and Evan Bates, who will vie for their third consecutive Olympic berth. Despite equal longevity to Hubbell and Donohue (both teams formed their partnerships in spring 2011), Chock and Bates will compete at Skate America® for only the third time.

“Skate America® is a special event to us and one we haven’t participated in for six years,” Bates said. “We always get excited to skate in our home country because we get to see many familiar faces, and the opportunity to skate close to home doesn’t come too often.”

Both training under the direction of Marie-France Dubreuil, Patrice Lauzon and Romain Haguenauer at the Ice Academy of Montreal, the top two U.S. teams will face off with an impressive 19 U.S., five World and 26 Grand Prix Series medals between them.

Rounding out the U.S. contingent are Molly Cesanek and Yehor Yehorov, who will make their international Grand Prix Series debut after finishing fifth at last year’s domestically run event. They also finished fifth at the 2021 U.S. Championships in Las Vegas.

“Being there a second time feels familiar, and we are happy to be returning to perform there, as we love Orleans Arena and are extremely excited to perform for an audience there in person for the first time,” Yehorov said.

Hubbell and Donohue are motivated, they said, to face such a strong field in such a pivotal season.

“It’s something we’re not used to,” Hubbell said. “We’re used to going to Skate America® and not having our rivals in Madi (Chock) and Evan (Bates) there with us. But we know that, especially this season, there are no easy competitions. There are no guaranteed wins by any means. And so while there’s that big gulp when you see the list and you’re like, ‘Oh wow, we’re starting with a tough competition!’ I think it’s a really motivating thing for Zach and I. Our team really rises to the occasion when it’s needed.”

Mimi McKinnis contributed to this story.