Naomi Lang, the five-time U.S. ice dance champion and 2002 Olympian, was the first Native American woman to compete at the Olympic Winter Games. Since the death of her father nearly two years ago, she says she has been moved to further explore her heritage as an enrolled member of the Karuk Tribe. 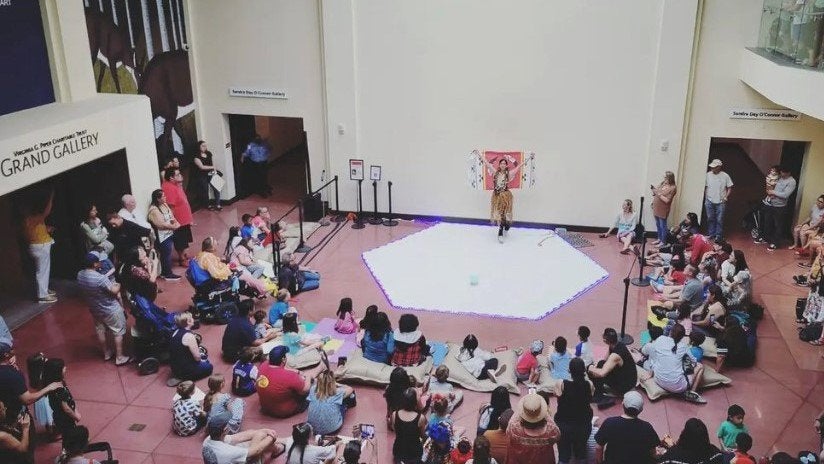 Above: At another event, Lang wears traditional Native American dress as she talks to local youth.

Naomi Lang, the five-time U.S. ice dance champion and 2002 Olympian, was the first Native American woman to compete at the Olympic Winter Games. Since the death of her father nearly two years ago, she says she has been moved to further explore her heritage as an enrolled member of the Karuk Tribe.

“My parents divorced when I was 3,” Lang said. “My mother did her best to teach me about my heritage and took me to powwows growing up. After my father passed, I had to find out everything about him. I met the whole Lang side of my family, whom I hadn’t seen since I was a baby. My uncle is one of five people who can speak the Karuk language.”

The Karuk Tribe lives on their own ancestral land – not a reservation – in northern California near the Oregon border. Lang is now taking Karuk language classes twice a week and learning Karuk traditions like braiding bear grass, basket weaving and collecting acorns to make flour.

“It’s been a cool, awesome journey and I’m discovering a whole new world I never knew before,” Lang said.

As she embraced her background, Lang found herself wanting to bring figure skating to young Native Americans in the region.

“I’m trying to find ways to get skating into the native culture,” she said. “As I’ve been visiting my home more often, and seeing how people on reservations live, I realized there’s no way to get kids to an ice rink. But if you can’t ice skate, you can roller skate!”

Before she became a figure skater, Lang was a roller skater. With her uncle Julian Lang, she helped the Northern California Indian Development Council organize a roller skating event for Hoopa, Yurok and Karuk youth on March 12 in Eureka, California. The event included inspirational speeches.

“We started off with a welcoming prayer, somebody spoke in Yurok, my uncle Julian sang in the Karuk language, and then I spoke for about 45 minutes,” Lang said. “I told my life story from the beginning, how much I loved skating, and all my trials and troubles. I didn’t sugarcoat anything, I was really honest. By the end, my uncle was crying.”

After lunch, about 50 of the young people in attendance tried roller skating, led by three roller derby skaters.

“Everybody had an absolute blast,” Lang said. “There were a lot of falls, but they were giggling and laughing. I haven’t roller skated since I was probably 10, so I was right there with them. I got to meet all the kids and they asked me questions, and there was a raffle. One little boy won a pair of roller skates, and he was so excited.”

Since the event, Lang has been thinking about ways to get roller skates into the hands and onto the feet of more Native American children. She hopes to come up with a plan soon, and she hasn’t given up on the idea of introducing Native American youths to ice skating.

“I’ve been meeting with the head of the diversity committee at U.S. Figure Skating,” she said. “We’re trying to put together a figure skating event at Snoopy’s Home Ice in Santa Rosa for Indian youth. I’d love to get something started where I could get used figure skates and get them to the kids in northern California. I’m very passionate about helping the youth there. They struggle.”

Lang is the ice dance director at Ice Den Chandler in Arizona, a full-time coach as well as a mom of five. Her children range in ages from 3 to 17; only one, 5-year-old Elora, seems interested in figure skating.

“She may be my skater,” Lang said. “I’m waiting to see if she really likes it.”