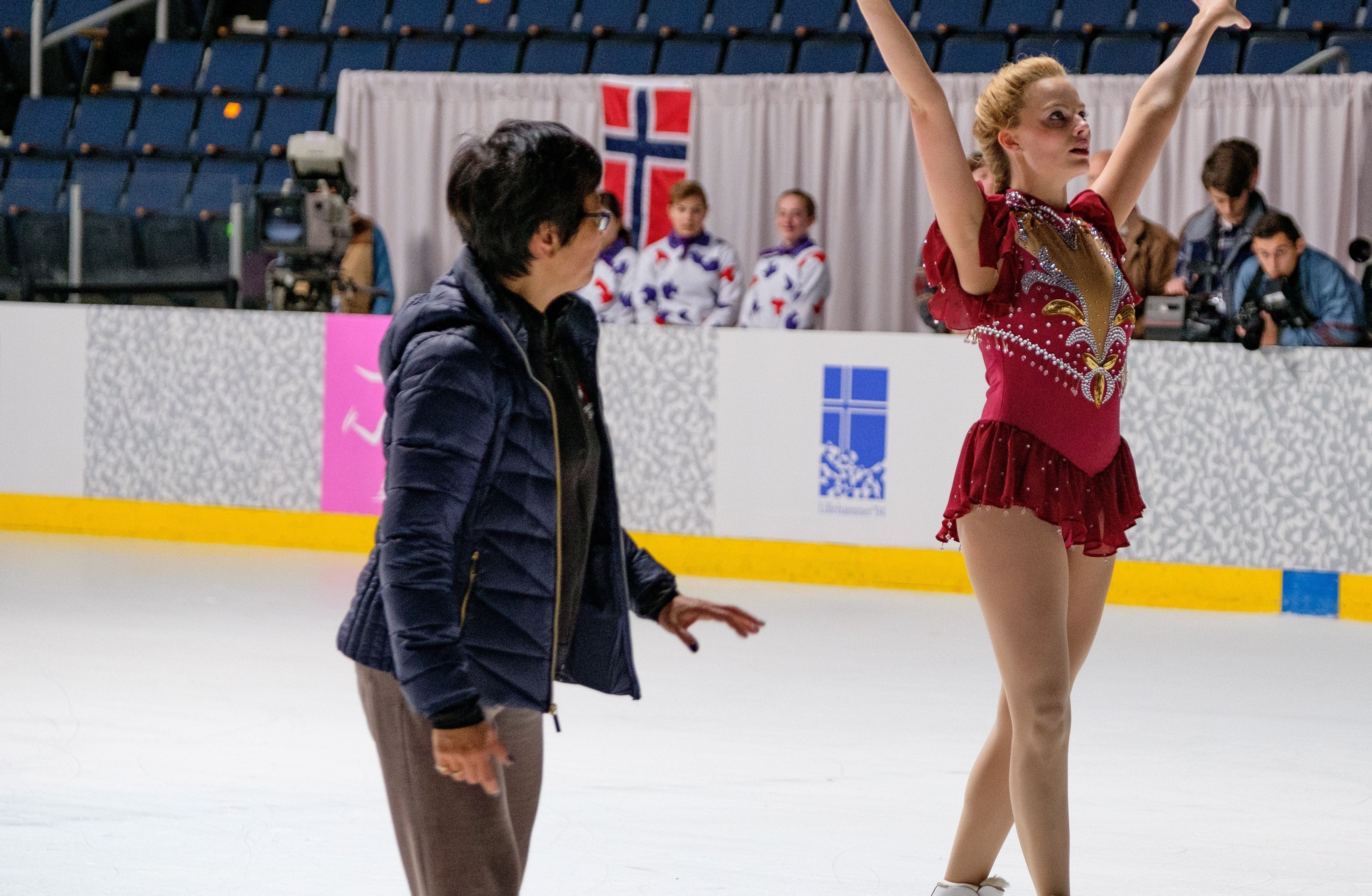 Above: Margot Robbie and Sarah Kawahara work on the set of I, Tonya.

Early in March 2020, renowned choreographer Sarah Kawahara was working on a new show for Royal Caribbean Cruise Lines and Willy Bietak Productions. She was about to start choreography preparation, prior to the arrival of the cast. But on March 9, Bietak called to tell her the show had been canceled.

That was the week when everything shut down because of the coronavirus pandemic, and cruise ships were obviously no exception.

“There’s a lot to putting together a show,” Kawahara told SKATING magazine. “We were about two weeks out from going into rehearsals in San Bernardino, California. It was cast, costumes were designed. I had just finished editing all the pieces with our music conductor, Kevin Nadeau.”

Kawahara said that she was following the growing news story about the virus, and had already ordered some masks.

“I had this inkling,” she said. “We kept forging ahead with our pre-production so we could be ready. We didn’t want to believe that the whole thing was going to shut down.”

Once the world came to a stop, Kawahara and her husband relaxed and took time to smell the flowers – literally. They live in the Los Angeles area, about an hour and a half from Santa Barbara.

“We’re fortunate that we live where we live because there’s a lot of natural beauty around us,” she said. “The poppies were in bloom in Lancaster and we went out to see them several times. 360 degrees around you, there’s this amazing landscape of nature and color. We would also go to the ocean once a week with our dog.”

Kawahara’s husband Jamie Alcroft had a heart and liver transplant three years ago, putting him in the high-risk category for COVID-19. This meant that visits with their granddaughter, who is almost 2, had to stop for the time being. Kawahara took the time off to pursue some other arts, apart from choreography.

“My work has always been my escape,” she said. “Not having it, I got back into painting. I love working with color and texture, and there’s a lot of movement with watercolor.”

When she joined the Ice Capades at the age of 17, Kawahara’s plans to go to college and study art were put on hold for her entire adult life.

“My affinity for art went on the back burner,” she said. “But over the years I’ve gotten to see a lot of wonderful art. I studied with [coach] Osborne Colson and he really brought me up with that understanding of how the arts are all related.”

As a child, Kawahara also played classical piano, and she has returned to that, too.

“I’ve been playing Beethoven and Mozart. My main piece is a Beethoven Rondo opus 51, no. 1. It’s really fun to play, it’s really intricate. Beethoven was a real showman. It’s interesting to revisit it now.”

As a break from classical music, Kawahara is also learning music from video games. She was inspired to check it out after attending a “Kingdom Hearts” live concert.

“It was fascinating. It’s hard to learn because it’s so syncopated and sweeping. But, by golly, I’m getting it.”

Kawahara’s son, Thatcher, is a video game designer, and her daughter Alysse is focusing on being a mom for now. Her other daughter, Hayley Kiyoko, is probably even more famous than her mother. A Disney child star on many projects including The Wizards of Waverly Place and Scooby-Doo!, she is now an award-winning pop star and LGBT activist.

“She writes her own music, she’s a producer, she has a new album coming out in the spring, and she just released a perfume called Hue,” Kawahara said.

Kawahara has been choreographing and directing shows for cruise ships for more than 20 years. The job usually involves a lot of travel, at least three or four trips a year to the Mediterranean, Asia and the Caribbean, and a lot of preparation.

“I design in my head, in advance,” she said. “Once I get all the design aspects in place, the set design from the art director and the costume designs and the music edited, then I begin my preparation with the actual choreography. I go through the music with a fine-tooth comb and lay out the choreography in advance. When it comes to a solo, I work with the skater one-on-one and collaborate with them as to what works best for them, as well as pushing the envelope for what I can do with them.

“We prepare a new show in California, then we go overseas to where the ship is being built, then break in the show and tech the show, which takes about four weeks. Then it goes on its initial cruises, and you stay for a couple of cruises and see how it’s working. Then I leave and a performance director stays with the show.”

Each show is designed for a specific ship and stays with the ship. New casts come in every six months.

“I’m very proud to say the shows have a wonderful life because when you infuse new talent constantly it’s like a new show every time,” Kawahara said.

Prior to her work with cruise ships, Kawahara had a long, distinguished career packed with accolades. She worked with most of the big-name skaters of the 1980s and 1990s, notably Scott Hamilton and Peggy Fleming. She won two Emmy awards, for the CBS show “Scott Hamilton: Upside Down” and for the 2002 Olympic opening ceremonies. She worked on the films Blades of Glory and I, Tonya, and the Netflix series Spinning Out. She is a member of the World Figure Skating Hall of Fame as well as those of Canada, the U.S. and the PSA.

Just prior to this interview, the massage parlor shootings in Atlanta had just happened and it was hard to ignore the tide of racist speech and violent acts against people of Asian descent.

“It just doesn’t make sense. Like so many injustices in the world, it just doesn’t make sense. My dad’s father was in an internment camp in British Columbia during World War II. My father was a student at the University of British Columbia and he got kicked out of university at the start of the war. That was wartime, but the pandemic has been like wartime. It’s historical.”