Judges give their take on pride in skating

Judges Shawn Rettstatt and Jaclyn Ward Helms are proud to be voices in skating for the LGBTQ+ community and are ready to provide a supportive voice for current skaters who may be thinking about coming out publicly. 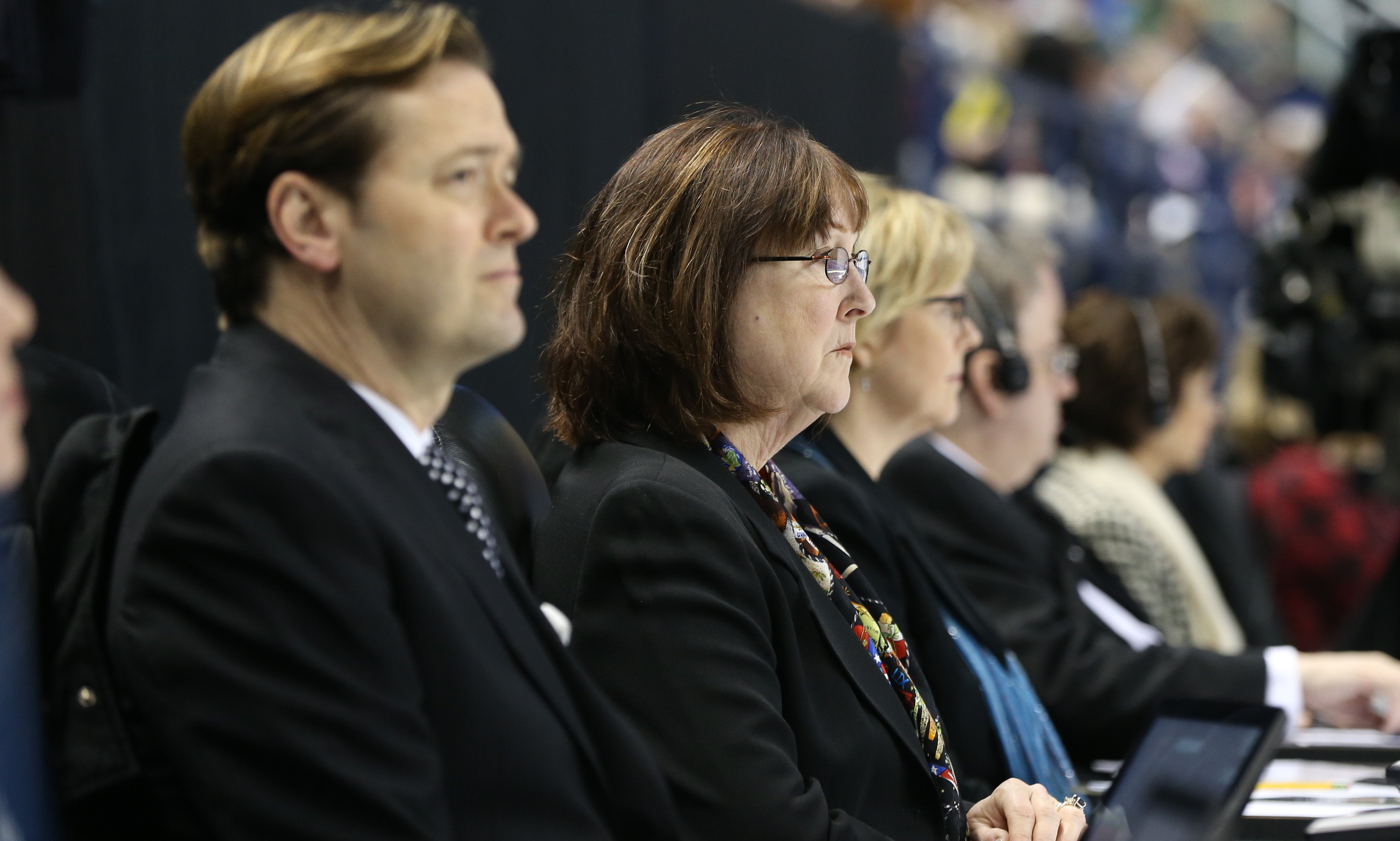 Above: Rettstatt calls the action at the U.S. Championships.

Judges Shawn Rettstatt and Jaclyn Ward Helms are proud to be voices in skating for the LGBTQ+ community and are ready to provide a supportive voice for current skaters who may be thinking about coming out publicly.

“I’ve just always been me,” said Rettstatt, an Olympic-level ice dance judge and member of the ISU’s ice dance technical committee. “If someone did [say something negative], I’ve always looked at that as that is your issue; that is not my issue. If you have a problem, it’s your problem; it’s not mine. That’s the way I’ve been.”

Rettstatt has clearly advanced up the ladder — judging at the highest levels of the sport and serving as a vice president of U.S. Figure Skating — but had anyone tried not to promote him, he would have stood his ground and persevered until he received what he rightfully earned. His motto during his early years as a judge was to keep working hard and learning the craft.

“When I was coming up the ladder, especially when I was starting as an official, it was at the time of the AIDS crisis and a huge part of the gay movement was awareness,” said Rettstatt, president of Selected Escapes, representing luxury hotels around the world. “In the sport at that point, there were already some key people who were coming out pretty visibly. For me, it felt that our sport — whether internationally or domestically, give or take some countries — was always quite inclusive.

“It’s never felt not safe for me. Nothing has ever been spoken or alluded to me that somebody held back marks or judged in a certain way because of somebody’s sexuality. Everybody should be judged fairly.”

The international judging system has propelled inclusivity, according to both Rettstatt and Ward Helms, the first African American to judge at the U.S. Figure Skating Championships.

“One of the best things that has happened for gender expression and non-traditional performances in figure skating is IJS,” Ward Helms said. Having components forces judges to clearly assess their impressions of a performance.

“Did the performance make sense? Did the choreography make sense? Did the skater’s way of telling a story make sense? Was it original? Really breaking things down into those components and sub-components, I think makes it much more difficult to do the old 6.0 ‘I just wasn’t feeling it’ or ‘the performance didn’t connect with me,’” Ward Helms continued. “When you have these glib, dismissive ways of defending your mark, you have more wiggle room to be discriminatory or have a little too much of your personal opinion mixed in than actually coming up with a mark for what happened on the ice.”

This allows skaters to be expressive and creative as well as using non-traditional music. In reviewing marks, judges must articulate why they gave the marks they gave. Ward Helms trial judged at least one U.S. Championships under the 6.0 system, and she noticed a major shift under IJS in how people discussed that second mark when it was broken down into components.

Ward Helms also said IJS forces judges to be more expansive in their knowledge of cultural references. It’s more than classical music and movie musicals. She was working on the Judges Education and Training program at the U.S. Figure Skating Championships the year Adam Rippon presented a program that included vogueing.

“Part of my assignment was to talk through what the cultural relevance was,” Ward Helms said. “Some JETs (judge education trainers) did not know anything about ballroom culture (house-ballroom was an underground LGBTQ+ subculture, currently depicted in the TV series “Pose”) from the ’80s.

“If you’re trialing at nationals, you need to know a deep understanding. We have to know more about culture. Particular performances pushed the envelope and IJS has given us the freedom to reward athletes who are artistic, creative and powerful and maybe don’t fulfill gender norms.”

Rettstatt wasn’t even aware of certain skaters coming out until he recently read a Pride Month article on the U.S. Figure Skating Fan Zone. He certainly hopes today’s skaters feel comfortable being out.

“My era as a skater (ice dance in the 1980s) was a different time of acceptance versus where we are today in 2021,” said Rettstatt, who met husband Leonardo Chavez through judging. “I would certainly hope that those of us who are in the sport show that it is all about who you are that makes you a good human being. Everybody has their own journey and their own timeline of when they feel comfortable. I hope that they would feel that the sport is ready for them whenever they are ready and accepting of them no matter what timeline they choose.”

Ward Helms loved the sport and began trial judging at age 16. She had her first appointment at age 18 and made her debut as a national judge at the 2007 U.S. Figure Skating Championships.

During her undergraduate years at Harvard University (1995–99), Ward Helms regularly judged test sessions at The Skating Club of Boston, during which time she was encouraged by the judging community.

“I truly believe that when a skater is center ice they are very vulnerable and they’re making an offering of themselves,” said Ward Helms, an attorney who is chief diversity officer at Guttman Community College, part of the City University of New York.

She does note that because she has a feminine presentation people don’t usually realize she’s a lesbian.

As she progressed in judging, she did not encounter comments about her sexual orientation, but certainly dealt with some microaggressions about being a Black skating judge. She brought her ex-wife to competitions, and they hung out with other judges from the New York area, including Rettstatt.

“I didn’t feel like I couldn’t be out,” said Ward Helms, who pre-pandemic brought wife Aneal Helms to competitions.

Ward Helms said biases against LGBTQ+ people still exist in the world, and there are states in the U.S. where someone can be fired for being gay. The hesitance a skater may feel about being out can reflect that reality. Slowly, things have changed, citing Rudy Galindo as a game-changer, noting that he endured a lot of discrimination.

“Today, there is a greater appreciation for gender expression and how people express themselves,” Ward Helms said. “I am encouraged that people are feeling more comfortable in being themselves and coming out, but I know that a lot of people choose not to come out until they retire.

Ward Helms was featured on U.S. Figure Skating’s Pride Month Instagram Live with host Eliot Halverson, who identifies as non-binary and uses female pronouns. Recently, Ward Helms told Halverson she was on the judging panel when Halverson won her junior title in 2007. Halverson was stunned to learn there was an out, Black lesbian on the panel. That got Ward Helms thinking that she needs to be more proactive in letting today’s skaters know she is out and proud. Don’t be surprised if at the next competition she’s wearing a Pride pin.

“Being out is an act of activism,” Ward Helms said. “It is not safe for everybody. I will forever be out and remind people of who I am and who I love in the hopes that it makes other judges feel safer and athletes feel safer. We’re moving in the right direction.”