Home is Where the Heart Is

Hamilton Proud to Welcome U.S. Figure Skating Back to Nashville 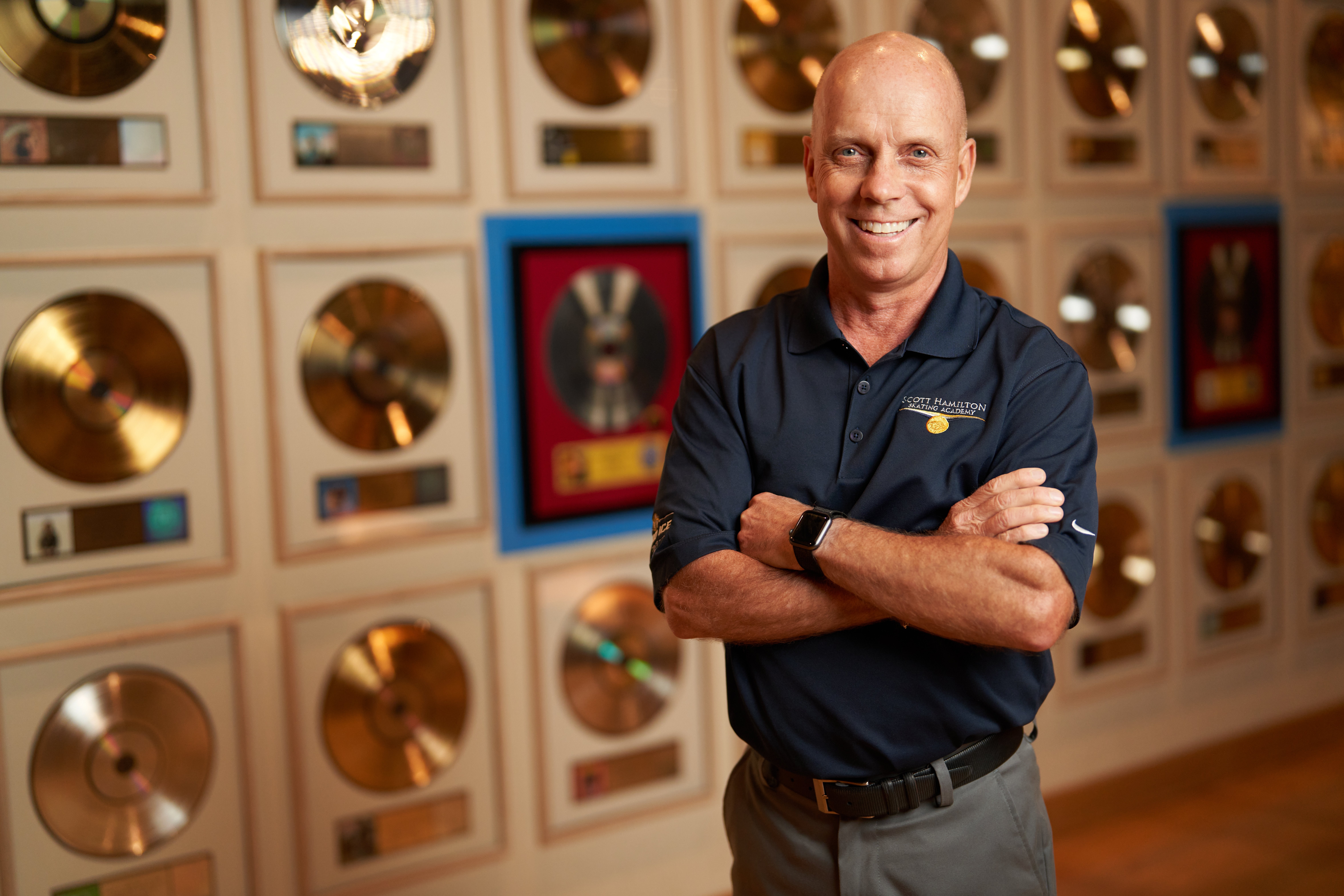 Growing up in Bowling Green, Ohio, in the 1960s, Scott Hamilton was raised on what he referred to as “Rust Belt Rock.” He was addicted to the radio, made frequent trips to the record store and counted classic rock bands such as Led Zeppelin, AC/DC and Cheap Trick among his favorites growing up.

“Music was always kind of my friend,” Hamilton said. “I drew incredible inspiration from it.”

While rock was his birthright, over the years he expanded his musical horizons to include classical, jazz and rhythm and blues to his repertoire. Figure skating goes hand in hand with music of all forms. As a competitive skater, Hamilton performed to everything from Benny Goodman’s “Sing, Sing, Sing” to Camille Saint-Saëns’ “Samson and Delilah” to Tchaikovsky’s “Swan Lake.”

Although Hamilton established flair and athleticism with his skating as a competitor, it really was after he won the 1984 Olympic gold medal that he emerged as a performer on the ice. He started his own tour, Stars On Ice, and began teaming up with choreographers and top musicians to create programs to live music in addition to recordings. As a professional skater, he became Scott Hamilton, the entertainer, adding back flips to his routines (they are not legal in competitive programs) and extending musical boundaries (one Stars On Ice show was dedicated to Led Zeppelin, for example). It wasn’t until he met his wife, Tracie, that he started listening to country and Christian rock.

So today, 37 years after being crowned Olympic champion, it is only appropriate that he finds himself in the country music hotbed of Nashville, Tennessee, aka “Music City,” and the city that is hosting the Toyota U.S. Figure Skating Championships scheduled for January 3–9, 2022.

There isn’t any place Hamilton would rather be, and he gets to combine his two passions — music and skating — in a town he has embraced as home.

“For a kid growing up in northwestern Ohio, it’s amazing how many people I’ve gotten to work with who are now acquaintance friends, and some have become friends,” said Hamilton, who has been able to collaborate with music giants such as Aretha Franklin, Amy Grant and Cyndi Lauper. “I’m still the fan, that kid in the record store, and it’s really cool that I can combine my two loves with music and skating.”

Nashville might be better known for the Grand Ole Opry than it is for Salchows, but the city has a special connection with figure skating. In 1997, when it first hosted the U.S. Figure Skating Championships, nationals were the opening event for the city’s new arena. Twenty-five years later, the same arena (since renamed Bridgestone Arena) will host the event where the 2022 U.S. Olympic Figure Skating Team will be named.

Hamilton, for one, is a big reason why the championships have returned to Nashville. The story goes that Hamilton, a four-time U.S. champion, was talking at a dinner with a friend about how Nashville would be a great host for the event. Not long afterward, Hamilton was contacted by Sean Henry, owner of the NHL’s Nashville Predators, and soon Hamilton was making a case for the city to bid for the event.

“Nashville is about the size of your pinky fingernail in terms of connectivity,” Hamilton said. “The Nashville Sports Council and the Predators put a bid package together and showed leadership in the sports community. They were unbelievably hard-working in getting this done.”

Hamilton, who was raised in the Midwest and later lived in Denver and Los Angeles, never imagined Nashville would become home. He had not skated much in the city, although he does recall performing in Stars On Ice in an auditorium theater. He had been living in Los Angeles and, with Tracie, who hails from Jackson, Tennessee, enjoyed California living. But they did not want to raise their son in Los Angeles. At the same time, the couple had befriended none other than country star Brad Paisley and his actress wife, Kimberly Williams, who split their time between Los Angeles and Nashville.

“I think Brad strategically tried to get us to move out to Nashville so Kim would have a friend,” Hamilton said, with a laugh.

Whatever the plot was, it worked. The Hamiltons have been in Nashville for 15 years, and they have planted deep roots. Hamilton became a Predators’ season-ticket holder shortly after moving to town and has loved everything about being in the city — from the music to the skating community to the golf courses (Hamilton’s third passion).

In addition to Paisley, Hamilton has found himself in the same circles as other country stars such as Sheryl Crow, Jewel and Dierks Bentley. And he has been able to pair his passion for country music with skating, as many of the top music stars have performed in Hamilton’s ice shows.

“It is so incredible to work with these iconic artists, and it is fun to bring that music to life in a new way, and it’s really great to showcase skating in a different way,” Hamilton said. “Nashville offers me a whole new opportunity to connect.”

Although Hamilton was not in Nashville when the city hosted the U.S. Championships 25 years ago, he does vividly recall the competition from that event.

“I remember watching nationals on TV in the dressing room while I was touring with Stars On Ice,” Hamilton said. “Interest in skating was through the roof back then, as it was just three years after Tonya (Harding) and Nancy (Kerrigan), and then you had Tara (Lipinski) and Michelle (Kwan).”

A quick recap from those U.S. Championships — Lipinski upset Kwan to win the U.S. title (Kwan led after the short program) to become the youngest skater, at the age of 14, to claim the American crown; Todd Eldredge captured his fourth title after a wacky free skate in which Michael Weiss initially was credited with landing a quad toe, but a few hours later officials deemed he two-footed the landing; Kyoko Ina and Jason Dungjen won their first U.S. pairs championship; and Elizabeth Punsalan and Jerod Swallow earned their fourth title in ice dance.

A couple of months after those U.S. Championships, during the 1997 World Championships, Hamilton announced he was diagnosed with cancer. Ever since, Hamilton has been in and out of the hospital for treatment for testicular cancer and three brain tumors, but he has remained positive and has used skating as a vehicle for giving back.

He created the Scott Hamilton C.A.R.E.S. Foundation (Cancer Alliance For Research, Education and Survivorship) and is a regular for speaking engagements, chatting on podcasts, producing Sk8 to Elimin8 Cancer events and directing his longstanding Scott Hamilton & Friends galas — all to support cancer research and survivors.

The Nashville show this year featured live country music from Lady A, Maren Morris, For King & Country, Grace Potter, CeCe Winans, Hunter Hayes and Sixwire. Skaters, including Olympian Jeremy Abbott and U.S. champions Ryan Bradley and Alissa Czisny, performed. The show was held on the same ice where the U.S. Championships will take place in January.

Hamilton continues to have a special place in his heart for competitive skating, and he is especially excited to watch the championships. Many of the top U.S. skaters traveled to Nashville in August to participate in Champs Camp, which is designed to prepare elite skaters for the competitive season; Hamilton had a chance to catch some of their practices.

He marveled while watching five-time and reigning U.S. champion Nathan Chen, who ripped off quad after quad. Chen won Skate Canada in October and is one of the favorites to win gold at the Olympics.

“It was great to see all of the skaters here,” said Hamilton, who captured U.S. titles from 1981 to 1984. “And Nathan. Wow! He’s just so chill. He’s so cool. Our women are really talented, too, and we are deep; and our pairs teams just keep getting stronger.

“I keep telling people in Nashville that they’re going to announce the Olympic team at the national championships, and when I tell them that, they want to be a part of that excitement. They want to go and get tickets. The anticipation of that moment you can’t predict is really what takes your breath away.”

Hamilton does not skate much these days, but he is never far from the ice. He is the founder of the Scott Hamilton Skating Academy, located at the ice centers in Bellevue and Antioch, Tennessee; he even teaches an occasional Learn to Skate lesson.

Back in 1997, there were some top coaches in the Nashville area, among them Bill Fauver, an Olympic pairs skater. Hamilton’s arrival brought a new level of Olympic flair to the city. An Olympic champion and a popular skating broadcaster, Hamilton, just by moving to the city, has attracted even more skaters and coaches to train in Nashville.

One of Hamilton’s biggest achievements is that he was able to lure Kori Ade, who guided Jason Brown to the Olympics in 2014, to Music City. It took three years to get Ade to relocate to Nashville from Colorado, but she is now the elite figure skating manager at the Scott Hamilton Skating Academy.

“It took a lot of pleading and begging but she was the only one I wanted,” Hamilton said. “She is going to build the program and bring skaters from Learn to Skate all the way through.”

Having the U.S. Championships in the city can only raise the attention to the sport and, hopefully, encourage more people to lace up skates.

It also will shine a spotlight on the city Hamilton has come to call home.

“I think there is no city in the world that is better at hosting big events than Nashville,” Hamilton said. “We are a hospitality city, and we take tourism seriously. The Bridgestone Arena is perfectly located, and the sight lines are flawless. There isn’t a bad seat in the house, and the food options in the building are broad and delicious. Bridgestone is also walking distance to almost every downtown hotel and restaurant."