Gracie Gold on getting back up 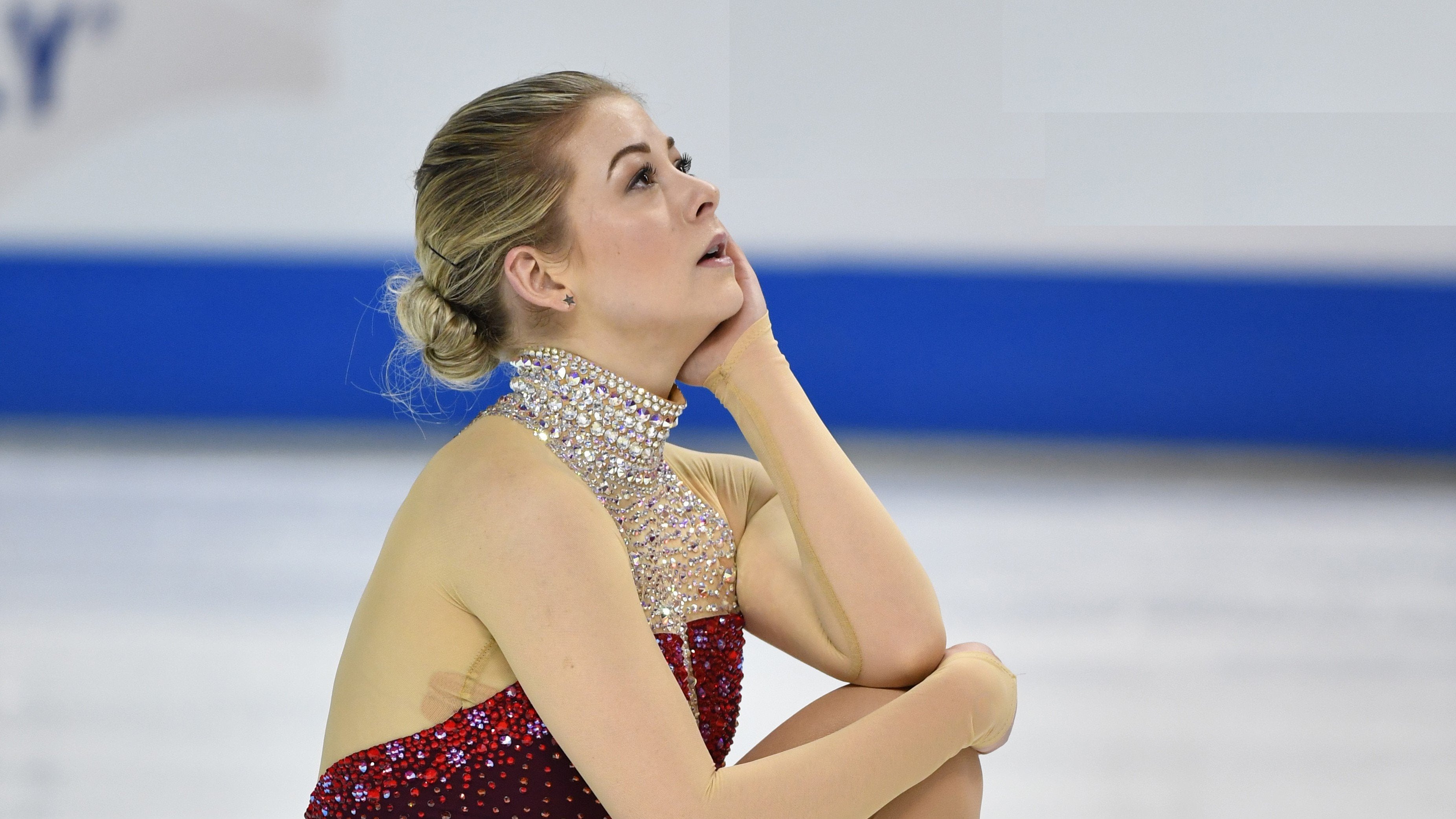 Editor’s note: Olympian Gracie Gold was selected as one of eight U.S. Figure Skating Get Up Ambassadors. She shares her Get Up journey in this candid Q&A with writer Darci Miller. A related Get Up story about Gold appears in the June-July issue of SKATING magazine.

The two-time U.S. champion, 2014 Olympian and Olympic Team Event bronze medalist checked into an in-patient treatment program for anxiety, depression and an eating disorder in 2017. While a recovery alone would’ve been remarkable, Gold did one better, returning to compete at the 2020 Toyota U.S. Figure Skating Championships.

Recently, Gold spoke with U.S. Figure Skating to discuss her road to recovery, her return to skating and what it’s meant to share her story.

When did you decide to come back to skating? Was that always your intent?

Gracie: Something just told me my time in skating wasn’t done yet. Someone wise once told me, “Walk this path as long as it serves you.” And so I just was going to do that. I was going to keep walking until I felt like it was absolutely not serving me, or I felt that there was another path that would serve me better. I just kind of kept going and going. And then of course, I started to get some traction and momentum starting last summer, building through the fall. By the time U.S. Championships rolled around, we had something pretty good to work with. But yeah, it was very much the just keep going. To literally get back up. I kept working the process.

Before you stepped away from skating, you had an incredibly successful career and really had nothing left to prove. Was there more that you wanted to do or could you have been content with what you’d already accomplished?

Gracie: It was never about needing to prove anything. Skating was this huge part of my soul, and they’re forever intertwined. When I went into treatment, I didn’t go in thinking that I was going to retire. So if I had, I think it would’ve been different. Getting up and getting back into skating was just for me, because I felt like I didn’t part ways with such a huge part of myself on my own terms. I hadn’t made peace with it. It wasn’t a fear thing, or a disclaimer, or a way to back out. I truly felt like, if I can’t come back to a certain level or the level that I was, I just needed to close that chapter and finish that section of my life on my own terms. And I felt like I didn’t. I needed to close that chapter, and lay to rest something that I carry with me and something that I left a huge part of my soul and life with. I feel like if people leave skating or anything in life with feelings of bitterness, or they end it not on their own terms, I feel like that’s when resentment starts. That’s something I couldn’t live with, and didn’t want to live with. I needed to see. I needed to finish the chapter. And whatever way that looked like, it needed an ending that I wrote.

When or how did you choose to be so open about what you went through? What went into that decision?

Gracie: I get asked this a lot. I didn’t just wake up one day, or just have a light bulb (moment) where I was like, “I’m going to tell my story,” because it is scary to do that. It’s really the ultimate act of bravery. At first it was kind of for an explanation, because if you remember, I essentially dropped off the face of the planet for about 90 days, and then I popped back up with a brown bob cut in Arizona. And it was a little bit like, “Wait, what is going on?”

I think the first time I said it I was like, “Oh, I was clinically depressed in Detroit, to the point where the chemistry in my brain had literally changed, which led me to feelings of suicide and disordered eating that had plagued me for awhile, and then I ended up in treatment.” And then, because I had processed all that, I didn’t know how shocking it would be, or eye-opening, or inspiring for people to share their own (stories).

I was uncomfortable at first sharing, because of the stigma of like, “Oh, what does she have to feel bad about?” and kind of bringing awareness to mental health and how it affects everybody equally. Just because you’re an Olympian — which means you’re really good at your sport —  doesn’t mean that you’re not subject to any other things like other people are. You can still have health issues and be an Olympian. You can still have mental health issues and be an Olympian.

But after sharing my story, it just kind of snowballed. People from all over the world were sharing their stories. I even got a few that were like, “You saved my life.” And I was like, “Oh my god, what?” That’s a compliment I’m not deserving of. I do not deserve that credit at all. They saved their life.

What did that positive feedback mean to you?

Gracie: It’s sometimes still difficult to process or comprehend. Reading other people’s stories (while in treatment) brought me so much comfort. It didn’t occur to me that my story would do the same for others.

At first it was, and still is, kind of unreal that my story … would inspire others to also make the decision and take that leap of faith, to try and live a better life, a happier life, and one that’s more authentic and true to them. It still blows my mind. I don’t even know what to say sometimes.

I remember at U.S. Championships, the amount of people who came up to me crying and were like, “You don’t understand what you’ve done for me.” Or a lot of parents, sobbing parents, said to me, “My daughter… we read your story, we’ve been following you.” I didn’t even know what to say, because for me, it’s just me. Maybe when it happens to you, you don’t understand the impact, but it’s left me speechless over and over again.

Tell me about the standing ovation at the U.S. Championships.

Gracie: I ended in my lunge, and I was like, “OK, that was pretty good. That wasn’t too bad.” But then the audience erupted. The noise was overwhelmingly loud and it was for something bigger than the performance. That was different, because that doesn’t happen a lot in skating. But they were standing up —the feeling and the energy was for something bigger than skating. It felt like it was for me as a person, and that was different. And then how long the applause lasted. At first, I wasn’t crying because I had so much adrenaline, but then the moment immediately brought tears to my eyes, because the applause was still going at the same intensity even while I was bowing.

I was aware the skating didn’t deserve that, but it was just that moment that was bigger than skating, bigger than my performance. It felt like it stood for something and that I was being applauded for my journey and for what that moment in my life symbolized.

Do you have advice for someone who’s struggling with something similar to what you went through?

Gracie: Reach out. But of course that’s scary, and there’s the “how do I do it?” It can be difficult to explain what’s going on in your mind or in your life if you’re not quite sure. I know I struggled with that because a lot of the symptoms when you’re struggling with mental health can be dismissed as behavioral.

My depression manifested more in an absolute, not just lack of energy; my body felt like it was made of cement. That’s the difference. It’s not that I don’t want to do to all these things that I need to do, it’s that I felt like my body was made of cement. The act of getting out of bed, getting ready, getting coffee, getting breakfast, getting into the car, warming up, skating — it was so overwhelming. It literally brought tears to my eyes that I used to do this without thinking and now brushing my teeth feels like a big win.

I thought depression was that something bad happens and then you felt sad and cried a lot, and that it showed in more obvious ways. And everyone is comfortable supporting someone in their mental illness when the symptoms present in the traditional ways, or ways that we’re told.

But if you’re struggling, reach out and just go for it. Like anything in life, you just have to start. You can say, “Things aren’t great right now and it feels like this” just to start.

The first time I tried to explain what was going on in my mind and my life, it took me an hour to try to express it as I fumbled my way through a kind of inarticulate explanation. There’s no shame, but actually there’s great strength, courage and bravery in saying, “I’m not OK.” Just tell someone.

It’s painful and difficult to change because it’s growth, it’s personal growth, and there can be a lot of mourning in growth. Those are called growing pains. It’s not like I’m perfect where I don’t have depressive episodes or things like that. You’re not just fixed.

If you ask someone who’s clinically depressed, and they’re like, “Maybe 10 percent of the time I feel OK and 90 percent I feel like trash,” even if you can get on line enough to feel 70 percent good and 30 percent of “I still have some symptoms,” that change is so remarkable and you notice it in strange times. But you just realize it’s all going to be OK. Different, but it’ll be OK.

Is there anything else about your journey that is important for people to know?

Gracie: Although I was the one who got back up, it was in so many ways a team effort. I call it my nest, and I had to kick a lot of people out of the tree who I didn’t want to, but sometimes you have to do that.

Those are the people who mean everything, because someone’s importance is not how long they’ve existed on your timeline, but how genuine and impactful their presence was in your time with them.

I found people who didn’t just restore my faith in humanity, but who truly reminded me that not only do good people exist, they exist sometimes in unlikely places. They take many different shapes and forms and it was important to find those people — your home team. I try to express to them that the standing ovation at U.S. Championships wasn’t just for me and my story, it was for everybody who played a part.