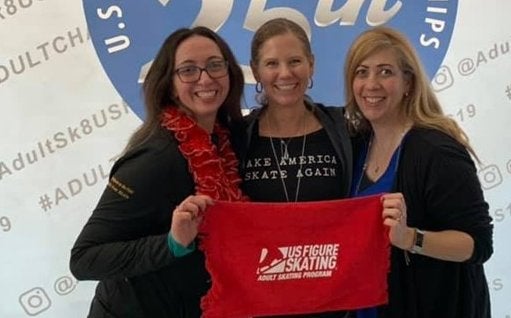 At the 1939 Middle Atlantic Championships, the Skating Club of New York offered a “Veterans Waltz” event. Turnout was low, reportedly because competitors were uncomfortable admitting their ages.

How the tables have turned.

Now at the annual U.S. Adult Figure Skating Championships, skaters celebrate “aging up” to a new group. Age isn’t kept secret and is instead rewarded. The oldest competitor receives the Yvonne M. Dowlen Trophy and all competitors over the age of 71 receive the Skate Forever Young Award.

It wasn’t always this way.

Things started picking up in the 1970s and ‘80s when several milestones occurred: U.S. Figure Skating added an adult dance test category in 1977 and the U.S. Synchronized Skating Championships began in 1984 (adult synchronized skating was offered since the beginning, then masters was added in 1995).

In 1990, adult bronze, silver and gold free skate tests were created. As a passionate and devoted adult skater at the time, Rhea Schwartz dreamed of more.

“I thought improvement could be made,” she said.

After five years of lobbying, 1995 became a historic year. The first U.S. Adult Figure Skating Championships were held in Wilmington, Delaware, and the Adult Skating Committee was established with Schwartz as the inaugural committee chair.

“We were concerned about low turnout and hoped for 200 skaters,” Schwartz said. “Instead, 408 skaters competed. An advisory group was established to develop what we think of now as the Adult Skating Program.”

When the group was reconfigured, Paula Smart joined. She later served as the second Adult Skating Committee chair.

In a 2004 interview, Smart, who passed away suddenly in 2009, said, “You’re never too old to learn a new skill. You may not learn a double jump or a triple jump, but many of the skills in skating are basic repetition and can be performed like the scales of a piano, like the edges that you practice.”

Twenty-six years since its inception, the Adult Skating Program still carries on the vision of adult skating’s pioneers, Schwartz and Smart, maintaining that the ultimate success in adult skating is continuing to be able to skate for life.

A noteworthy change took place in 2001 when the U.S. Adult Sectional Championships were added to the adult qualifying event structure. This gave adults another competition they could call their own.

“The U.S. Adult Championships has evolved along with the sport and our athletes,” said Lori Fussell, former Adult Skating Committee chair and current national vice chair for adult skating on the Competitions Committee. “There are now many ways to achieve and succeed through quality and longevity in the sport, in addition to the more traditional success through placement. We give special recognition for our athletes with more life experience, offer two team trophies, give special achievement awards to encourage skating quality and we offer a Lifetime Competitor Recognition Program.”

Growing interest in adult tests and competitions resulted in a big milestone in 2004.

“The year that the committee became permanent was pretty exciting,” former Adult Skating Committee chair, Lexi Rohner, said. “I remember sitting in the room at Governing Council. This moment meant that adult skating was fully recognized as part of U.S. Figure Skating and was no longer only an idea.”

Acceptance of adult skating has continued to improve.

“Today we have our own adult qualifying season and embrace adult skaters of all backgrounds from beginners to former elite athletes in every category of competition and testing that U.S. Figure Skating has to offer,” Fussell said.

In 1997, the Georgia Figure Skating Club held the first Peach Classic in Duluth, Georgia. This led the way for the creation of many long-lasting adult-only competitions.

Rob Lichtefeld has been a part of Peach Classic for many years.

“We have some long-time attendees and some very vocal attendees,” Lichtefeld shared.

Each Peach Classic concludes with a team event, which he describes as “always hilarious,” recalling the year when a team created a theme surrounding the “different ages of Rob.” For Lichtefeld, Peach Classic was also his first competition as a competitor.

“I just knew I had to keep it going for those skaters who came after me,” he said.

One year after the first Peach Classic was the first Deborah Burgoyne North American Invitational, which Mary Moss has co-chaired since the early days. On the evolution of adult skating, she remarked, “It continues to grow in all areas. There really is a place for all adult skaters to compete. You just have to find which passion suits you.”

“With a long history of adult participation within the club, the board felt it was important,” Delano said. She fondly described New Year’s Invitational as “low key, but impactful to the skater.”

Since 2002, Buckeye Adult Open has provided an all-adult competition in the fall (when most clubs are focused on standard-track regionals and sectionals).

“The FSC of Cincinnati had a vibrant group of adult skaters,” said Cathy Brinkman, who co-chaired the first Buckeye Adult Open with Rae Brooks of the South Dayton FSC. “Loyal competitors, loyal officials and other local clubs make Buckeye special.”

Another key milestone took place in 2004 when the first National Showcase was held with adult and masters events, and in 2018, the adult parade of champions was added to the event. In 2008, the first National Theatre On Ice competition was held in Burlington, Vermont, and soon after, adult Theatre On Ice teams gained the opportunity to compete internationally at the Adult Gold Cup.

International adult skating has also seen significant growth over the years. In 2005, the International Skating Union held the inaugural ISU International Adult Figure Skating Competition in Oberstdorf, Germany, for skaters ages 28 and older. In 2016, the first North American adult ISU competition was held in Vancouver. The event was held in the United States for the first time in 2019, with Lake Placid, New York, serving as host and Rhea Schwartz delivering the welcome speech for the athletes.

The growth of international skating was inspired by the example which was set by U.S. Figure Skating.

Looking back on the evolution of adult skating domestically and internationally, Rohner shared, “The U.S. has easily been the global leader in adult skating, and the first to create a national championships. Adult skating, while initially small compared to other domestic membership categories, has grown rapidly when compared to other countries. For almost half a century, every country has copied what we’ve done, and looked to us for inspiration.”

A timeline of U.S. adult skating history will be available in the May 2021 SKATING magazine.