U.S. Figure Skating is currently celebrating its centennial anniversary. Not all superheros wear capes and not all superfans wear skates. There are plenty of people who contribute to the sport from the other side of the boards. Claudyne Cassella Hutchinson is a fixture in the audience at skating competitions domestically and internationally. She can sometimes be spotted in a signature blue scarf, but other times opts to blend in with the crowd. Even during this spectator-less season, this figure skating superfan’s presence has been known in the form of a cardboard cutout. 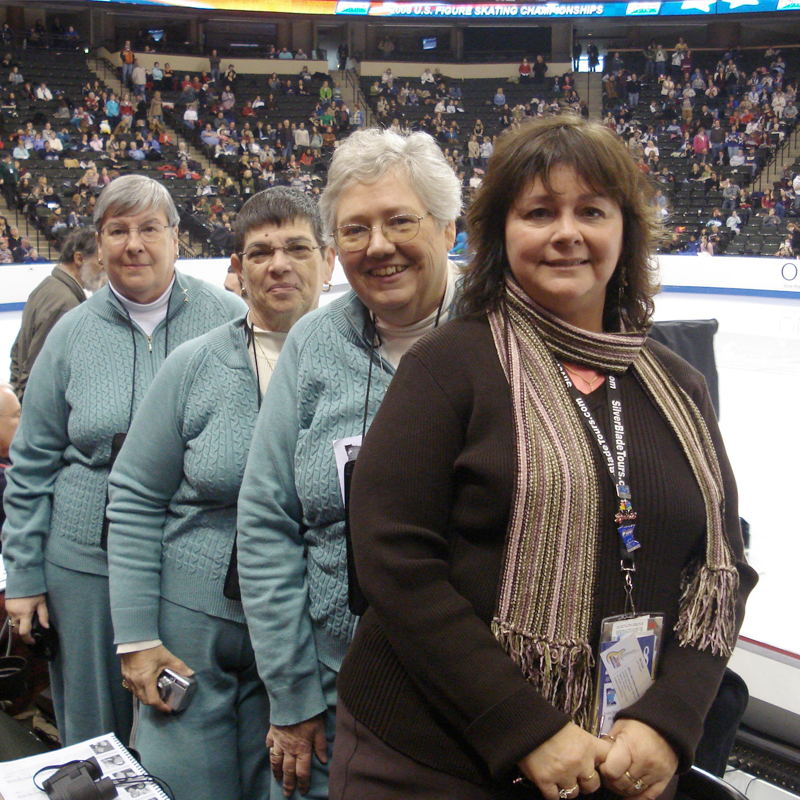 U.S. Figure Skating is currently celebrating its centennial anniversary. Not all superheros wear capes and not all superfans wear skates. There are plenty of people who contribute to the sport from the other side of the boards.

Claudyne Cassella Hutchinson is a fixture in the audience at skating competitions domestically and internationally. She can sometimes be spotted in a signature blue scarf, but other times opts to blend in with the crowd. Even during this spectator-less season, this figure skating superfan’s presence has been known in the form of a cardboard cutout.

This season, Hutchinson has dutifully been watching all the skating competitions on television and streaming on Peacock. However, she cannot wait to get back into the energized arena for in-person events to clap along to the music.

“There are certain skaters throughout the years that you really got into. Everybody was standing up before the skater finished competing,” she said. “One example was Jason Brown after Riverdance. It was electrifying and it was an Olympic year. There’s been some of those moments where a skater will move you to that type of reaction.”

Music selection is so important when it comes to connecting with the crowd and the judges. It can make or break a season and the entire trajectory of a skater’s career.

“I really focus on listening to the music and how that skater—be it woman, man, or team—can interpret that music on the ice and project their emotions and feelings out to the audience,” she said. “Lyrics have changed the game. I really think it’s important to have the whole package—the skating, the costuming, the choreography, the music. I happen to like when I hear rock music like The Beatles or Santana. I really enjoy it [because] I can relate to that music.”

Of the hundreds, if not thousands, of routines Hutchinson has seen over the years, a select few stand out. In addition to Brown’s Riverdance number, she thoroughly enjoyed Alissa Czisny’s interpretation of Dr. Zhivago, dancing and singing along to Nathan Chen’s Rocketman, Michelle Kwan’s “Fields of Gold”, Todd Eldredge’s 1996 World Championship-winning free skate to the soundtrack of the film First Knight, and the creative choreography and costuming of Madison Chock and Evan Bates’ slithering snake routine.

“They were so innovative. That was so well executed,” she praised Chock and Bates. “The costuming was just beautiful, the intricate beading. Looked like snakeskin. It was beautiful how they intertwined with one another and really improved a lot in sense of presentation and connecting with one another too…I like it when skaters skate outside the box. Kaitlin [Hawayek] and Jean-Luc [Baker], they skate out of the box, especially for their exhibition program [to Swan Lake].”

As the owner of Silver Blade Tours, a company her late mother founded in 1994, Hutchinson makes travel arrangements for groups of spectators to attend figure skating events worldwide. The DeLand, Florida, resident plans all the ground transportation, breakfasts, luncheons, sightseeing tours, hotels, and most importantly, event tickets in the first couple of rows of the arena, for U.S. Figure Skating Championships, Worlds, Europeans, Four Continents, and the Grand Prix series. Depending on the locale, Hutchinson is responsible for groups of 25-75 skating fans.

Because skaters feed off of the energy of the crowd, she really loves bringing Americans abroad to root on the Team USA skaters when they are far from home. In Vancouver in 2001, Hutchinson didn’t want to get outdone by all of the maple leaf flags in the crowd, so her friends and she made flashcards that, when held up, looked like a tremendous American flag that spanned a section and a half at the end of the arena. Whenever a Team USA skater took the ice, they’d hold up the star-spangled cards.

Seeing skaters and their families on foreign soil is where Hutchinson has gotten to connect with them most. While standing outside of the arena in Nice, France, Czisny approached her and said hello and she gave her mom tickets. She got to meet Chock, Bates, Madison Hubbell and Zachary Donohue, as well as their parents, in Canada. Brown recognized her in Helsinki at the World Championships and introduced her to his folks. The skaters are really appreciative that Hutchinson and her clients travel so far to support them.

Having attended competitions, receptions, and shows for the last several decades, Hutchinson is a “skateopedia” of stories, some that intersect with history. The 1991 World Championships were held in Munich, Germany, only two or three weeks after the Persian Gulf War ended. As a safety precaution, American spectators were discouraged from waving the flag. The American women swept the podium with Kristi Yamaguchi coming in first, Tonya Harding in second, and Nancy Kerrigan in third.

“That was one of the coolest moments we saw. They didn’t have enough U.S. flags, so they had to take a U.S. flag from the side of the arena for the podium,” she remembered fondly. “It’s always fun to be in the audience when a skater from your country either in the U.S. or overseas [wins] and they play the National Anthem. It’s so moving.”

Figure skating tourism has taken Hutchinson all over the globe. She’s been to Japan, Switzerland, Finland, Russia, France, Italy, England, Czech Republic, Germany, Denmark, Canada, Sweden, and Australia, as well as more than 25 U.S. Championships in cities across the country.

Skating has been part of Hutchinson’s life for more than 40 years, so quite a large chunk of the 100 years of U.S. Figure Skating. In that time, she has witnessed the evolution of the sport and how the athleticism has progressed, particularly in recent years.

“I think it’s wonderful that U.S. Figure Skating has made it to the 100-year mark. It’s time to reflect on those who have really formed the sport in different ways—the skaters, the coaches, the officials, [and] the media has come a long way,” she said. “I used to look forward to watching Worlds and that was the only competition that was on television. I think [expanded broadcasting and streaming] has made the sport become stronger and the association is really working towards becoming more spectator-friendly.”

To honor the skaters who perished back in 1961, Hutchinson makes a valiant effort to donate to the Memorial Fund. She is also an advocate for Friends of Figure Skating and encourages clients to register for those fan meet-and-greets, and to join U.S. Figure Skating and Professional Skaters Association (PSA), even if they themselves don’t skate. You can contribute to the sport by attending competitions as a spectator or volunteering with a local skating club and at U.S. Figure Skating sponsored events.

Her Own Skating Journey

Hutchinson was introduced to the sport as a child because her great uncle co-founded the Skating Club of Hartford and Charter Oaks Figure Skating Club. She got her first pair of skates at age 12 and went on to the pre-silver level of ice dance. Her parents and all five of her siblings also skated. Her brother, Francis Cassella, is the most accomplished of the family, having won the junior ice dance title at the U.S. Championships in 1971.

After many years off the ice, Hutchinson laced back up about 20 years ago and attended an adult skating camp in New Jersey where she got to skate with 1960 Olympic champion Carol Heiss Jenkins, Olympians Tai Babilonia and Randy Gardner, and 1994 Olympic champion Alexei Urmanov. She even got to do some pattern dances—European Waltz and Argentine Tango—with Jerod Swallow. Due to a serious motorcycle accident, Hutchinson hasn’t been able to skate since 2003.

“[It’s] on my bucket list to one more time get back on the ice just to see how it feels,” she said. As a spectator, she can feel the edges within her soul as she watches the competitors out on the ice.