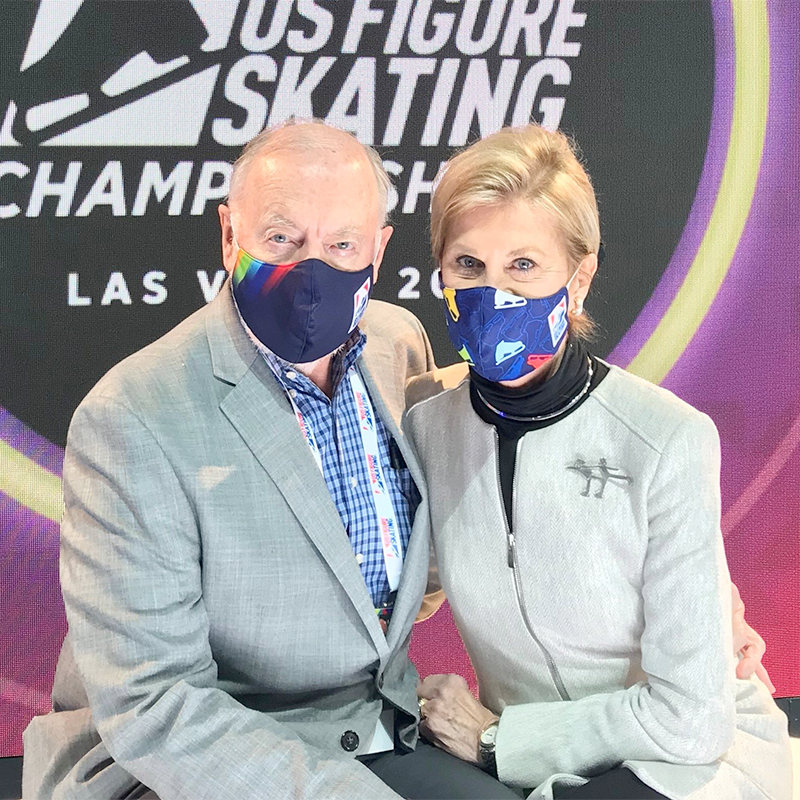 “I’m so thankful we got those kids in there and they really had that in-person opportunity,” said Tanger. “Having worked so many virtual events this season…I was just delighted to go to Nationals. … I was so happy to see those skaters in person rather than watching their videos or talking to them in a Zoom room. The same with the coaches and my colleagues.”

The two weeks in Las Vegas went by quickly and Tanger was fortunate to have her husband, Tom, with her as he served as an accountant. The Tangers, married for 52 years, have shared the skating journey and collaborated on various projects, including him serving as her assistant when she was chief referee at the 2019 U.S. Championships.

“We’ve done competitions together for years; we kind of consider ourselves Team Tanger,” she said.

Over the years, skating has presented many incredible opportunities. Tanger’s two sons, now both adults, got to travel the world with Team Tanger. Both learned to skate, but neither ever took up the sport. She’s also taught three of her four grandchildren to skate.

Tanger has been a member of the Wisconsin Figure Skating Club since she was 10 years old and still sits on its board of directors. “I’ve produced a lot of other judges in that club,” she said. “My husband and I started Skate Milwaukee. Tom and I have a scholarship fund for skaters in the club.”

A lifelong commitment to skating seemed unlikely when an elderly club member approached her shortly before she started college to suggest she try trial judging. Tanger hesitated, but ultimately gave it a go. She progressed and kept at it, adeptly balancing judging with her career—first as a teacher and then in television—until she made skating her sole focus.

“It’s been a lot of years of judging, so I’ve seen a lot of changes,” said Tanger. “I don’t adapt to changes, I’m a part of them. If I am not flexible enough to help change the sport, I should leave the sport. I really want to be part of change.”

Having served as assistant chef de mission for the entire U.S. Olympic team at the 2002 Olympic Winter Games in Salt Lake City, Tanger saw the judging scandal that beset the pairs competition firsthand. When there was talk of developing another scoring system, which became the International Judging System (IJS), she jumped in to participate in its development.

“When they were looking for authors for the components, I thought, ‘That’s my background. I’ll take choreography, composition and presentation. I’d be glad to author that,’” she said.

“We just did a revision of the GOE [grades of execution],” she added. “Change should be encouraged, and you should be willing to embrace it and be a part of the change.”

Tanger recalled phoning Peggy Fleming fairly early in the pandemic to say they wouldn’t be able to hold the Peggy Fleming Trophy in a traditional fashion. At the time, rinks were closing. She suggested to Fleming that if rinks reopened, skaters could be filmed on home ice, submit the videos, and the judges would figure out how to score the competition from home.

“That was our initial project, and U.S. Figure Skating embraced it,” Tanger said.

While Tanger hopes there will be more live skating competitions by year’s end, she thinks we’ll be in a hybrid mode for a long time. She’s pleased with the increased use of technology, which enables her to do monitoring work in even greater detail.

“Uncovering how to do virtual was really important,” she said. “We repositioned ourselves with virtual qualifying for the U.S. Championships.”

“I am extremely passionate about the sport and protecting the sport,” said Tanger. “I’m a guardian of the sport and want to do anything I can to help improve or make things more efficient.

“Being elected is such an incredible honor,” she added.

Her passion and commitment for the sport is driven by the people that surround her—skaters, coaches, judges, officials and friends. Every experience has enhanced her understanding of skating. Getting involved in judging while still in her teens means Tanger has never been away from skating since the day she started.