Longtime competitors return to where it all began: The First State. 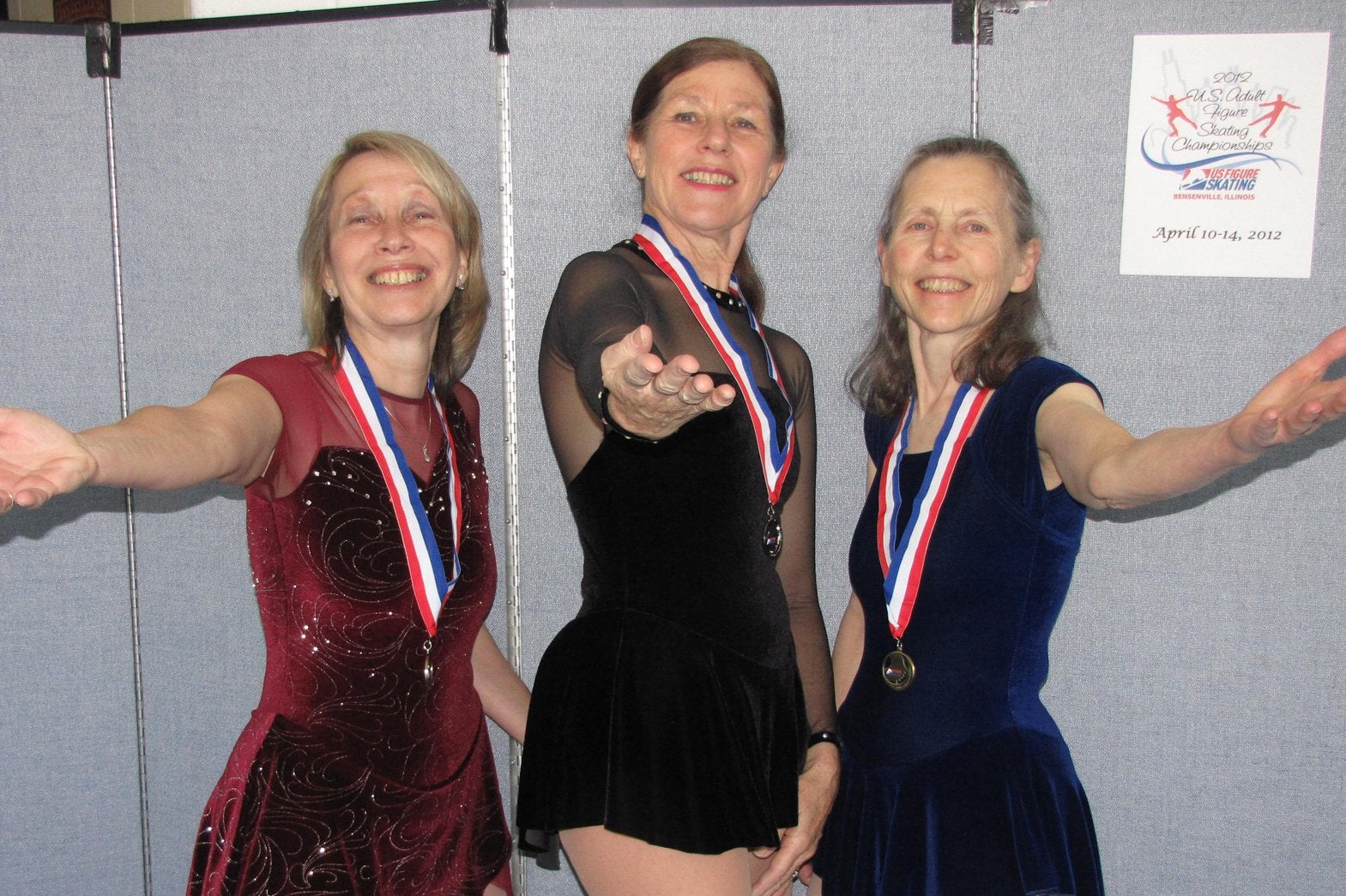 Above: Carol Dors, Janet Long and Caroline Thorington at the 2012 Adult Championships.

“The First Skate in the First State.”

The Skating Club of Wilmington displayed this tagline on the poster for the 1995 U.S. Adult Figure Skating Championships in Wilmington, Delaware.

The year 1995 also marked the official establishment of the Adult Skating Committee, resulting in more opportunities to skate for a lifetime.

With a lifetime of opportunities comes a lifetime of friendship. Washington FSC members Caroline Thorington, Carol Dors and Janet Long met at Cabin John Ice Rink in Bethesda, Maryland, in the 1980s. Their clubmate and friend, Rhea Schwartz, was the founding Adult Skating Committee Chair.

After witnessing Schwartz’s dedication firsthand, the skaters were inspired to compete in 1995: a time when adult competitions were scarce.

“Back then, I was scared to go on the ice in front of everybody,” said Thorington. She was “under the impression that adults never competed,” and this was only her second competition.

“We were proud to be there representing Washington FSC,” Thorington, Dors and Long shared together. “This competition was the beginning of a new era for adult skaters.”

The Adult Championships provides an outlet for adults who have skated since childhood, as well as those who discovered their passion later in life.

“Most people who go to adult nationals skated as kids. I came to skating as an adult,” Long shared. “I was so excited for the first nationals. I was too innocent to be nervous!”

Thorington, Dors and Long have only missed a handful of Adult Championships. They remember the days of registering with a pen and paper, standing in line to sign up for practice ice and packing backup music on cassette tapes.

“I still take music with me just in case!” Thorington shared.

In addition to technological advancement, the trio has seen a positive shift in the perception of adult skating.

“Walking through the door labeled ‘athlete entrance’ in Lake Placid made me see that skating was no ordinary hobby,” said Dors. “We were indeed adult athletes.”

The popularity of adult skating has continued to grow. As of April 2022, the Adult Skating Committee reported that adult skaters make up at least 10.4% of the current full and collegiate members of U.S. Figure Skating. This rise in representation has resulted in many all-adult competitions.

“There are so many more opportunities for adult skaters,” the trio recalled collectively. “Our club inaugurated New Year’s Invitational in 2002. This year we celebrated its 20th anniversary.”

New Year’s Invitational offers a “don’t go it alone” event where two or three skaters compete together. Thorington, Dors and Long compete annually as a trio, noting that this is the highlight of their skating year.

“We are always learning new moves and reusing older ones,” said Thorington. “One of our signature moves is the three-legged camel spin, which we came up with by experiment. It is as challenging as it is fun.”

With three decades of friendship under their wings, Thorington, Dors and Long have shared wins, losses and challenges—both on and off the ice.

This year, it all came full circle as the friends returned to Delaware. In Newark, they were three of the nine competitors in Silver Ladies V: the oldest group of adult silver ladies.

“It was great to see the people I’ve come to know,” said Long. “The spirit of encouragement was the same at the last one as at the first one.”

Now a seasoned competitor, Thorington notes that she still feels the butterflies that she felt as a newcomer but has found ways to combat her nerves.

“Twenty-seven years later, I’m still scared and nervous. But, somehow between 1995 and 2022, I discovered that if I put on a showcase costume, I can pretend that no one can see me,” said Thorington. “I have fun doing outrageous and complicated moves in an unexpected program.”

The friends agree that they still have goals to achieve.

“All these years later, there is still a lot to learn, and we are still at it,” said Dors.

They collectively shared, “We come back for the camaraderie, the travel opportunities and meeting adults who push their limits. We are looking forward to many more Adult Championships in the future. After all, we are trying for the gold Skate Forever Young Awards.”