Editor’s note: This story titled “Filling the Void” appeared in the January 2011 issue of SKATING magazine, on the eve of the 50th anniversary of the plane crash that claimed the lives of the entire 1961 U.S. World Team. Pairs bronze medalists at the 1960 Olympics, Nancy (Ludington Graham) and Ron Ludington (now deceased), describe the heartbreak of losing their teammates and friends in the accident and how the deep void left in both the skater and coaching ranks was filled. 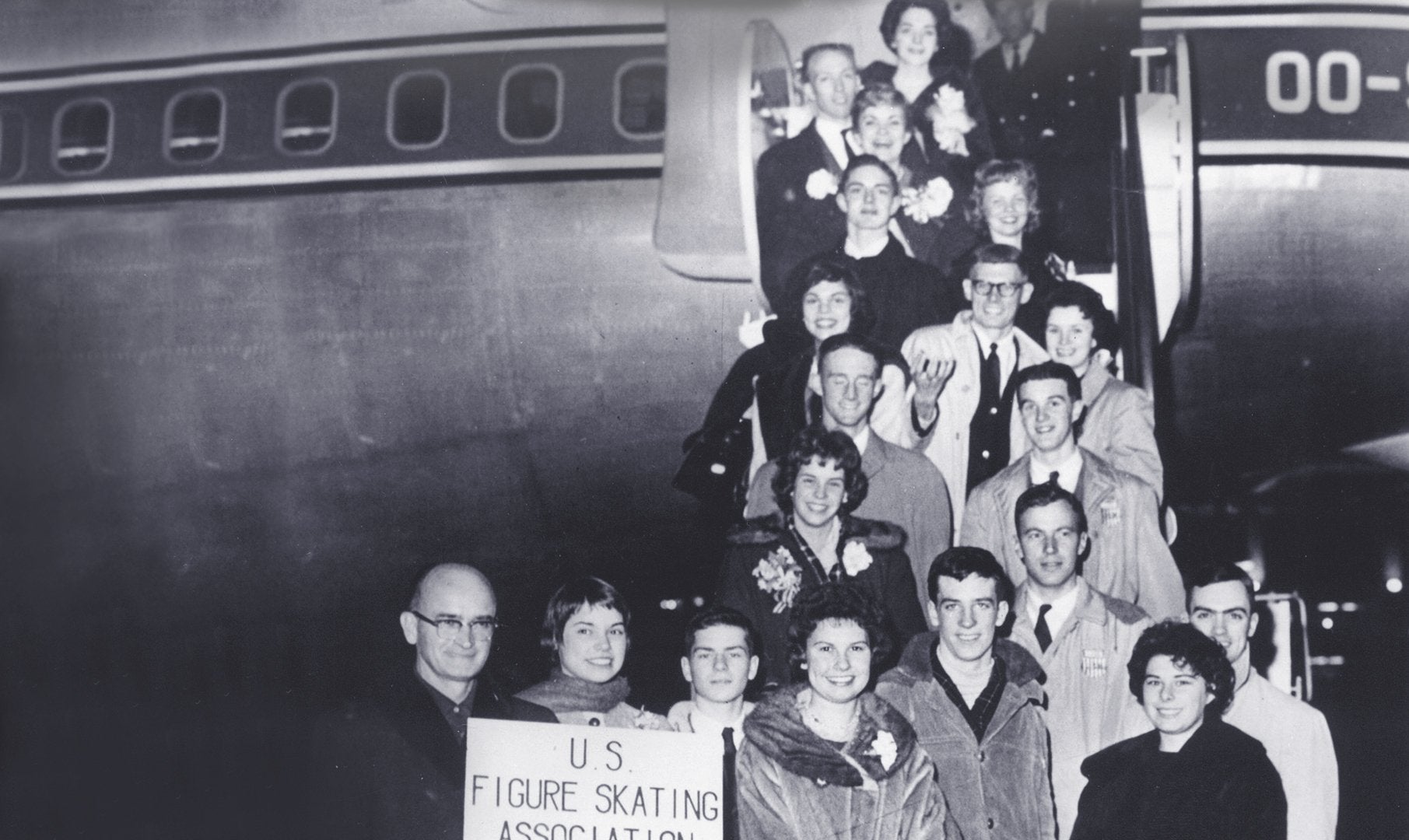 Editor’s note: This story titled “Filling the Void” appeared in the January 2011 issue of SKATING magazine, on the eve of the 50th anniversary of the plane crash that claimed the lives of the entire 1961 U.S. World Team. Pairs bronze medalists at the 1960 Olympics, Nancy (Ludington Graham) and Ron Ludington (now deceased), describe the heartbreak of losing their teammates and friends in the accident and how the deep void left in both the skater and coaching ranks was filled.

The 1960 Olympic Winter Games in Squaw Valley, Calif., marked a coronation of some of America’s best skaters. In that year, Carol Heiss and David Jenkins each won a gold medal and the pairs team of Nancy and Ron Ludington earned a bronze medal.

And then, as was typical of the time, they stepped off the podium and made room for the next generation of skaters to follow in their skates.

“Probably the most fulfilling performance we ever gave was at nationals that year in Seattle,” Nancy Ludington Graham said. “But standing on the podium and watching the raising of the American flag … that is something I will never forget.”

Little did anyone know back then how short the celebration would last. A year after those Games, with Heiss, Jenkins and the Ludingtons nestled safely in retirement, their heirs apparent, coaches and officials boarded a plane for the 1961 World Championships in Prague and never returned. On Feb. 15, 1961, the plane crashed, killing all 18 members of the U.S. Figure Skating Team along with 16 international officials, judges, coaches and family members on board. Twenty-seven other passengers and 11 flight crew members also died.

It was a tragedy that hit the skating world hard, but for the Ludingtons, it was especially difficult. In Heiss’s case, she won the gold medal, got married and went to Hollywood to film Snow White and the Three Stooges. Jenkins won the gold and pursued a medical career. The Ludingtons, meanwhile, were trying to eke out a living in coaching the next generation of elite skaters.

“Maribel was my best friend,” said Nancy Ludington, holding back tears talking about the loss in a recent interview almost 50 years after the crash. “Ron called me to tell me about the crash in the middle of the night. I immediately drove to Boston (from her home in Stoneham, Mass.) to be with skaters because there were several there for an ice show.”

One of those skaters in Boston was none other than David Jenkins. He took on the role of spokesman for the skaters when the media arrived.

“Gratefully, he pretty much protected the skaters,” Nancy Ludington said. “As far as managing that part of it, he was the hero.

“It was so painful. It was just a difficult time.”

For Ron Ludington, the crash was especially hard because he had been working with the U.S. bronze-medalist ice dancing team of Patricia and Robert Dineen. The Dineens, who had just become parents of a little boy, Robert junior, could not afford to cover the costs of having a coach travel with them to Prague for the World Championships. In those days, only the U.S. champions had their travel costs covered, and skaters had to pay for their coaches.

Ron Ludington, who was living at a YMCA in Norwalk, Conn., and was just starting out as a coach, couldn’t afford to make the trip to Prague. Neither could Sonya Klopfer Dunfield, the 1949 U.S. ladies junior champion who had coached the Dineens for three years.

Like most of the surviving members of the skating community, the Ludingtons spent much of the next month attending funerals. Ron Ludington was especially wrought with grief over the loss of his young pupils, but also for his many other friends, including 1961 U.S. ice dancing champion Larry Pierce.

During a recent interview at the University of Delaware, where Ludington has been skating director for 23 years, Ludington described an inside joke he had with Pierce. Ludington, Pierce and a group of other skaters had created a hand gesture — a five-finger salute — that became commonplace. In the famous photo of the 1961 U.S. World Team boarding the plane for Prague, Pierce can be seen making the hand gesture. Seeing Pierce in that frozen moment to this day causes Ron Ludington to smile.

The part of the tragedy that Ron Ludington still wrestles with is that his coaching career took off just as his friends’ lives ended. Because so many coaches were lost — Maribel Vinson Owen, Linda Hadley, Edi Scholdan, William Kipp, Danny Ryan and William Swallender — the United States had to rebuild not only its skaters, but also its coaching ranks. And it had to rebuild fast. Before the 1961 World Championships,

Ludington had talked with Ryan about taking him to Prague. After the crash, Ludington moved to Indianapolis to coach where Ryan once had.

“That was the toughest thing for me to deal with,” Ludington said. “I lost so many friends, but my career took off because of them.”

Dick Button, the two-time Olympic champion, once consoled Ludington, telling him, “You made those skaters better.”

Ludington went from Indianapolis to Detroit to the Skating Club of Wilmington and ultimately to the University of Delaware. He has never missed a U.S. Championships (as a skater or a coach) since 1956.

He missed the 1961 World Championships but went to the next 37 in a row, including the 1962 Worlds, which were held in Prague. There he coached Dorothyann Nelson and Pieter Kollen, who had won both the pairs gold and ice dancing silver at the 1962 U.S. Championships.

In the years following the plane crash, Ron Ludington talked about the role and the pressures the coaches had. He spoke with fellow coaches John Nicks, who came from England to guide skaters in California, and Carlo Fassi, an Italian skater who relocated to Colorado Springs, Colo.

“We knew we were in the hot seat,” Ron Ludington said. “We knew we had to do a job and we couldn’t screw up.

“We knew we had young kids coming up and it was just a matter of time before it was our time.”

Scott Allen earned a bronze medal at the 1964 Olympic Winter Games in Innsbruck and Americans Vivian and Ronald Joseph were awarded the pairs bronze medal after it was proven that Marika Kilius and Hans Baumler of Germany had signed a contract before competing.

But their fourth-place finish now stands because the ruling was reversed in 1984.

American coaches, however, were hoping to improve on those showings.

At the 1968 Games in Grenoble, France, Fassi led Peggy Fleming to the gold medal and Tim Wood, coached by Ronnie Baker, earned a silver medal. Fleming had been coached previously by William Kipp, who was killed in the crash. Ludington coached Cynthia and Ronald Kauffman, the four-time U.S. pairs champions, to a sixth-place Olympic finish.

“John told me we’d stay friends for life,” Ludington said before pausing to chuckle. “He said that would be true if I stayed on the East and he stayed out West.”

In ensuing years, the coaching tree branch that emerged from the plane crash blossomed. At the helm of that coaching hierarchy were Fassi, Ludington, Nicks and also Frank Carroll, a disciple of Maribel Vinson Owen. Carroll became most known for his work with Michelle Kwan.

Ludington’s own skating career is intertwined with Carroll’s. The two competed for the novice men’s title.

“He asked me what I was going to wear and I said black pants,” Ludington said. “So we both showed up wearing black pants. We looked like the Bobbsey Twins.”

They had gone from being competitors on the ice to coaching against each other off of it.

Nancy Ludington, meanwhile, also coached. She was remarried, to a physicist named Frank Graham, and they have been together for 38 years. She lives in Surrey, Maine, and continues to coach on a part-time basis with the Skating Club of Maine. Although she worked with the likes of Kitty and Peter Carruthers, who earned an Olympic silver medal, most of her skaters these days are in the sport for the pure love of it, not for Olympic glory.

Although she coached for a while following her Olympic experience and even was invited to co-chair the first U.S.-Canadian combined PSA meeting in 1973, she switched gears to focus on her family. She followed skating on TV and went to the U.S. Championships in Boston in 2001 to see friends, but she didn’t resume coaching until about six years ago.

“It is a passion for me and I love it and I’m thrilled for the opportunity to work with great, young kids,” she said. “I didn’t realize how much I missed it.”

She recently underwent back surgery and was away from coaching for about three months. When interviewed on the day she was to return to the rink for the first time since the surgery, her joy was evident in her voice on the telephone.

Ron Ludington, meanwhile, remains a regular presence at U.S. and international competitions. One of his current pupils is Melissa Bulanhagui, whom he coaches with his wife, Karen Ludington. Bulanhagui, who placed third at the Nebelhorn Trophy earlier this season, said she knows about her coach’s history and about the plane crash.

“I’ve heard the stories and I know how close he was with everyone then, but it’s not like he brings it up daily,” Bulanhagui said. “It’s nothing like a history lesson.”

Most of her lessons are spent focused on, well, skating.

Bulanhagui does realize the importance of the crash and said she is grateful for the funding she has received from the Memorial Fund, which was established as a living memorial in honor of those skaters who were lost in the plane crash. She also saw a preview of the upcoming film, RISE, and plans to see its premiere nationwide on Feb. 17. Part of the filming of the movie was at the University of Delaware.

She imagines she will learn more from her coach after that screening.

But Ludington said he tries not to talk much about the past.

“I don’t even think they could imagine that I could wear a pair of skates,” Ludington said with a laugh. “I know some kids looked me up on Google and some of them have told me that I’m on Facebook. I guess I am.”

In February, Ron Ludington plans to watch RISE, a movie whose story he lived through and a movie in which he appears. Nancy also plans to see the movie, saying, “How can I not see it?” But she hesitates to say whether she will see it in a theater.

“What I probably will do is see it privately, she said. “I think it will be too emotional for me to face, quite frankly. The memories might be too painful.”