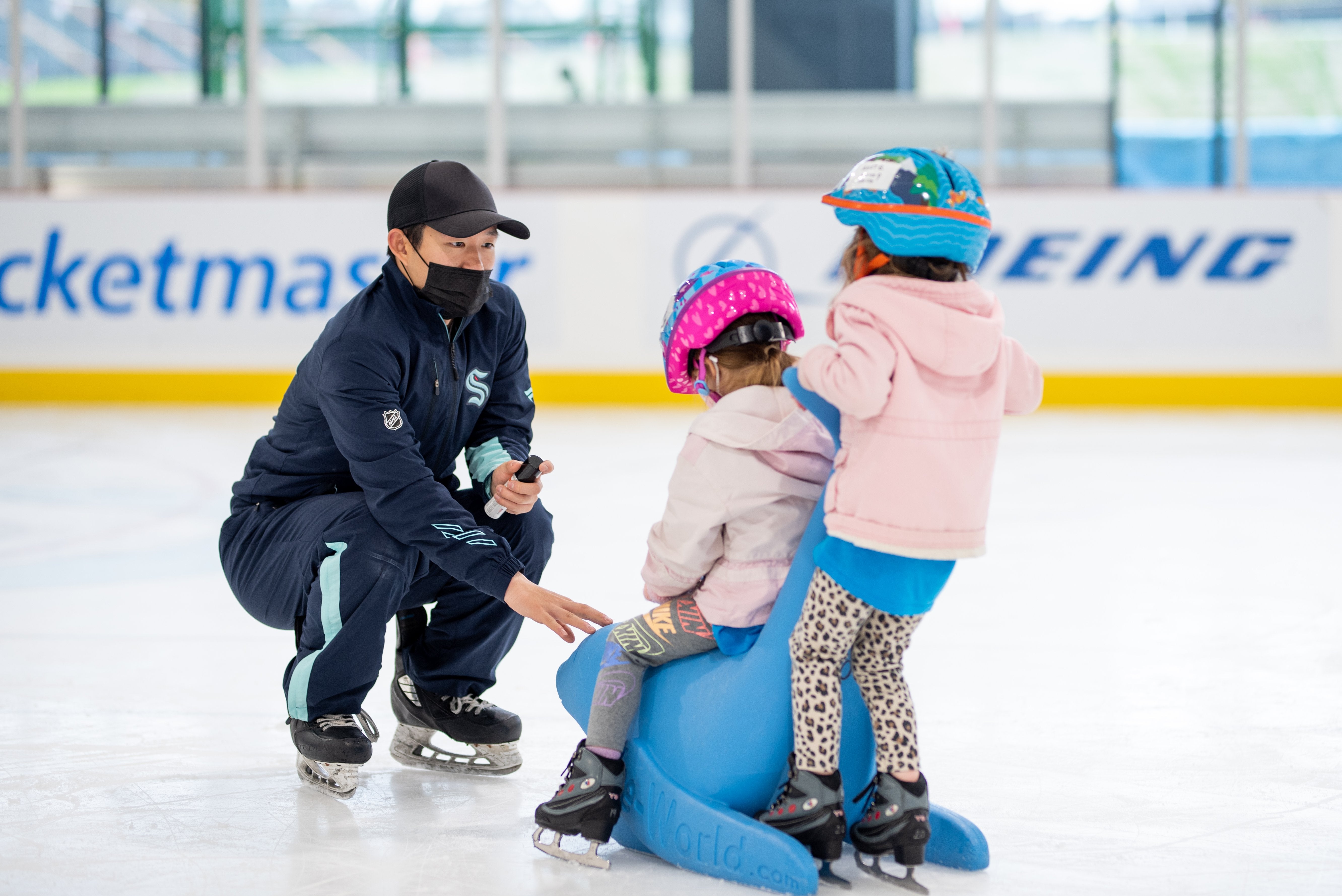 Last year, the Seattle Kraken hockey team became the newest addition to the National Hockey League (NHL). Already, the maritime city team has proven to be a force in the NHL. But, with the opening of the Kraken Community Iceplex, the Kraken committed to being an active community partner by creating access and opportunities in ice skating for marginalized and BIPOC people.

In September, the Kraken implemented a partnership between the One Roof Foundation, the philanthropic arm of the Seattle Kraken and Climate Pledge Arena, and the Refugee Women's Alliance (ReWA) to teach more than 60 preschoolers how to ice skate.

“About three years ago, the Kraken announced they were going to build a three sheet [ice] facility inside the Seattle city limits and make it available to the public. Mind you, there were zero ice rinks in Seattle before this,” said Kyle Boyd, the director of fan development for the Kraken. “Part of my job was to make sure, specifically, any child growing up down the street could walk in the doors and feel like this is a facility for them.”

During 2020, amid the COVID-19 pandemic and construction of the Iceplex, Boyd started looking for partners and organizations with similar missions serving underrepresented communities and were committed to creating systemic change through an equity lens. More so, he wanted to find a partner who understood the impact of investing in youth between 3-5 years old on the ice.

“While it’s great to bring in kids of all ages, it’s really important that we are starting and supporting youth of color on the ice at the same age as their white peers,” Boyd explained. “That’s what real equity looks like.”

“All of our students come from low-income families, are refugees, immigrants or minorities. Most of our families don’t have the option to put their young children in an extracurricular activity, especially an expensive sport like ice skating,” Lee said. “Learning to ice skate is not just for fun, though. It goes much deeper. This is about social emotional support and collaboration. It’s about building confidence.”

About a month before the lessons started, the students, families and staff of ReWA were invited to try ice skating for the first time. Lee shared how excited and enthusiastic everyone was to be a part of the event and break in the facility’s brand new skates.

“There was so much laughter, fun and just a little bit of chaos,” Lee remarked. “It was a real learning opportunity for all of us.”

That day also served as an opportunity for Lee and her staff to share their teaching styles with Chad Goodwin, director of the Kraken Skating Academy. According to Lee, over half of students at ReWA do not speak English yet.

“It’s really important to teach and model with gestures, hand movements and facial features,” Lee said. “Sometimes, kids will help translate for one another. Or, I will translate and explain to parents how they can support their kids.”

Boyd and Lee have coordinated a 32-week program to include 60 students – 20 from each of ReWA’s three early learning centers. Since the official launch of the partnership, students have taken buses from the early learning centers to the Kraken Community Iceplex every Wednesday morning. With the help of Lee, ReWA educators and parent volunteers, the students are laced into their skates and placed on the ice for their Snowplow Sam lessons with Learn to Skate USA® instructors. If they’re lucky, the ReWA kids are even able to catch a Kraken hockey practice and interact with professional hockey players.

“This experience has been beyond imagination. Parents can see for themselves what opportunities are out there,” said Lee, who, like Boyd, hopes these young skaters are able to continue past this program as hockey players and figure skaters. “The Kraken and One Roof heard what the barriers were, and they helped us eliminate them. [This partnership] really is bridging the gap of equity and accessibility. In 10 years from now, these kids could be Olympians who came from the Iceplex and from ReWA.”