Lorraine Burio recently passed her senior moves in the field at 62 years old. 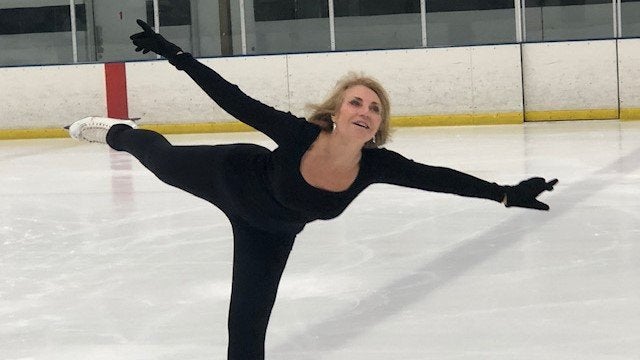 Lorraine Burio recently passed her senior moves in the field, a significant accomplishment.

Not impressed? Then consider that Burio is 62 years old. And, she completed the standard version of the test.

“Not surprising,” Missy Oliveira, one of Burio’s coaches, says. “I know Lorraine very well. And she wants to do things the same way everyone else does.”

Burio, an accomplished dentist who has owned her own New Fairfield, Connecticut-based practice since 1988, grew up in Brooklyn, New York, and “never did anything athletic at all,” though it wasn’t for lack of desire.

“I always wanted to ice skate as a kid, and did skate once at the Coney Island rink in Brooklyn and loved it, but never had the opportunity after that,” she says.

Then she met her husband, who was into almost everything athletic. He encouraged, and then taught, her how to barefoot water ski. Burio recalls it was a brutal sport to learn.

“Especially in the beginning,” she says. “I had black and blue marks all over my body. You’re going 45 miles-per-hour. It’s like a car crash every time you fall.”

But Burio stuck with it. Actually, she did more than just stick with it, she excelled. She and her husband competed for about 10 years, and in 1999 she won the first-ever Senior World Barefoot Championship.

It was around that time that Burio, again encouraged by her husband, set her sights on ice skating. She began by figure skating on roller blades at a nearby indoor roller-skating rink, practicing spins and jumps. Soon thereafter an ice rink opened 20 minutes from her home, and she began taking lessons.

“It’s very freeing,” she says of ice skating. “It’s a wonderful feeling being on the ice. And there’s always something to learn. The challenge of always having something to accomplish intrigues and motivates me.”

And, she admits, there are other benefits to ice skating. 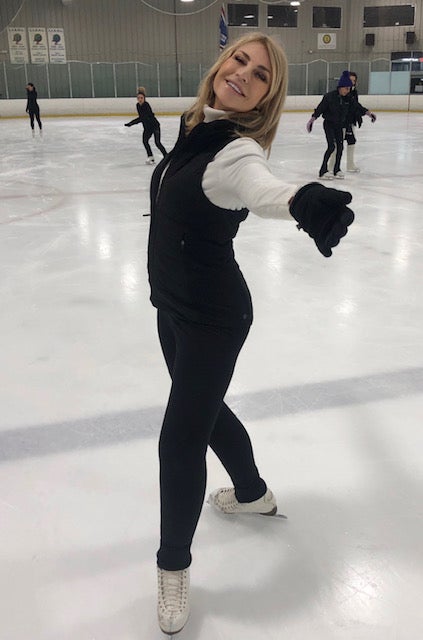 “It’s the one sport I can put makeup on to do,” Burio says. “You can actually look pretty while skating.”

Learning to figure skate wasn’t easy, but Burio says the skills and tools she acquired while barefooting complement those needed to succeed in ice skating.

“Barefooting is similar in that you’re balanced right over your feet,” she says. “You spin, you jump, you do turns on one foot. It’s all similar.”

Even learning how to fall while barefooting proved beneficial. Tim Covington, one of Burio’s coaches, loves the way she falls. He tells her that if younger skaters fell like her, they wouldn’t get hurt.

Burio acknowledges it’s all about technique.

“With barefooting, you learn to fall and relax,” she says. “Because if you don’t relax, you snap things.”

And snapping something, Burio says, is not an option.

“If I break an ankle or something, I can still work,” she explains. “But hands, wrists or elbows, that’s my biggest fear. I wear wrist guards whenever I skate.”

Armed and prepared, Burio was bound and determined to take and pass her senior moves on the standard track rather than the adult track. And it seemed every time she got close she would get injured and be off the ice for several months.

“I was starting to think I would never pass it,” Burio admits. “I had started to get discouraged, because it’s about speed. And when skating as an adult we tend to not be as fast as the kids.”

“It was something that was important to me,” Burio says. “It says something about your skating when you can do it at that level.”

The experience has been rewarding for her coaches as well. Covington says that one of the biggest differences in teaching adults is they always want to know the ‘why’ aspect. For example, why is a move done a certain way? Or, what is the history of a particular jump?

“It’s stimulating,” Covington says, “because I love explaining skating history to those who want to know.”

Burio, as you might imagine, is not done learning. She has not taken her open freestyle gold test, so she has her sights set on that. Ice dancing is also something that interests her. But competing, she says, is not currently on her radar.

“I competed so much with barefooting, and I love skating so much that sometimes when you incorporate [competition] into your skating it changes the way you feel about things.”

Burio says she is “living my childhood now,” and stresses the willingness to take up any sport at point in a person’s life.”

“An adult taking up tennis might not be as good as if they played as a kid, but they can still enjoy it, right?” she asks, rhetorically. “Skating is something I can do for the rest of my life.”